In my previous blog, "10 Hardcore WWE Moments To Show Non-Wrestling Fans", I had only mentioned 5 hardcore moments. Maybe some of you have noticed it already. Why didn`t I completed that blog? It`s because I don`t want to put a lot of things in a single blog. People get irritated sometimes, you know? LOL. So, yes this is the continuous part of that blog where I will list 5 more hardcore moments.

Well, in my previous blog I had mentioned how there were numerous times when my beloved friends had asked me what`s so special about professional wrestling? Why do I watch it? Are you a 12-year-old child? Don`t you know that wrestling is fake and scripted? To end that stupid nonsense, I thought to present a complete blog on those non-wrestling fans. So, without further due I would like to start "10 Hardcore WWE Moments To Show Non-Wrestling Fans: Part II". 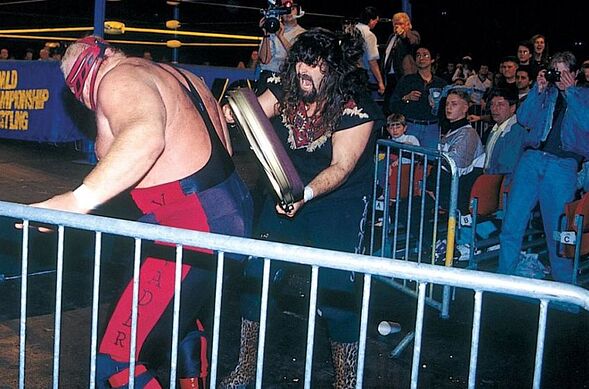 When I watched this match there was only one thing that came to my mind, what are they doing to each other? If any of your friends want a real fighting, then I would suggest this one. In 1993, wrestling fans witnessed a feud between Cactus Jack and that time champion Vader. The whole feud was well presented inside the squared circle and kind of hardcore as well. Vader literally beats Cactus with stiff punches which surely is a hardcore moment in World Championship Wrestling`s (WCW) history.

If you are a wrestling fan then you for sure already know about New Jack, right? New Jack was a professional wrestler who was famous for his extreme matches in Extreme Championship Wrestling (ECW) during 1990`s. In late 1999, former partners Mustafa and New Jack found themselves facing against each other and without a doubt it was extreme. The whole match showed the brutality between the two when they smashed each other with foreign objects. But, the match`s climax came when New Jack dives from the balcony on Mustafa who was duct taped on a table. Ouch! That was extreme.

One of the best matches in WrestleMania`s history happened when 2 legends faced each other at WrestleMania 24. Ric Flair was putting his career on the line against Shawn Michaels. This had automatically become an emotional faceoff between both wrestlers. Somehow if any of your non-wrestling friends don`t like it or understands emotions throughout watching this match, then maybe something is wrong with them. And not to forget the inaccurate moon-sault dive from Shawn on Flair, was the uncomfortable thing to watch. So, yeah this match was full of a roller coaster with ups and downs throughout the match with emotions at high stakes.

9. The Dudley Boyz vs The Hardy Boyz vs Edge and Christian at WrestleMania X-Seven

One of the best triple threat tag team match in the history of professional wrestling happened at WrestleMania X-Seven. Three of the best tag team of all time clashed over WWE Tag Team Championships in a TLC match. Continous crashing on the tables, hitting with the ladders and chair shots were a huge part of this match. But, the moment which stole the show was when Edge speared a hanging in the air Jeff Hardy from top of a ladder to the ground. One of my favourite matches to recommend a non-wrestling fan.