If you are a wrestler, then your only dream would be to main event WrestleMania. There are so many wrestlers who get a chance to shine at the grandest stage of them all, WrestleMania. It is a pay-per-view to shine like a star in front of a massive crowd of 70-90 thousand. Few wrestlers were so lucky that they got opportunities to main event WrestleMania more than once. Like Roman Reigns, Shawn Michaels, John Cena, Triple H, Randy Orton and list goes on and on. By the way, I hate Roman Reigns, LOL.

On the other hand, there are so many wrestlers, I rather say gems who didn`t get their opportunities to shine at the main event of WrestleMania. I really don`t know in what world WWE bookers are living in. Today, I will tell you names of those 10 Iconic Wrestlers who never got a chance to main event WrestleMania.

Mr Perfect is considered one of the best wrestler of all time. I am surprised to think that, not only Mr Perfect never had an opportunity to attend WrestleMania's main event but he never got any chance to win the WWE Championship. Mr Perfect, like his name, was the perfect Wrestler who had the skill of speaking on the mic as well as had the ring ability.

One of Mr Perfect`s favourite quote -

I am what I am, and I say, Im absolutely perfect!

WCW's last World Heavyweight Champion, Booker T never had a chance to participate in WrestleMania's main event? WOW. I do not know what is the problem of WWE. Booker T is considered as one of the best wrestlers of WCW roaster who never got a chance in WrestleMania`s main event. A more hurtful thing happened when he fought with Triple H at WrestleMania XIX only to lose. Well, at least he got the chance to win the World Heavyweight Championship once again with a new gimmick of King Booker.

One of Booker T`s favourite quote -

Now, can you dig that sucka??

In the case of RVD, we at least cannot say that WWE did not give opportunities to RVD. When he was at his peak, WWE gave him Money in the Bank briefcase, and after that, he became WWE Champion. He was also crowned with ECW Championship. He was cheered by fans, wrestling lovers admired him but despite all this, RVD did not work properly and during this time he was arrested in a drug case. The painful thing is that RVD is considered as one of the gifted athletes in the wrestling industry. 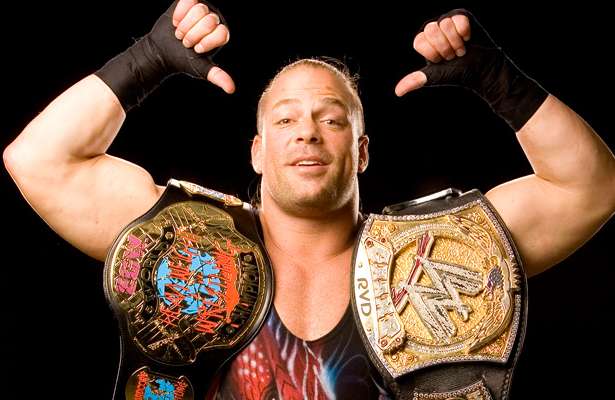 It doesn't make you bad losing to Rob Van Dam... it just makes you like everybody else.

One of NWA`s biggest wrestler "The American Dreams" Dusty Rhodes when came into WWE, somehow became a goofy character. A majority of people thinks Dusty is one the biggest icons in Wrestling business. LOL, still WWE never gave him the opportunity to wrestle in the main event of WrestleMania. What a shame!

One of Dusty Rhodes`s favourite quote -

While the boys are in the back, laughin' and jokin', the Dream's out back. cookin and smokin'!

Mysterio is arguably considered as the biggest Mexican superstar in history. A 3 time WWE World Champion, 1 time Royal Rumble winner and yet never main event WrestleMania. This must be some parallel universe we are living in. He has so much left in his tank so let`s see if we can see him main event WrestleMania in the future.

One of Rey Mysterio`s favourite quote -

I don't regret any steps that I take in life.

Another Hall of Famer who is remembered as the biggest wrestler, this business has to offer. Longest reigning Men`s WWE Champion in the history and yet never to main event WrestleMania. WWE`s booking system is kind of weird. Well at least WWE inducted him into the Hall of Fame before his passing.

Ricky`s story is same as Mr Perfect. A legend wrestler who never main event WrestleMania and never won WWE Championship. He won WWE Intercontinental Championship and carried that division with a good impression. He fought with Macho Man Randy Savage at WrestleMania III, which is considered as one of the best matches in WrestleMania. He even fought Chris Jericho at WrestleMania XXV at the age of 56 and he blew that match.

Again a WWE Hall of Famer, who lost his life at a very young age. A fan favourite wrestler who gave every moment of his life to this business, never main event WrestleMania. I wish, he could wrestle longer and entertain us. He never got his deserving WrestleMania moment and its a shame.

One of Eddie Guerrero`s favourite quote -

Everyone knows what Punk is capable of inside that ring. He is best in the world with a mic in his hand and has great moves to perform. Now he is retired from that ring and we can only pray for his return. Maybe someday, we could see him main eventing WrestleMania.

One of CM Punk`s favourite quote -

Haters are my favorite. I´ve built an empire with the bricks they´ve thrown at me. Keep on hating.

A 16 time World Heavyweight Champion and two times WWE Hall of Famer, Ric Flair never in his life main event WrestleMania. I can`t believe this, I really can`t. Everyone who watches wrestling or maybe watched it few times knows about Ric Flair. A living, breathing legend to hold most Championship reigns in the history of wrestling. Definitely, he is worthy of this spot on this list.

One of Ric Flair`s favourite quote -

So, guys, this was the list. Hope you enjoyed reading it. I will catch you soon with another blog. Meanwhile, don`t forget to check my other blogs -