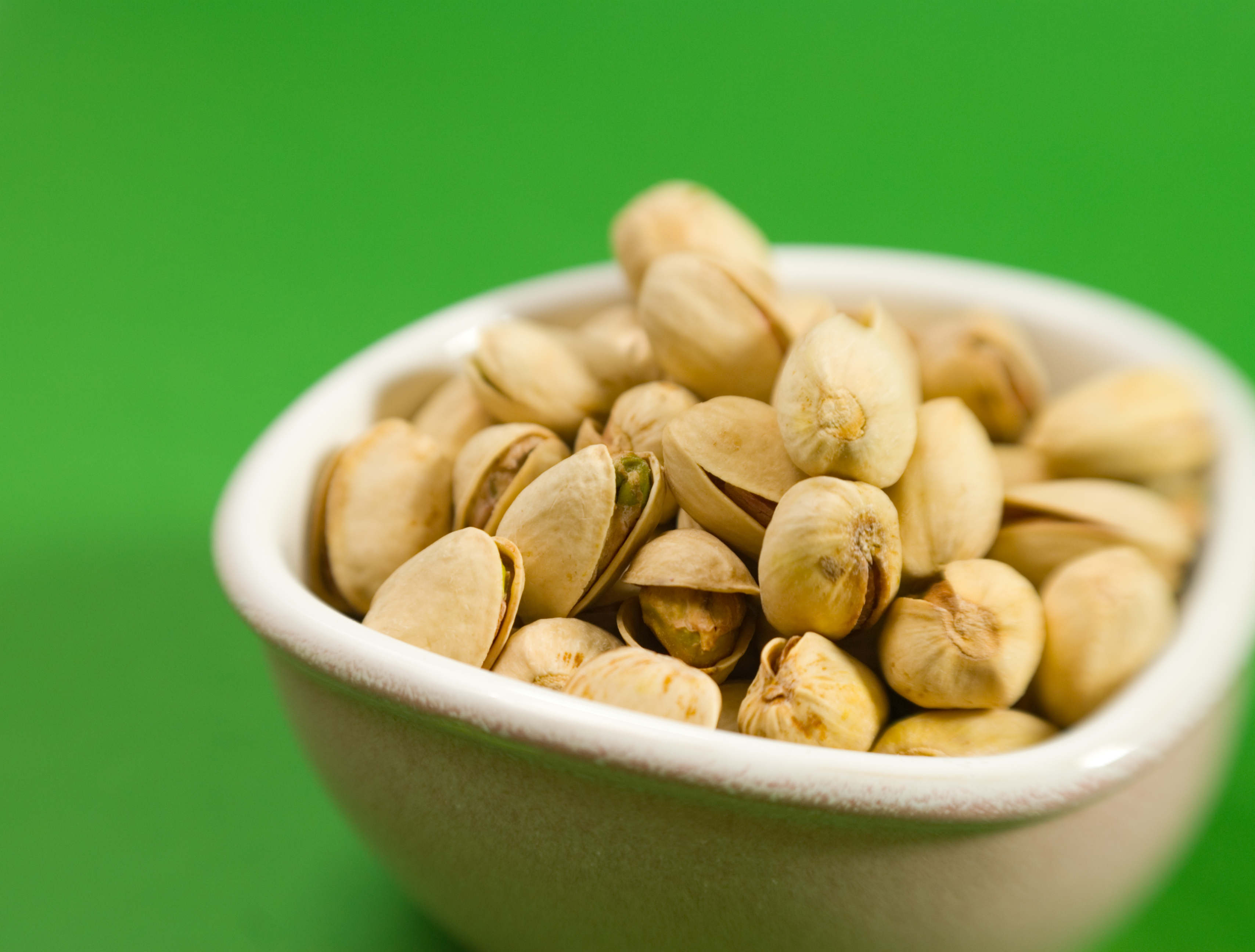 Trouble picking a favorite nut? Turns out that's not necessary.

"Some nuts get the spotlight more than others, but I don't think we should be exclusionist," said Beth Reardon. "If we favor one nut over another, we're missing out."

The solution? Mixed nuts -- one ounce, or about a small handful, per day, according to Reardon. Here are ten varieties you'd be nuts not to add to the mix.

Pistachios have a lot going for them -- a pretty green hue, a distinctive sweet taste, and a whole lot of health benefits.

Superpowers: A 2012 study showed that pistachios can reduce bad LDL cholesterol by up to 6 percent, which helps the arteries stay healthy and clear of plaque.

Pistachios are also a great source of gamma-tocopherol, a particular form of vitamin E, and may therefore help prevent certain types of cancer, Parkinson's disease, and Alzheimer's. They have a high amount of potassium, which keeps cells healthy, plus lutein and zeaxanthin, which promote eye health. Pistachios also contain high levels of antioxidants, which help keep cells safe from dangerous free radicals.

Power boost: Buy pistachios with their shells on. Behavioral eating studies have shown that shelling pistachios yourself and leaving the shells where you can see them might help you feel more satisfied with fewer calories.

Also, pistachios can reduce spikes in blood sugar after a carb-heavy meal, according to a 2011 study, so consider adding some to your next pasta dish for a satisfying crunch and extra nutritional benefit.

If you ask a personal trainer what her favorite nuts are, they're probably sweet, protein-packed almonds, which help people stay full and energetic between meals. The specific balance of carbohydrates in almonds also makes almond flour a great flour substitute for people who have trouble eating wheat -- make it at home by buzzing almonds in a food processor.

Superpowers: Want to lose weight? Try eating almonds. A 2003 study showed that people who ate almonds instead of other complex carbs lost weight and reduced their waist sizes. Like pistachios, almonds can lower cholesterol levels and reduce blood sugar spikes after eating, and a 2008 study showed that almonds can also reduce insulin secretion, which can protect against cardiovascular disease and diabetes.

What's more, almonds are another great source of vitamin E, which can help protect cells from free radicals.

Power boost: If possible, eat almonds with their skins on. Almond skins contain many different antioxidants, including 20 flavonoids that could be responsible for almonds' positive effects on cholesterol levels and heart health.

Walnuts are the world's healthiest nut -- at least according to Joe Vinson, a researcher at the University of Scranton in Pennsylvania. Throw some in chocolate chip or oatmeal-raisin cookies, or add them to a salad or a bowl of cereal.

Superpowers: Walnuts may help prevent or slow the progression of Alzheimer's. A 2010 study showed that mice with Alzheimer's showed improvements in memory, learning ability, and motor development when walnuts were added to their diet.

In a 2012 study, walnuts were shown to inhibit the growth of cancerous tumors in mice.

Feeling a little bloated and moody? Walnuts might help with that too -- they're a great source of manganese, a trace mineral that's been shown to reduce symptoms of PMS.

Walnuts are an excellent source of alpha-linolenic acid, one of the essential fatty acids that we have to get from our diet and that may help ease anxiety, depression, and stress.

Power boost: To get the full benefit of walnuts, make sure to buy them at a store with a high turnover, and store them in the fridge or freezer after a few days. (If they're in a sealed plastic bag or container, they should keep up to two years in the freezer.) The reason: Like many other nuts, shelled walnuts can go rancid easily due to their high fat content.

These curved kernels come from South America and other tropical areas. Salty and sweet, they're great in curries, stir fries, or straight out of the bag.

Superpowers: Cashews are packed with essential vitamins and minerals. They have high levels of iron, which helps all cells get enough oxygen, and zinc, which boosts immune function. Cashews' levels of magnesium may boost memory and help protect against cognitive problems, while their levels of copper and magnesium may help protect bone strength.

Power boost: Although most nuts are healthiest when raw, roasting cashews actually intensifies their antioxidant powers.

OK, these guys aren't technically nuts, they're legumes -- but they mingle just fine with their nuttier friends. Try adding some to Asian salads or grinding up some homemade peanut butter in your food processor.

Superpowers: Looking for an energy boost before a workout? Peanuts deliver a lot of protein with a relatively small amount of fat. Peanuts also contain resveratrol, the component in red wine that may help protect against Alzheimer's. 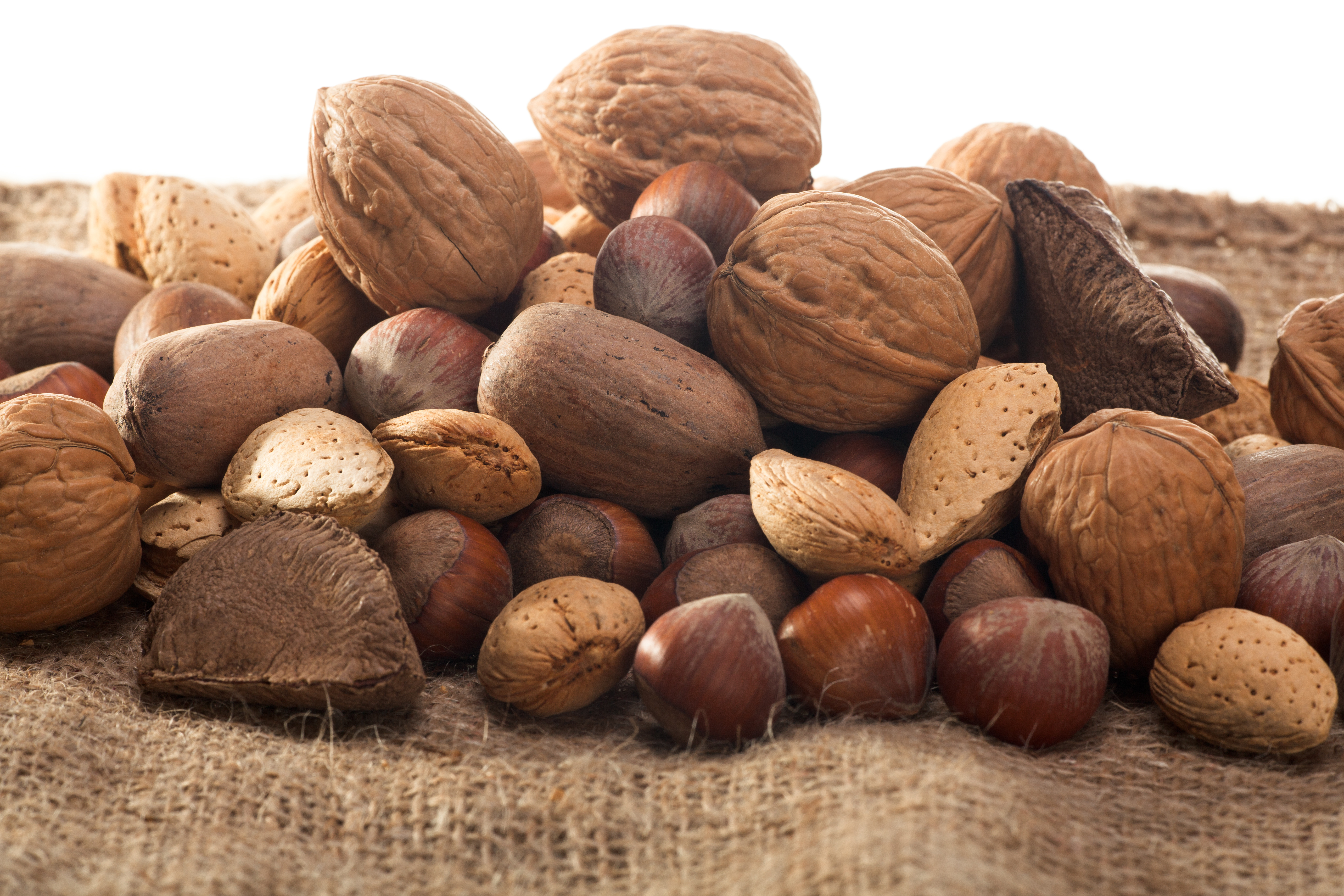 Only ever tried hazelnut flavor in coffee? It's worth picking up some of the real deal -- they're way more delicious. Hazelnuts are great in baked goods, like cakes and scones, and they're the healthy part of that jar of Nutella.

Superpowers: According to a 2010 study, hazelnuts boost good HDL cholesterol and lower levels of LDL cholesterol. They also have high levels of vitamin E, which is good for your skin and eyes.

Power boost: Want more antioxidants? Make sure to eat hazelnuts with their skins on. Baking recipes often call for skinned hazelnuts, since the skins can be a little bitter, but try it without skinning them for an antioxidant lift (and a lot less hassle).

These iconic Southern nuts may be synonymous with Thanksgiving pies, but you don't have to limit them to once a year. They're great in cookies, stirred into oatmeal, or tossed into a salad. A brewing company in Mississippi even makes pecan beer.

Superpowers: Like hazelnuts, pecans boost good HDL cholesterol and lower LDL cholesterol, according to a 2001 study. In fact, researchers found that adding the equivalent of a handful of pecans per day to participants' meals did a better job of reducing cholesterol than the American Heart Association's recommended cholesterol-lowering diet, and performed about as well as cholesterol drugs. Pecans are also a fine source of protein, good fats, and zinc.

Power boost: Shelled pecans can absorb odors easily, even in the fridge or freezer, so be sure to store them in sealed containers or food storage bags.

Macadamia nuts are buttery, delicious, and great in cookies. Don't write them off as unhealthy, though -- they have plenty of health benefits.

Macadamia nuts also have the highest level of monounsaturated fats of any nut, which boosts their ability to lower LDL cholesterol.

Power boost: Getting tired of cooking with olive oil? Pick up a bottle of macadamia oil. It has a high smoke point, so it's good for sautéing and frying, and it contains healthy fats and antioxidants, including squalene, which helps protect the skin from sun damage. The oil is pricey, but you might find its nutty flavor to be a nice change.

These South American powerhouses may take up a lot of room in the nut bowl, but they pack an equally powerful punch.

Superpowers: A single Brazil nut can fulfill the recommended daily amount of selenium, a key nutrient that may help prevent breast and prostate cancers. A full ounce of Brazil nuts may actually approach the maximum tolerable dose of selenium per day, so go with just one or two Brazil nuts instead of a whole handful.

Power boost: Like most fatty nuts, Brazil nuts quickly go rancid, so buy them in small quantities and store them in the fridge or freezer to keep them fresh longer.

Like peanuts, pine nuts aren't technically nuts -- they're the seeds of pine trees. They're great in pasta dishes, salads, baked goods, and cereal.

Power boost: Pine nuts can go rancid quickly, so either buy them unshelled or store them in the fridge or freezer.

Also, a certain type of pine nuts, from the species Pinus armandii (which are usually smaller and rounder than other varieties of pine nuts), can cause a syndrome called pine mouth, which makes foods taste bitter or metallic for a few days after eating the nuts. So look for pine nuts that are large and oblong.

Power boost: Peanuts rapidly lose both flavor and antioxidant power with storage time, so it's best to eat them soon after buying them.

Dark Chocolate and Its Healthy Benefits

Video credits: a2ztube NutritionviaYoutube When I was a kid, my parents will usually buy us plenty o…

Hello friends, Welcome to my another C blog which is about health tips Image Credits: Screen Shot …