10 Things You Need to Know About Bitcoins

If you have read about the Tor Network and the Introduction to Bitcoins, then you’ve probably heard about this underground currency and the anonymity it affords.

In this post, we attempt to identify some top 10 questions about Bitcoins to give you a clearer understanding of what it is, what it does and how you can use itto buy products or services online.

The Bitcoin is a form of currency without notes and coins, it is a digitalcurrency.

In this era of Internet and digitization, we’ve moved from phone to VoIP calls, face-to-face meeting to video conferencing, fax to email, cable television to IP TV, and the list goes on.

2. Who Developed The Idea Of Bitcoins?

The concept of Bitcoins was developed by Satoshi Nakamoto, who resides in total anonymity. He is said to be from Japan but his mail ID was from Germany, plus the bitcoin software was not available in Japanese. He developed the system and the Bitcoin software (that is used to run the system) in 2009 but disappeared into thin air in 2010.

The other developers of the system stopped hearing from him in 2010, and plenty of speculation turned up about his real identity. Some even suggested that his name was just a mashup of popular Japanese companies — SAmsung TOSHIba NAKAmichi MOTOrola. But what he created was definitely the fantasy of every tech guy in the world.

3. What Is So Special About the Bitcoin System?

The Bitcoin is a system which allows you to do anonymous currency transactions and no one will come to know about the payment or about all other info related to the payment, including who sent it, who received it, etc.

Satoshi did it by making the system – a peer-to-peer network – controlled by no central authority but run by a network of contributors and freedom enthusiasts, who donated their time and energy to this innovation. Essentially, people can do money transactions and no authority or organization will come to know about it.

Satoshi Nakamoto was so talented that he even solved the problem ofdouble spending of digital currency in his system.

4. What is Double Spending?

We can make many copies of digital data, e.g. people copy software and sell it as counterfeit or pirated copies. We may face the same problem with digital currency – one can copy the digital currency (let’s suppose USD10) and use it as many time as he/she like (as many notes of USD10).

Satoshi solved this problem by showing all transactions in a public list. Whenever a new transaction is made, its validity is checked by confirming from the list that the digital currency was not used before. This way, no one can copy the currency and use it for more than one time. It’s a simple but effective idea to stop double spending of the same bitcoin.

5. How Does A Public Listing Make Things Anonymous?

The public listing only shows the transaction ID and the amount of currency transferred. You will be anonymous in the system because you don’t need to provide any of your personal details like your name, address, email, phone number, etc. In comparison, when you use payment gateways like Paypal you have to give up all these personal details.

6. How do you use Bitcoins then?

Bitcoins are kept in a digital wallet which you can keep in your computer, or on a website online, which will manage and secure your wallet for you. You can have as many wallets and bitcoin addresses (where you receive money from others) as you like.

What’s more, you can use Bitcoin software on top of Tor to prevent anyone from tracking your IP address – total anonymity guaranteed!

7. How many people are using this?

At this very moment, 10.71 million Bitcoins are in existence, which is like 207.929 million USD worth! In fact, the Canadian government is working on their own crypto-currency, named MintChip. (a glance:)

8. How Do I Acquire Bitcoins?

Using and getting Bitcoins is really easy. There are various ways to get Bitcoins:

Mining is a process of extracting Bitcoins currency. Bitcoin mining is a business – most people mint Bitcoins to gain profit. Bitcoins are minted using a special software (known as Bitcoin Miner) which tries to find a new block in the chain of Bitcoin network.

Whenever a new block is found, its owner is gifted with 50 Bitcoins. Technically, a computer has to perform long and tough hash calculations to find a new block.

Spending Bitcoins is a bit easier. You can send Bitcoins to a person, buy goods, or donate to non-profit foundations who accept it, such as Wikileaks, P2P Foundation, Operation Anonymous, Free Software Foundation,Archive.org.

You can send Bitcoins to anyone once you know their bitcoin address.

For merchandise, you can buy products from merchants that accept Bitcoins. Example – BitcoinDeals.

The Bitcoin system is being quickly adopted. BTC1 having a worth of USD6 a year ago is now worth of USD19+. Security experts and digital freedom enthusiasts praise Bitcoin system for being a one-of-the-kind system thatopens doors to possibilities. Because of its guaranteed anonymity feature, it’s used by people who are concerned of their privacy.

As no authority can trace the transactions, this also lead to misuse of the system for example, in illegal work. But just because it can be used for illegal purposes, doesn’t mean we should do it. This article was solely written in an attempt to create awareness to readers about this technology. 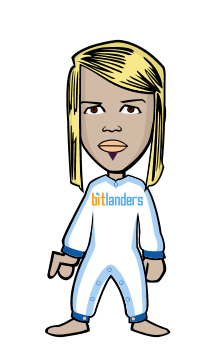 Earn some satoshi with easy way for daily bonus