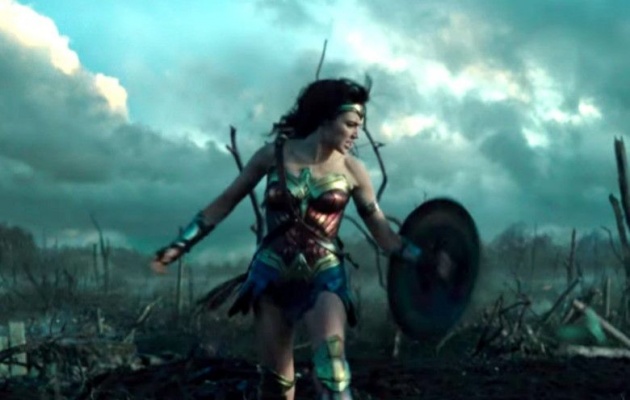 I have come late to the Wonder Woman party.

By the time I caught up with the big screen version of the popular DC Comics series, on Thursday 13 July 2017, the film had already grossed 373 million dollars at the US box office, making it at the very least the highest grossing live action movie directed by a woman.

Well, it is a superhero movie, you say. They have built-in audiences.

Perhaps - but you remember Catwoman starring Halle Berry in the title role, directed by Pitof.

No, you don’t because it tanked – as did Tank Girl and Aeon Flux.

This is because filmmakers don’t know how to make female centred superhero movies that audiences believe in.

The defining gesture that Diana (Gal Gadot) makes in the new Wonder Woman movie is the crossing of her arms in front of her face – a big ‘x’, a whacking great ‘no’.  ‘No’ means ‘no’, people. This is a message that we can – and should – believe in.

Wonder Woman has at least one scene that should become iconic. Diana and British spy Steve Trevor (Chris Pine) – yes, he is American but he’s spying for the British – are in a trench somewhere in Belgium (I think they mean Ypres) in No Man’s Land. Diana wants to stop Ludendorff (Danny Huston), who is set to unleash a deadly weapon that will decisively win the Great War for the Germans. She is convinced that he is Ares the God of War, supposedly rendered powerless by Zeus but who had gone into hiding, as Gods often do. Steve isn’t convinced, but Diana has amazing strength, can repel bullets and carries a sword. He isn’t going to argue with her. Steve tells her that the Allied forces fighting the Germans cannot advance. They have been in the trench an entire year, a whole twelve months, eating and pooping.

He doesn’t mention the eating and pooping bit. Nevertheless, she is in the trench with a bunch of men. They have barely moved an inch in 365 days. Imagine the odour, the collective sense of ‘whoever smelt it, dealt it – wait, it’s all of us!’

She wants out. But, wait, Miss, there is machine gun fire – German riflemen on the other side.

We can only imagine that the rank faecal smell that compels Diana to go over the top. Bangle-wrists in front of her face, she repels a sea of bullets to get to the other side, where she trashes a large machine gun. Well, what’s a gal got to do to find a ladies room - somewhere with scented lavender paper?

The sub-text of the gesture is that where men fight according to conventional wisdom, a woman cuts through all the b-s – quite literally if you imagine the battlefield. Who needs to men to sort out wars, when women can go straight to the heart of the matter? 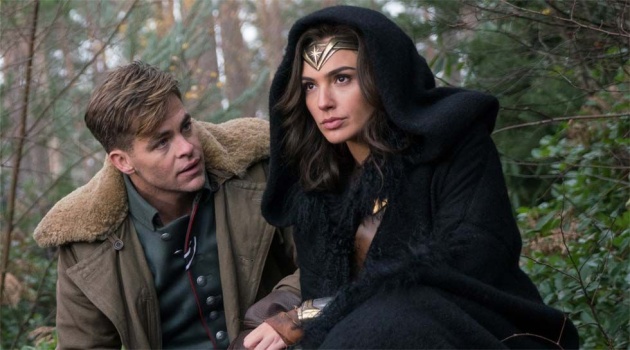 Still: Which part of 'undercover' do you not understand? Steve (Chris Pine) and Diana (Gal Gadot) prepare to crash a party in 'Wonder Woman'. Still courtesy of Warner Bros Pictures

Wonder Woman is about war and asks the very serious question, if you take out the figurehead, can you end a conflict? Killing Saddam Hussein or Muammar Gaddafi didn’t end violence in Iraq and Libya, any more that the shooting of Osama Bin Laden brought an end to Al Qaeda. So we know the answer. Wonder Woman is really asking the Hitler question – if Adolf Hitler had been killed could the Second World War – and the Holocaust – been brought to a swifter end. Only Diana can’t kill Hitler, Quentin Tarantino got there first with his ‘alternative facts’ genre piece, Inglourious Basterds.

The point of the film is that men make wars; women have to find some way of dealing with them. Diana’s eyes flare with incredulity. The answer is obvious, do away with men, except for nice ones with piercing eyes like Mr Trevor.

The film actually begins, after a prologue in Paris, with young Diana (Lilly Aspell, terrific) on a remote Mediterranean island. She is the only girl on an island of women. Instead of asking the question ‘why’, Diana is fascinated by the constant training going on around her, the dodges and the kicks. The women are in permanent readiness for an enemy they can only imagine. Or else Ronda Rousey’s keep-fit video ended up on the island and everyone is addicted. Diana wants to be a warrior like the older women but her mother, Hippolyta (Connie Nielsen) says ‘no’. Why can’t she fight? Because, she is told, Diana has a power which, if unleashed, will enable to Ares, God of War, to find her. Apparently Diana was created by Zeus – literally, we think, he and Hippolyta had a thing – to stop Ares. I’m not sure how this works exactly. At any rate, surely the women would want Diana to face Ares, get the fight over with, and party.

The script by Allan Heinberg does not make sense. Nevertheless, Diana is trained in secret by her aunt Antiope (Robin Wright), then having grown up is trained openly. In a fight, she unleashes her power and then a plane crash lands into the sea just off the coast of the island.

Diana dives into action and saves the young pilot, the afore-mentioned Steve, whom she brings ashore. At this point, the plot of the film resembles The Beguiled. He’s the only guy on an island of women. But this is a DC Comics adaptation so of course the Germans who shot down Steve’s plane discover the island of women and open fire.

The ‘opening fire’ bit isn’t logical, but it fits with the general thesis of the movie – men shoot first and ask questions later. How can this possibly be right? Because it is! The women defeat the Germans and suffer heavy casualties. Aren’t they supposed to be immortal?

Steve talks about the notebook he has stolen from a nasty woman called Doctor Poison (Elena Anaya). Does she also write pen letters? She is the Germans’ chief chemist and wears a mask that makes her look a bit like the Phantom of the Opera. At any rate, she can’t kiss or eat soup. Doctor Poison’s notes are in Sumerian, which fortunately, Diana can read. But I’m getting ahead of myself. First, Diana has to leave the island and enter the world of men, armed only with the knowledge of twelve volumes that tell her that there are better things than sexual gratification - the author is thinking of chocolate. She thinks her mother will disapprove but Hippolyta gives her blessing. In a small boat and without a compass, they end up on the River Thames, because, let’s face it there were signposts that told Steve where to sail. 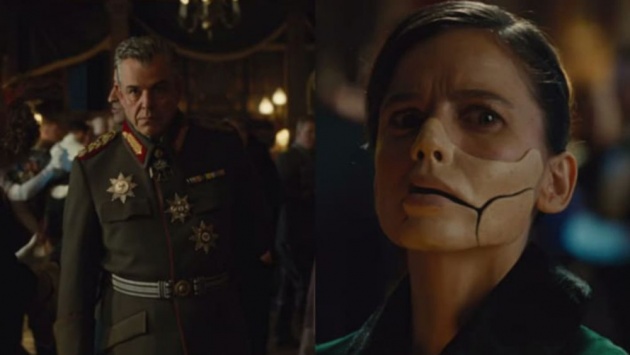 In real life, Diana would be detained by immigration officials. But this in 1918, not 2017 – Steve introduces her to his secretary, Etta (Lucy Davis, plummy) and takes her clothes shopping, before sneaking her into Parliament, even though women didn’t have the vote. There are German spies everywhere but they didn’t reckon on an Amazonian Princess who can deflect bullets with her wrists.

Diana does indeed translate the Sumerian for a bunch of Parliamentarians including Sir Patrick (David Thewlis), who like his colleagues, is committed to the signing of an Armistice. The Germans are fed up, though there is no mention that the forces of France and Russia were against them. Ludendorff has other ideas. He doesn’t want the Armistice. He wants to deploy a deadly gas, and has another gas to give him super-strength.

At which point, Diana and Steve recruit a misfit band of renegades, not exactly the Justice League, but Sameer (Saïd Taghmaoui) an actor, Charlie (Ewan Bremner), the world’s worst sniper and The Chief (Eugene Brave Rock), a Native American. What’s he doing in London – catching a show? Pygmalion is still on. They set out to the Front and now you are up to date.

Diana’s opening voiceover describes how she wanted to save the world but it got complicated. We find out why. In the process, she takes out a number of Germans and even leaps tall sniper towers with a single bound. (Isn’t that a Superman thing?) She uses the lasso of truth to find out if Steve is married – sorry, whether he is a good guy. The lasso truth is really good for determining what is in a can of provisions.

Gal Gadot’s central performance easily wipes outs memories of Lynda Carter spinning and transforming from a regular lady into a woman who has turned the American flag into a skimpy outfit. Diana has bosom hugging armour that leaves nothing to the imagination. Gadot plays her as a fish out of water who presses ahead – constantly moving forward like a shark. Diana is decisive, determined but strangely not sleep deprived. We never see her eat because this is a superhero movie – I don’t recall Captain America going to a restaurant. The urgency that she brings to every scene is balanced by her incredulity that men are so ineffective. This argument is pursued almost without debate. There is no mushy stuff because Ares has to be stopped. It is quite difficult to take a villain seriously when he is name is an anagram for – that’s enough.

Patty Jenkins’ direction apes the slow-motion action scenes of the film’s producer, Zack Snyder (300, Watchmen, Sucker Punch). The look of the film is less dark and foreboding than gloomy and under-lit. It is like seeing the movie through 3D glasses – only it is not in 3D. (Not the version I saw, anyway.) Chris Pine is a good foil for Gadot because he doesn’t assert himself – he is happy to let the movie be the GG show. Diana learns love and compassion and that dresses are great if you can hide your sword down the back – I’m not sure how that works exactly.

Some of the criticism of the film has been aimed at the actor cast as Ares – you think it is one actor but he can’t be Ares’ed, sorry, ‘ass’ed’. Personally, I thought he was fine. The point of warmongers is that they look innocuous.

There is another point too, that Diana has to lose something to release her true power. It works for this film, but I can’t imagine the sequel repeating the trick.

The popularity of the film isn’t just down to its gender politics and an appealing central performance – Gadot gives Diana dignity and gravitas. It is plain fun. It is also silly, which I hope I have demonstrated, but no sillier than the average superhero movie. I hope there will be a sequel, directed by Jenkins rather than a man, as is normally the way. Gadot and Jenkins have earned it.

Pictured: What is the secret of the ooze? Siobhan (Hermione Corfield) investigates blue sludge in th…