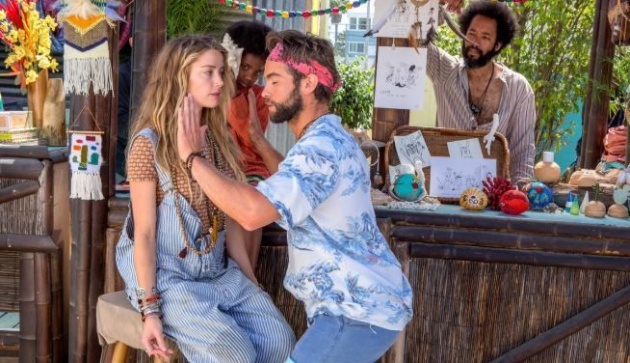 Pictured: Egon (Chace Crawford) gets close to Fanny (Amber Heard) watched by life partner Zander (Wyatt Zenac) in the ensemble film comedy 'I Do ... Until I Don't'. Still courtesy of The Film Arcade

After her 2013 critically successful debut, In A World… writer-director-star Lake Bell has found a more conventional use for three full stops in the relationship comedy, I Do … Until I Don’t. Essentially, it is several sit-com episodes strung together for a 106 minute feature film. Some of the characters could use a little more rounding and there is (spoiler alert) screenwriter 101 structure for an upbeat movie – begin with a funeral and end with a birth. Personally, I have a lot of time for screenwriting 101; usually, I see screenwriting 911. (‘Hello, my inter-racial buddy comedy isn’t working. What do you recommend? What do you mean, give up?’) I admire Bell for putting her character, Alice, in uncomfortable situations. Like having sex in a toilet cubicle where she noticed that the previous user – Alice’s husband, Noah (Ed Helms in a rare foray into a film that grossed under $1 million, if you discount The Clapper) - hasn’t flushed. Then there’s the movie-stopping ‘ball cupping’ scene. I imagine Bell had the idea, asked her cast (Dolly Wells, Mary Steenburgen and Amber Heard) who was going to do it, received no takers and then said ‘fine, I’ll go for it’. It isn’t the sort of set piece that will get her acting offers; then again, she’s made her action movie with Owen Wilson (No Escape). Career peaked.

The standout performance of the movie is given by Wells, a British actress who has worked with a significant number of women directors - Marielle Heller, Laurie Collyer, Shana Feste and Hallie Meyers Shyer - in the last 24 months. Hats off! She plays Vivian, a British documentary maker who has money from the BBC to make an exploration into the abject failure of marriage as an institution. She would be one of those people who thinks that the purpose of wedlock is to keep divorce lawyers in employment. This isn’t the first film to question ‘happy ever after’ – I mean, the sequel to the Disney musical Enchanted is called Disenchanted for goodness sake. But it is the first to do so with three dots in the title.

I spent some time wondering who Vivian, the director of ‘Tween Jungle’, a documentary that compares human teenagers to their animal counterparts, was based on. Had some British director like Molly Dineen or Penny Woolcock really hacked her off? Alternatively was Bell simply reverting to Hollywood type, casting the Brit as the villain? The difference between comedy and satire is that comedy is based on stuff that we all do - I mean, who hasn’t forgotten to flush? Satire is based on stuff that other people do. We’re not like them – they succumb to their own ego trip. When it comes to ego trips, it isn’t the journey that counts but the voice of the sat nav.

At any rate, Viv is just rebounding from a separation from her husband, Richard. Viv, Richard – Bell shows a surprising love of cricket, naming characters after the Antiguan cricket all-rounder, Viv Richards, known for his destructive right arm as both a medium break bowler and batsman, with 32 wickets and 8,540 test runs to his name. Viv has a theory that couples should contract to be together for seven years, with an option to renew. But everyone knows that sit-coms barely last seven seasons; why would one expect marriage to be different?

Viv has recruited three couples to be her subjects: estate agent Cybil (Steenburgen) and her motorcycle enthusiast husband, Harvey (Reiser), somewhere in their late fifties; swingers Fanny (Heard) and Zander (Wyatt Cenac) who are somewhere in Bell’s first draft; and Alice and Noah who run a failing blind business – they sell blinds in an area with a lot of sunlight, but that isn’t the problem. 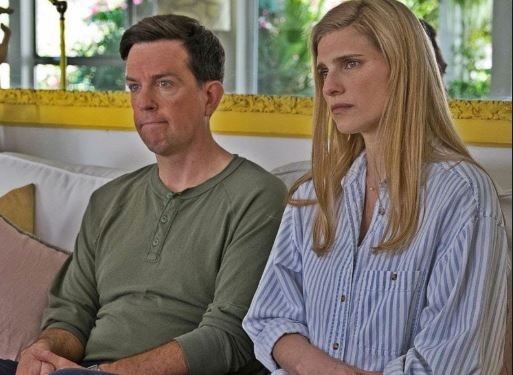 Pictured: Noah (Ed Helms) and Alice (Lake Bell) compare shirt buttons in the ensemble comedy 'I Do ... Until I Don't'. Still courtesy of The Film Arcade

The family business is a chance for Bell to engage in some pun-ative damage. I think punning is like an all-you-can-eat pizza bar that only has margarita pizzas – you can only stomach so much. I’ve been to that bar. It’s in Brussels. I didn’t tip. I can’t remember the exact puns that Bell used, any more than I counted those margarita slices, but they are of the order of Slat’s Entertainment or Blindingly Obvious. If Bell wants to write tabloid headlines, that’s fine.

Fanny and Zander are being paid $10,000 to participate. They have an open relationship and are therefore rare. Cybil has to promise divorce papers to get $4,000 – her husband won’t even take off his motorcycle helmet during dinner and he hasn’t even seen Wonder. Alice adores Vivian’s work. She practically has a girl crush. I’m not sure that documentary filmmakers are figures of romantic adoration. They can have more than one project on the go – just look at the work rate of Alex Gibney. They hide behind their subject and when you see them being interviewed, they look exhausted. So I had to accept Alice’s fandom through a leap of faith. Still, I’m sure Louis Theroux gets fan mail; maybe he was the object of Bell’s satire. The point though is that Alice and Noah aren’t being paid. They are cast on a trial basis, which I think is a joke just for documentary filmmakers. I can see Nick Broomfield splitting his sides.

Pictured: Lunch with Harvey (Paul Reiser) and Cybil (Mary Steenburgen) in the film comedy 'I Do ... Until I Don't'. Still courtesy of The Film Arcade

The comedy comes from Vivian wanting to spice up her documentary by introducing a stranger, Egon (Chace Crawford) who comes on to Fanny. Heard has made an on-screen career as a latter day femme fatale so it is refreshing to see her dialled down. Refreshing? Maybe I just mean weird. Egon just makes Zander possessive. Then there is a staleness in Cybil and Harvey’s enmity. Even couples on the verge of divorce are supposed to have chemistry. Cybil calls her daughter, Milly (Hannah Friedman) during a viewing, so she’s a little distracted. The couple viewing exclaim, ‘what about the price? Did somebody die here?’ ‘As a matter of fact they did’, Cybil explains flatly, ‘but it was through natural causes.’

Viv’s saving grace is her loyal assistant, Mel (Connie Shin), who can bail her out of the worst creative funk. Interview footage is poor, don’t worry, I know of a meeting of sex addicts. After Vivian comes on to Zander, the three couples plan revenge, otherwise known as the big climactic set piece in lieu of anyone undergoing an epiphany.

The film has a fair degree of laughs. That Noah is aroused by Alice’s breath is funny - well, random, at least. I was utterly charmed by the scene in which Cybil joins Harvey on a motorcycle ride, sitting in a reconditioned sidecar and Harvey pats her helmet. We don’t find out whether Alice and Noah sort out their financial woes; they do what you might expect, spend more money on advertising.

The serious part of the film involves Alice struggling to get pregnant, even though financially it’s a bad idea. This too is treated in a sit-com manner.

Films that position themselves as critiquing institutions generally end up adoring them. The disappointment of I Do … Until I Don’t is that we expect that. Even Viv gets her Hollywood ending – it involves a boom mike, in a manner of speaking. Overall, Bell displays second film syndrome. She offers us an experience that has no real point. Nevertheless, I enjoyed spending time with her characters, even in a low stakes concoction such as this. 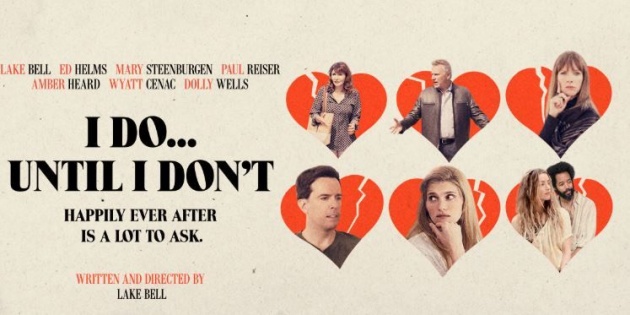