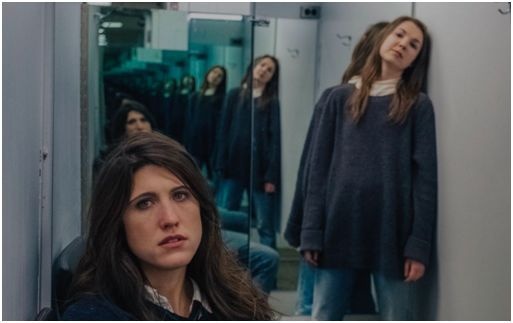 Pictured: Norah Sadava (standing) and Amy Nostbakken (seated) in a changing room in 'Mouthpiece', director Patricia Rozema's film version of Sadava and Nostbakken's play, in which wearing your mother's pullover is a bad thing. Still courtesy of TIFF/Telefilm Canada

Some bold creative decisions really pay off, others not so much. Mouthpiece, the latest film from Canadian director Patricia Rozema (I’ve Heard the Mermaids Singing, Into the Forest) falls into the latter category. It preserves the spirit of the one hour two-women-in-a-bath-playing-one-character play from which it is derived. In it, writer-performers Amy Nostbakken and Norah Sadava, who originated the material, appear in every scene as one character, Cassandra, a writer who is preparing to delivering a eulogy following the death of her mother, Elaine (Maev Beaty), a promising writer-editor who, according to Cassandra – well that would be a spoiler. The film builds to the Christmas party in which Cassandra – well, tall Cassandra (Nostbakken) - delivers some home truths. Short Cassandra (Sadava) isn’t exactly the peace maker; in fact I am not what she contributes to Cassandra’s split personality. She’s the one who doesn’t have sex but instead comments on tall Cassandra’s breasts – ‘they’re udders, be on the bottom.’  How helpful is that? If you’ve gotten naked in front of another person, you’re half way to an orgasm. The effort of the rest of it, rather than a sense of your own body shape, takes over.

Having two actresses playing one part isn’t new. Luis Buñuel did it in That Obscure Object of Desire, interchanging Carole Bouquet and Angela Molina as the lover of Fernando Rey’s character. What’s novel is that whilst everyone else sees and acknowledges one woman, Cassandra appears on screen as two. They party together, sleep together, remove their underwear at the same time and mourn the loss of their mother in unison. You think when you first see them that they are two people, uniquely in synch and equally not in control of a bicycle – wait, that comes later. They both refer to Elaine as mom. They don’t do everything at the same time – nor, it seems, do they have to pay for two meals. Whilst short Cassandra sleeps, tall Cassandra masturbates under the sheets. It is also unclear whether they share the same memories. Each decision that they make is motivated by a flashback, whether of Elaine adoring cedar (prompted by the question ‘what would you like the coffin made of’) or else admiring blue flowers (‘what should we purchase for the funeral’) or wearing a particular dress. Aunt Jane (Paula Boudreau) gives Cassandra the task of picking out the dress that Elaine should be buried in. Thanks, Jane! In Elaine’s home, they see the lemon cake in which Elaine’s face was buried when she had her fatal stroke. Yeah, tasteful!

Having two actresses play one part is good for horseplay. The two Cassandras push each other in the street like giddy schoolgirls. They express arrested development, profound immaturity and an inability to commit to one body shape. (I spend my life between growing then shaving off a beard, so can sort of relate.) We don’t see them doing the chores – so we never find out which of them does the washing. Nor do we find out which of them is more confident amongst women.

Cassandra’s brother Danny (Jake Epstein) doesn’t think it is a great idea that she delivers the eulogy. He is worried that she will say something even more inappropriate than she managed at the aforementioned Christmas party. Other family members agree. Cassandra is committed to the idea. What can she say about Mom? That she couldn’t maintain her relationship with Dad? That she didn’t write enough? That her earrings couldn’t get her back in the game?

We see young Cassandra (Taylor Belle Puterman) complain that her mother has rewritten a school essay using florid and very adult language, as if young Cassandra had swallowed ten years of psychoanalysis. Young Cassandra sees her mother return from a party, utterly defeated by company, with a ‘who am I kidding’ look. It’s the adult disappointment that a child should never see, believing entirely in a parent’s invulnerability.

The action takes place over 48 hours in which Cassandra talks to her brother, goes to the grocery store, shops for some nylons, drinks in a bar, has comfort sex with a man, orders the flowers, spends time with a lesbian friend (Jess Salgueiro), picks out a dress, looks at an article that she wrote, imagines drowning several times and, finally, recalls that darned Christmas party in which she drunk way too much and knocked over the Christmas tree, destroying a family trinket.

All the time I’m watching this, I’m not feeling a thing.

The big unanswered question is: at what point did Cassandra become two women, the ‘real’ Cassandra, the confident, talented woman who submitted articles on time, and the other Cassandra, who I guess doesn’t feel sexual? The filmmaker has to know. We don’t see two Cassandras in the flashback scene. Neither are the two Cassandras at different ages. My guess is that Cassandra split at the aforementioned Christmas party, one speaking truth to mother, the other embarrassed, guilty and mortified.

Except that there is nothing to back this up in Nostbakken and Sadava’s performances. The only thing that differentiates them (aside from height) is that Sadava doesn’t bare her breasts. If you have a divided self, shouldn’t you have a clearer dividing line?

The other issue is whether Cassandra should return to being one woman. This isn’t entertained. The only tension is whether her eulogy will be any good. There is a sub-tension (is that a phrase?): whether children should evaluate their own parents to their own standards. Two Cassandras can simultaneously be unperturbed and answer back catcalling. Short can be pushed in a shopping cart by Tall. There can even be a spontaneous musical number in the grocery store. Nostbakken also composed the musical score, sung without accompaniment.

Rozema contributed an anecdote from her own life in the screenplay, in which Elaine takes a pram for a test ride without realising that there is a baby inside – it wasn’t a shop model. It’s an amusing scene – the film doesn’t struggle for humour – but it doesn’t add anything.

The commercial chances of a film like Mouthpiece are low. Rozema’s attempt to tell the story within the play whilst retaining its gimmick is to be applauded. The finale doesn’t justify her aesthetic choices. If there had been a stronger link to the division of self and the trauma in the play, it might have been something. Rozema might have argued that you need to be two people to deal with death: one you is rational, dealing with the practicalities, the other is emotional, expressing grief and regret. That she doesn’t shape the material in this way is her way of saying ‘screw coherence, death doesn’t make sense’. That too has its own perverse, if unrewarding logic.