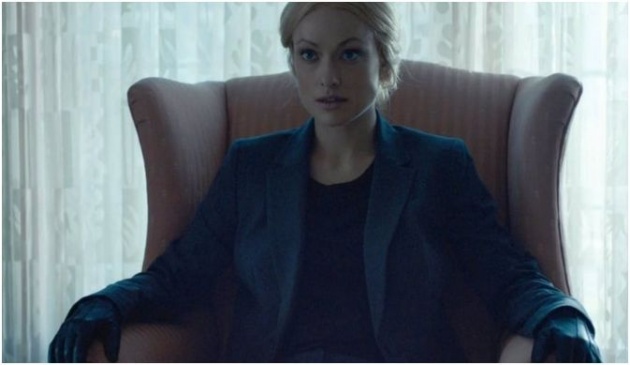 Pictured: Sadie (Olivia Wilde) is about to make demands of abusive husband number one in the film 'A Vigilante', written and directed by Sarah Daggar-Nickson. Still courtesy of Saban Films (US) / Signature Entertainment (UK)

Olivia Wilde conquered television in several seasons of House, the medical diagnosis drama starring Hugh Laurie that ran at least two seasons too long – when Gregory House drove through a wall, I was lost. Then she transitioned to movies, with supporting roles in Tron: Legacy and Cowboys and Aliens. Then she turned to directing: her 2019 debut feature, Booksmart, a broad comedy about two nerdy high school students who decide to party on the night before graduation (why not after – because it needs an ending) is currently in cinemas and has grossed $16.2 million dollars in the US alone after 14 days of release, not bad for a film without stars – Lady Bird took thirty-one days to reach that figure. Last year, Wilde went full Edward Woodward.

Woodward became a big star in the US as The Equalizer, a vigilante who got justice for people who had none – equalling up the scales, see. Sadie, Wilde’s character in the film, A Vigilante, written and directed by Australian-born, New York City-based Sarah Daggar-Nickson, does the same thing. A victim of an extreme form of domestic violence – her husband (Morgan Spector) killed their son Cody and slashed Sadie’s back several times - Sadie advertises her services informally. Abused woman can call her number. If they begin with the words, ‘I’m looking out the window, and the trucks won’t stop coming’, she will answer, if only to correct their grammar, ‘it’s looking out of the window’.

Invariably wearing a wig or changing her hair colour, Sadie arrives at the house wearing black leather gloves. She’ll tell the abused wife to go to another room. She will make a demand of the abusive husband: ‘you will sign over the house and three quarters of your savings to your wife. Then you will leave. If you try to hurt her or the children, I will kill you.’ The man will laugh. Then Sadie gets to work. 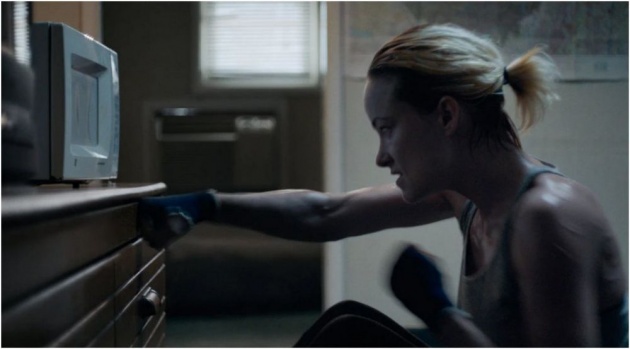 Pictured: I bet no-one asks her to plank. Sadie (Olivia Wilde) exercises at home in front of the microwave in 'A Vigilante', an American film written and directed by Sarah Daggar-Nickson. Still courtesy of Saban Films (US) / Signature Entertainment (UK)

Daggar-Nickson doesn’t show Sadie inflict the blows that will force men to do as she says. She does not want to make pleasurable the visual spectacle of Olivia Wilde kicking backsides. We see the afters: a man in a suit with a bruised face signing a form, then phoning his bank in a quiver to arrange the transfer.  We see Sadie’s afters: the bloodied knuckles, the trip to the gym, punching the heavy bag, over and over. She traces a drawing, a doodle, really, that she keeps pristine in plastic. She screams, a wrench of pain, as if in permanent child birth. She goes to a bar to drink whiskey, although she would be better off buying a bottle and drinking alone.

The film – at least the first two thirds - is interspersed with scenes of Sadie at group, listening to stories of abuse, how the women had their sense of self taken away from them. These are women who escaped. They had undertaken ‘the leaving moment’, words handwritten, something women are asked to relive, as it defines them taking back control of their lives.

At first, the drama appears to be sequential, as if Sadie returned to group in between meting justice. In fact, the group scenes are flashbacks. Sadie is combing a vast area of forest, which she shades on a map. We don’t see her doing this, but she’s searching for her husband. As he has not been declared dead, she cannot collect on his life insurance. Even if he were, wouldn’t she be suspected of murder? Insurance companies are not charities. 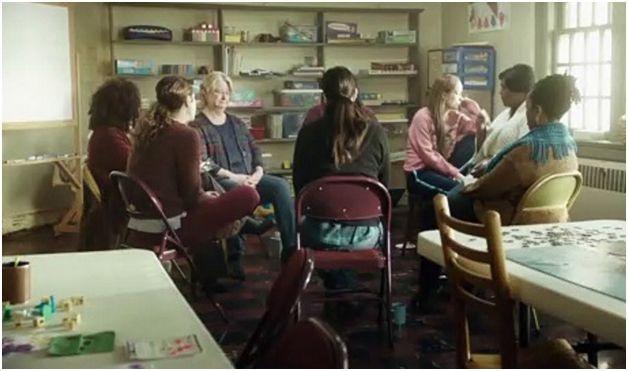 Pictured: When can we finish the puzzle? Women who have escaped abuse share their stories in 'A Vigilante', an American film written and directed by Sarah Daggar-Nickson. Still courtesy of Saban Films (US) / Signature Entertainment (UK)

We see three instances of Sadie ending domestic abuse. In the second, the man is bound and gagged in the family home. The wife wants to give Sadie more money, but she won’t take it. ‘I wish I didn’t have to ask,’ she says, apologetically. In the third instance, Sadie knocks on the door of a house. A young boy answers. ‘I saw you in the store,’ Sadie explains. ‘I thought you needed help.’ The boy lets Sadie in. The mother, the perpetrator of abuse, is lying on the sofa. Sadie pours a saucepan of water on her midriff. That wakes her up. When the mother fights back, Sadie slams her again a door frame. She finds a key and frees another child, who has been kept prisoner. She tells the boy, the freed one, that they’ll be taken into care but if he gets into trouble he is to give her a call. ‘Why can’t we come with you?’ the boy asks reasonably. ‘You wouldn’t be safe,’ Sadie explains. Plus it’s like totally illegal. The boy doesn’t Malala her (see Booksmart).

About that ill-advised lone drink in a bar: Sadie is asked by the bearded barman, ‘where do I get my forty per cent?’ (This is a reference to the hit of alcohol.) ‘I just came here for a drink,’ Sadie responds. Walking back to her car, she is attacked by two men. Sadie fights back and leaves them reeling. ‘Don’t do that again,’ she hisses. She is an expert in Krav Maga, a form of self defence developed for the Israel Defence Forces, combining wrestling, boxing, judo, aikido and karate moves, basically ‘attack is the best form of defence’. We see her (in a flashback) pick up a paperback Krav Maga manual – it is quite thick – and bend it as if about to tear in half. However, Sadie is no book burner. 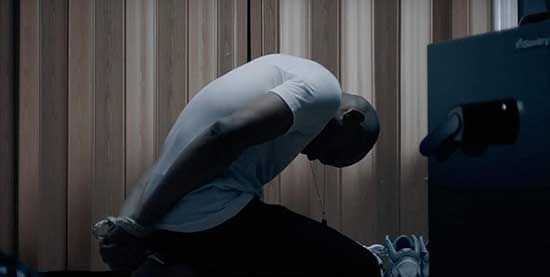 About two-thirds of the way through, the film’s rhythm changes: Sadie looks at her shaded map and notices a spot in the centre, like blood. Then she is knocked unconscious. It is the strike back that we anticipate – obviously there are a lot of abusive husbands who want vengeance – but the perpetrator is not who we expect.

In the last third of the film, generic contrivance kicks in. To get free having been bound with duct tape to a chair and left alone whilst her attacker goes out to get food, Sadie digs her nail into a vein and bleeds. Then she has pulled a real nail out which she uses to cut the tape. I know what you’re thinking: huh? I think she somehow pulls the nail out of the chair, not that she has one secreted in her arm. At any rate, incredulity is elicited. She attacks him unsuccessfully. I don’t think her heart is in it. He pisses her off by tearing up her son’s picture. He also smashes one of her hands. Somehow she flees and runs to a bunker that has a trampoline that she uses to block the entrance. While inside, she binds up her injured arm. In the end she faces her attacker across an empty swimming pool, describing his twisted need. Then she rushes him.

Logic will tell you how this should end up. However, this is the movies, a world where the death of people with long charge sheets (list of felonies) isn’t investigated, even on the insistence of the insurance company. It is a world in which a person can stride purposefully with a black briefcase before the credits roll.

A Vigilante isn’t entertainment. It cannot offer catharsis. No amount of money – even if paid – can make up for the loss of a child. It describes a social problem without really suggesting how it should be stopped, or even what is at the root of male violence against women (gratification through the use of power). It does not suggest how love and trust can be repaired. It does say that the vigilante urge is a mask for something else: pain. We know this from the Batman movies. It says that women can acquire the strength to fight back, that men should accept responsibility for their actions. It also suggests that the subject cannot be tackled without resorting to B-movie dialogue.

Wilde is the reason to see the film, portraying a committed, complex woman living in a world of pain. There is an irony: just as she delivers her best screen performance to date, Wilde has stepped behind the camera. A Vigilante suggests that cinema’s attempt to show powerful, physically confident women on screen is still a work in progress. But then Sadie’s confidence can only co-exist with pain.