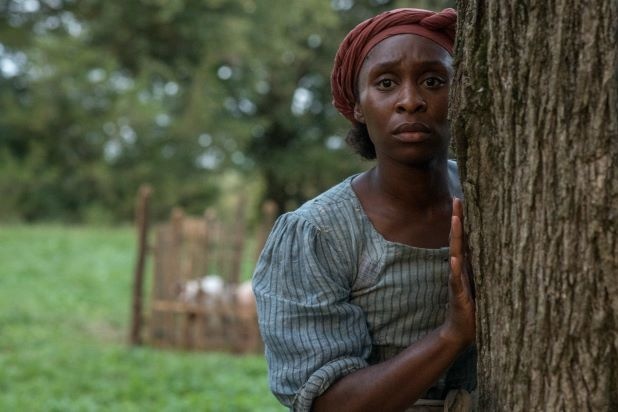 'Review the film in front of you – not the one you want it to be.'

Harriet, the first ever screen biopic of ‘Underground Railroad’ conductor Harriet Tubman, is on the face of it conventional. We first meet her in Maryland, 1848 as Araminta ‘Minty’ Ross Tubman (Cynthia Erivo) an indentured slave who has received a letter from a lawyer telling her that she can be freed (though she cannot read it herself). Her master Gideon (Joe Alwyn) won’t honour it, even though his family committed to releasing her mother from slavery when she turned 45; the commitment would also free Minty and her sister. Gideon has a soft spot for Minty, on account of her looking out for him when he was a sickly young boy. He gave her permission to take a husband. For her part, Minty won’t bear children until she is pronounced a free woman; she won’t allow a child to be born into slavery as she was. She also has visions, signalled by a blue filter being applied to scenes. They mostly involve family members in distress. When Gideon advertises his plans to sell her, Minty decides to flee.

First, she says goodbye to her husband, a freed slave. She won’t let him travel with her lest his freedom be taken away as punishment. Next, she has to say goodbye to her mother, who is out working. To do this, she sings a farewell spiritual. Then she says farewell to her father, who tells her to visit the Reverend. Then she says farewell to the Reverend who tells her to seek out the anti-slavery activist, William Still (Leslie Odom, Jr) in Philadelphia, Pennsylvania. The screenplay, by Gregory Allen Howard and the film’s director Kasi Lemmons, is expositional, giving characters a destination before we see them heading off. Yet Lemmons also normalises Harriet’s sixth sense. You might describe the film as the first ever black female superhero movie directed by a woman.

Given the choice between a raging river and a search party advancing at either side of a bridge towards her, Minty cries ‘liberty or death’ and jumps into the water. She survives and hides in the back of a haycart that (conveniently) takes her closer to her destination. ‘You can get out now,’ says the kindly cart driver who sees her wander off without so much as a ‘thanks for the lift’. Well, she has given so much free labour in her life without a ‘thank you’, she doesn’t know any different. She makes it to Philadelphia, is given directions and a free apple by a kindly stallholder – every place nearby is ‘half a mile away’. Then she meets William who immediately secures her a place to stay and paid employment (emphasis on paid). He also invites her to shed her slave name. Minty to decides to take her mother’s name and re-christens herself as Harriet Tubman. She is also implored to take a bath, because she stinks to high heaven. Cue a scene where she shows the whip marks on her back.

One year later, Harriet decides to return to Maryland to re-claim her husband. She makes an uncomfortable discovery. Thinking Harriet perished in the river, her husband remarried. His new wife is now expecting a child. Technically, he is a bigamist, but Harriet does not seek to make trouble. She doesn’t return to Philadelphia empty-handed either. Rather, she leads nine former slaves to freedom, earning an induction into the ‘Underground Railroad’ as a conductor.

The ‘Underground Railroad’ isn’t a literal railroad, with tracks and steam trains. Rather it is a network of hiding places for slaves fleeing across country to states that have outlawed slavery. Harriet’s gender allows her to escape notice. Slave owners look for a man christened ‘Moses’ rather than a woman.

How did Harriet earn this unlikely nickname? During her second flight from Maryland, she arrives at a river. The escaped slaves, one of whom is holding a baby, are too frightened to cross. Harriet has faith, wades into the water and carries on walking until she practically reaches the other side. Her flock follow her.

Although Harriet believes that God speaks to her through visions, she doesn’t quote scripture. Her faith is not bound by the book. In her first meeting with William, she recounts a head injury caused when she was thirteen years old. Taking note, William writes down ‘brain damage’. He keeps a record of all the slaves who have come to him for assistance. There are white businessmen sympathetic to the anti-slavery cause, who acknowledge her respectfully.

The success of the ‘Underground Railroad’ leads to the introduction, on September 18th, 1850 of the Fugitive Act, which allowed Southern slave owners to reclaim their slaves living on the territory of so-called free-soilers. Harriet and friends flee to Canada – cue a cheer from the Toronto audience, with whom I saw the film. However, this is no answer.

Harriet decides to free her parents and her sister. Suffering a loss of productivity, Gideon and his mother behave in a more cunning manner, separating Harriet’s sister from her baby, so she cannot run. Indeed, she doesn’t. Harriet has more success liberating her parents, though mother confuses her with a vision from heaven. ‘Mother, you haven’t died,’ Harriet/Minty assures her in one of the few moments of humour. (Another involves a riff on Jaws: ‘we’re gonna need a bigger cart’.)

In the film’s final act, Harriet receives some horrifying news, but rescues her niece. She is aided by a guide who was treated disrespectfully by Gideon. Gideon has a vicious ally, a ruthless (African American) tracker who commits one of the most shocking acts of violence in the film. The finale has the two men – Gideon and his tracker – chase down Harriet, having discovered her alias.

The film’s production values are handsome, though at one point a bridge is used twice as Harriet and some smuggled slaves hide in the base of a cart. Lemmons doesn’t cover the American Civil War (April 12th, 1861 to April 9th, 1865) but she does show a group of angry landowners descend on Gideon’s farm demanding reparations. ‘It was your slave that took ours away from us,’ they fume. Gideon’s mother gives the ‘let’s all work together and fight back’ speech, motivated by a fear of bankruptcy. A moral war, against two incompatible value systems (and I write this on the eve of a government-enforced, opposition-enabled ‘no deal’ exit from the European Union) is inevitable. 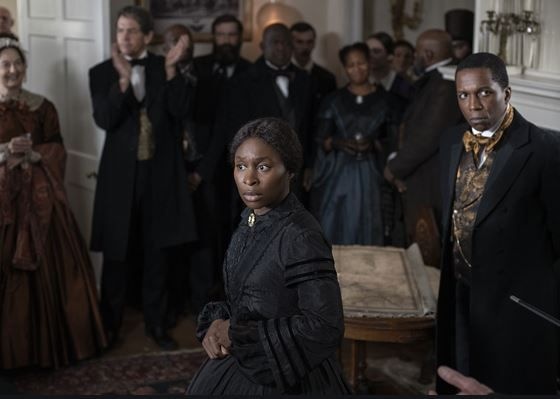 Lemmons doesn’t delve deeply into Harriet’s psychology. There is the suggestion that she didn’t re-marry until much later in life because she still felt married under God. She doesn’t question why God would choose her – and her alone – to receive visions, though we can rationalise these as well-founded fears rather than messages from a Divine Creator. Lemmons makes clear that Harriet did not approve of killing. Though she has opportunities to shoot her enemies at close range, Harriet chooses to wound rather than take a life. Lemmons posits her as a different sort of hero, not as a male substitute.

Early reviews have indeed damned the film as ‘conventional and rather prosaic’ (Variety) and a ‘rote biopic’ (Collider). These critics are missing the point. Lemmons is appealing to a broad family audience - in particular, those individuals who might have switched off when learning about Tubman in 4th or 5th grade. It is these people who are the rejectors of racism of the future and they need vivid incarnations of role models, rather than just black and white photographs.

Not all of Tubman’s accomplishments can be encapsulated by one movie. Nor should the story of the ‘Underground Railroad’ be restricted to her alone. Harriet is a better, braver film than the reviews suggest, with a riveting central performance by Erivo. Lemmons avoids the empty catharsis of a film like Jojo Rabbit when a figure is symbolically kicked out of a window. It isn’t a righteous act of violence that will end right wing carnage, rather an appeal to real, humanist values.