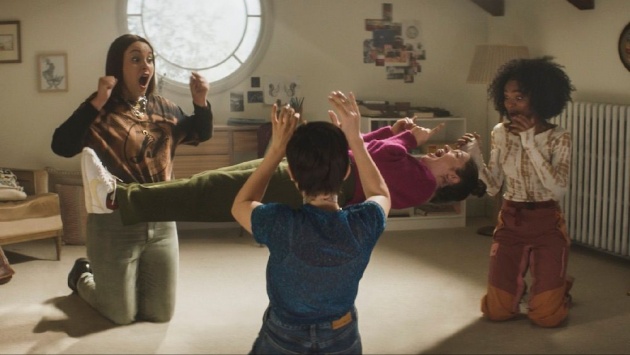 Pictured: 'Oh spirits that tend on mortal thoughts/Un-vex me here/And fill me from top to toe/With stuff from New Look'. A scene from the film 'The Craft: Legacy', a sequel, written and directed by Zoe Lister-Jones, to the 1996 film. featuring Zoey Luna (levitated), Gideon Adlon, Lovie Simone and Cailee Spaeny. Still courtesy of Sony Pictures / Red Wagon Entertainment / Blumhouse

Film history is full of sequels that no one asked for: Critters 2, Critters 3, Critters 4. By no one, I mean no audience member. Generally, sequels are payback time for the producers. They can get them greenlit because the original made a mint - only this time, they’ll get a better cut. They can also get actors who wouldn’t otherwise snag a leading role to star in them. ‘This will showcase what I can do,’ says a would-be heart throb, ‘right before I get killed by the monster.’ When I watch horror films made twenty years ago, I am surprised to see who is in them. Michelle Williams and Joseph Gordon-Levitt starred together in Halloween: H20 Twenty Years Later - that’s the cast of an Oscar nominated movie. Sequels trade on name recognition but that usually means the name of the serial killer or fast-multiplying threat. No one wants to see Joseph Gordon-Levitt in Halloween: H20 – they want to see Michael Myers.

The Craft: Legacy is one of those sequels that I didn’t see coming. It doesn’t have a monster, only a spell-book. The Craft, released in 1996, was a film about a trio of high school witches (Fairuza Balk, Neve Campbell and Rachel True) joined by a newcomer (Robin Tunney). The Craft: Legacy, released twenty-four-years later, is about a trio of high school witches (Zoey Luna, Gideon Adlon and Lovie Simone) joined by a newcomer (Cailee Spaeny).

OK, it’s a bit like a remake. Only it isn’t. Lily (Spaeny) has her problems: a difficulty making friends. She has a pageboy haircut and a Carey Mulligan vibe, but she never knew her dad and that kind of sucks. Her mother (Michelle Monaghan) is taking her to live with her new boyfriend Adam (David Duchovny) who is like an outdoors Mr Brady type (from The Brady Bunch). He has three boys of his own, only the youngest of which, Abe (Julian Grey) is tolerable. Her two stepbrothers, Jacob (Charles Vandervaart) and Isaiah (Donald Maclean Jr) are best friends with Timmy (Nicholas Galitzine) who is a ‘D-Bag’. When Lily starts bleeding in class – the only blood you’ll see in this movie, by the way – Timmy makes a comment.

Our three witches are clearly one short – the wicked (by which I mean cool) witch of the west. They chant spells that they cannot finish – no fun at all. A pre-credit sequence features Lourdes (Luna), Frankie (Adlon) and Tabby (Simone) seated in a circle trying to get one of their number to play two parts, only they are too superstitious to do so. This is not a film in which you ask: how did they get their powers? This is a film where you just accept that they have access to the supernatural that can make them communicate telepathically and move large objects – well, Timmy.

Timmy, we discover later, lost his mother and communicates with her using a Ouija board. I found myself predicting what she would say: ‘clean your room’. (Maybe the line is in the film’s trailer.) It is notable that Jacob, Isaiah and Abe also do not have a mother. There is a suspicious absence of adult women in this community.

Not that writer-director Zoe Lister-Jones makes a point of this. Lister-Jones made Band Aid, a comedy released in 2017 about a couple who turn their disagreements into songs and form a band with their next-door neighbour. It featured a sex scene in which one lover catches their foot in a mouse trap. I wouldn’t describe Lister-Jones, even after watching The Craft: Legacy, as having a feeling for horror. The nearest she manages to a jump scare is cutting from a shot of a window during the day to a shot of the same window at night. That’s it. There’s a snake in the grass as well, but that doesn’t count. Nevertheless, I would credit Lister-Jones for having a feeling for female friendship - as well as an obvious punchline.  She likes her characters. They don’t curse others. (Well, maybe a bit.) They ignore insults and walk through the canteen proud and in slow motion. And they can stop time long enough to remark to one another, ‘whoa’.

Lily’s three new best friends aren’t defined as characters. They have faux witty dialogue. ‘I don’t like Beyoncé,’ remarks Tabby, as if betraying an icon of pop, ‘I love her’. They work collectively without ego. They are probably not like the friends you or I had at school but instead resemble the three witches featured at the beginning of Macbeth, who instead of saying, ‘twice the brindled cat hath mewed,’ simply took a chill pill.

After her classroom accident, Lily is surprised when Lourdes, Frankie and Tabby talk to her through the bathroom door. Tabby even loans Lily her shorts – ‘they’re sweaty but they’re clean’, which Lily accepts gratefully. They channel their power through Lily, so she propels the repulsive Timmy against a row of lockers after he whispers innuendo in her ear. This gets her detention (so unfair) but then they talk to her telepathically: ‘ask to go to the bathroom’ and ‘take your bag’. As she leaves, Timmy trips her up. Her friends have something in store for him - a spell. 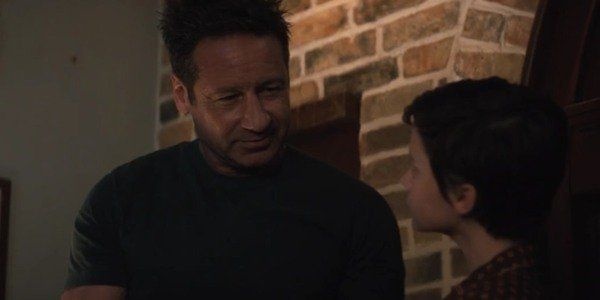 But what of Lily’s stepfather-to-be, a motivational speaker with a following? Adam is the author of a book, ‘Hallowed Masculinity’. He’s a Men’s Rights activist. Interesting idea, but Lister-Jones doesn’t know how far to push this. Adam meets with his sons and a group of strapping young men. As a group, they bang sticks together. Watching them, Lily learns something uncomfortable, something connected to Timmy – but not his sweater.

Abe apologises for his father to Lily, after he scolds her for ‘attacking’ Timmy. The three brothers were raised not to be violent and yet they hang out with a bully. I liked Abe. He’s the only sibling who wishes Lily a good first day at school, before she starts bleeding. Unlike her mother, he doesn’t try to get her to sing along to Alanis Morrisette in the car in the obligatory ‘driving through a forest to our new home’ scene.

You wait for the film to go dark, for magic to have real world consequences. A character dies. There is talk of shape shifting and then Adam pretends to be Lily’s mother asking her to give up her power, which sets up a link to the first movie. Lily also upset her friends by using her magic independently. They blank her at a funeral reception but when she is in danger come to her rescue.

The film’s CGI budget is not high. There is a major effect involving fire that is just about good enough (but not convincing). At one point, Lily and her friends jump from a first storey window after stealing something from Timmy’s room for their spell. We never see them leap. Instead, Lister-Jones cuts to the next scene. You feel the budgetary limitations.

In another scene, we see Lily’s mother with a drawer full of papers carrying them to a room. Later, Lily will discover some papers connected to her, including one which prompts the ‘why didn’t you tell me?’ speech.

In the end, Lister-Jones doesn’t dwell on the fact that Lily left three boys not only motherless but fatherless. Instead, she skips off to a secure medical facility to meet someone who may know who she is.

Skipping over details like how death is processed or even how to land after jumping out of a window makes for a shorter movie but also an unsatisfying one. The girls remark with delight that they have used a ‘bong’ as a cauldron, but this scarcely counts as humour. The end credits are interesting, revealing The Craft: Legacy to be the first film that I have watched that boasts a Covid-19 supervisor as well as a Covid-19 [mitigation] strategy. I suppose we will see this a lot more in Hollywood productions. 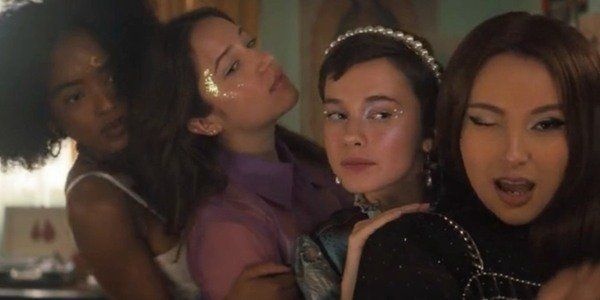