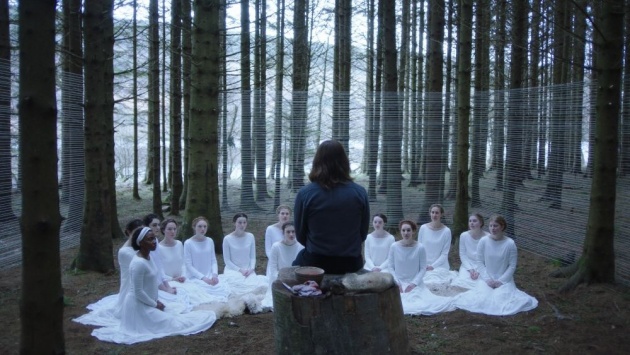 Pictured: Tending to his flock, Shepherd (Michiel Huisman, centre) speaks to his daughters in a scene from the film, 'The Other Lamb', written by Catherine S McMullen and directed by Małgorzata Szumowska. Still courtesy of IFC Films (US) / MUBI (UK)

Films do not have to mirror reality, but they ought to show possibilities. The Other Lamb, the first English language film from Polish director Małgorzata Szumowska, working from a script by Australian author Catherine S. McMullen, does exactly that.

In this drama, a dubious contemporary John the Baptist known only as Shepherd (Michiel Hausman) surrounds himself with women – wives dressed in thick red dresses, daughters dressed in blue – all of whom love him. They live in a forest, the daughters in a caravan with Shepherd’s likeness painted on it, the wives in a small house. Only Shepherd is permitted to spin yarns; when the women congregate around him, they are literally surrounded by string, as if caught in a web. When a child asks her half-sister Selah (Raffey Cassidy) to tell her a bedtime story – the two girls live in the daughters’ caravan – the other sisters interject, ‘you’ll get Selah into trouble’. During an infrequent tête à tête with Shepherd, Selah asks him to tell her the story of how he met her mother. Shepherd, as his prerogative, does not do so.

The film wears its influences lightly. A touch of M. Night Shyamalan’s The Village – a community living by its own rules away from 21st Century society. A frisson of The Beguiled – women doting on the only man in their midst. A soupçon of The Handmaid’s Tale too – a religious order in which women sublimate themselves to patriarchy. In narrative terms, it is closest to the latter, with Selah clashing with Shepherd after she starts to menstruate.

Being the sole source of law, Shepherd nevertheless has a problem: even though they are dressed differently, he cannot tell the daughters from the wives. Like many men actively seeking attention, he is also deeply insecure. When one of the women suggests the direction in which they should travel, after they are forced to move on by a passing sheriff, he repeatedly kicks and derides her.

How the fallen elder women found Shepherd – or how he found them – is not explained. Why they remain loyal is easier to deduce. He provides order and certainty and is ever present. How many husbands can say that?

Present in being, perhaps, but not in emotional availability. He certainly has his tastes. During a meal, he wanders down the line of wives until his hands rest on the shoulders of one of them. She will be sharing his bed that night. Shepherd exerts his power by showering the women and girls with compliments. Compliments and a gentle caress – the feeling of fingers on their faces daubing lines of sheep blood like war paint. The wives and daughters are both ecstatic and orgasmic.

The film begins with a young woman in a white nightdress underwater, then cuts to two daughters (in blue dresses) glimpsed through a waterfall; we only understand the image after a cut from the girls’ side. Cinematography Michał Englert makes a major contribution – he is credited as co-director on Szumowska’s follow-up, Never Gonna Snow Again and co-scripted Szumowska’s previous film, Mug. At one point, Selah walks up an incline and Englert creates the effect of her almost hugging the landscape. In another scene, when Selah rests near the edge of a precipice, the moment is captured with a triple-reverse zoom, the camera zooming into Selah as it simultaneously retreats, changing the perspective as Selah retains her space in the frame. The effect is dizzying, though diminished on the small screen.

Selah is given the task of supervising a lamb’s birth. She falls asleep. When she awakens, the mother is dead and the lamb fighting to stay alive. Selah’s mistake is partly attributable to her discontent, not just because Shepherd failed to answer her question but because she resents one of the new wives being the same age as Shepherd’s daughters. After a row with a wife – daughters aren’t supposed to question wives – Selah is ordered to deliver leftovers to ‘the hut’. There are two women in there, a younger one whose face isn’t visible, and an older one, Sarah (Denise Gough), who has lacerations - lash marks - above her bosom, the result, we surmise, of a punishment meted out by or on behalf of Shepherd. Sarah lives in exile off the scraps of the flock. She remarks (sarcastically) on the bounteousness of their offering (the small amount of food that Selah has brought). The other girl, Sarah remarks, is fasting. The two of them face off. Sarah tells her to leave but Selah asserts herself. Nevertheless, a bond is formed, or at least the beginnings of one, as Sarah recognises in Selah someone equally headstrong and bound to shake her invisible chains. 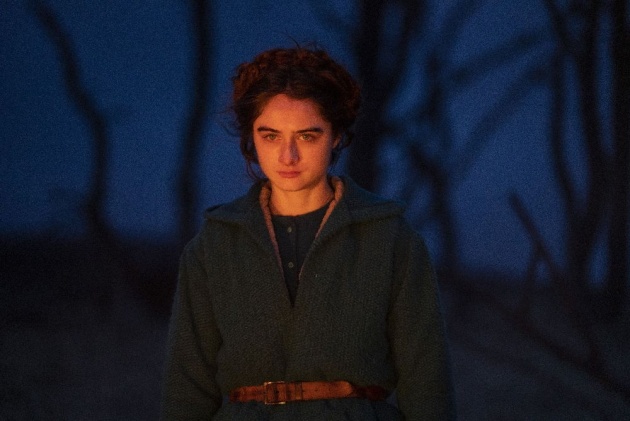 Pictured: Belt up. Selah (Raffey Cassidy) in a scene from the film 'The Other Lamb', written by Catherine S. McMullen and directed by Małgorzata Szumowska. Still courtesy of IFC Films (US) / MUBI (UK)

The film is a slow burner. The daughters all share the same bed which fills the room from one wall to another. Some lie left to right, others right to left. After the sheep dies, Selah starts to bleed herself and with menstrual pain comes an awakening – that the Shepherd will come for her. One night, she looks out of the caravan window and sees Shepherd in mid-seduction of one of the wives. He looks straight at her.

When not in the immediate company of Shepherd, the women sing folk songs, including one about two women dying. The inference is that mothers and daughters meet the same fate – death in Shepherd’s nominal care is inevitable.

The glimpse of the red, blue and white lights of the police car jolts us out of the rural idyll. Selah sees Shepherd talking to a cop, the only other man, we surmise, that she has seen. It is strange that she isn’t more intrigued by the sudden appearance of a stranger; she doesn’t ask questions about where he came from. We assume that the women all know about and reject the outside world. It is like knowing that Canada is close by but choosing to live in the United States, believing it to be better governed. We understand why Sarah is kept alive – as a reminder of the price of transgression.

Selah learns more from Sarah than from Shepherd about her mother, not how she lived but how she died. As Sarah explains, Sarah’s mother was fine after giving birth, but then she got an infection. Shepherd refused to take her to a hospital. So she passed away. As the women march towards their unspecified destination, one of them gives birth and, like the sheep, dies. Shepherd has her body burnt in a funeral pyre. He wants to kill the child – a boy – too, but Sarah won’t let him. It is implied that Shepherd rejects boys because they represent a challenge to him. He wants to remain inseminator-in-chief. Sarah leaves the group, taking the boy child with her, though unable to give it mother’s milk.

During their journey, Selah stops at an abandoned house and becomes transfixed by a painting of a landscape, the sole remaining decoration on the wall. The women ask if they can settle at the house, but Shepherd declines, saying it is a ‘broken thing’. Although Shepherd, by his own declaration, rescues women, he doesn’t fix broken things. Instead, he wants to rid them from his sight; not that he says that in so many words.

Finally they reach their destination, which is the location in the painting. ‘Behold’, Shepherd says to the women, ‘I give you Eden’. He baptises the women in the water. When it is Selah’s turn, he holds her under the water for much longer than the others. We return to the image at the start of the film.

There is a flash-forward – or perhaps a dream – as the daughters all attack Shepherd (like the women in The Beguiled). Then a revelation: the daughters awaken to discover the wives have disappeared. ‘I did what had to be done,’ explains Shepherd, at least according to his own definition. There is another flash forward, two policemen getting out of their car to discover the bodies of the wives at the river. Then they detect the lacerated, naked body of Shepherd, strung up and left for dead. The daughters congregate at the waterfall. They are happy.

Szumowska only shows its aftermath of violence or the gesture of Shepherd kicking, not the victim being punished (though we hear her screams). Violence is not aestheticized. The film also includes a curious scene – suggesting a parallel world – of Selah in a school uniform being driven (by her parents?) past the flock of women being led by Shepherd. This isn’t your normal out-of-body experience where you see yourself from afar. This is seeing yourself in a completely different social situation. We read this as Selah imagining herself in the back of a car being driven to her destination – not having to walk – in some other life. What Selah sees (or imagines) is coloured by longing, though she does not see her mother and does not imagine Shepherd telling her the story (which she must know) of how they met.

The editor, Jaroslaw Kaminski, also makes a major contribution with flash forwards. They anticipate what the audience is thinking in that split-second of thinking it. Viewers – and readers – always try to get ahead of the story; involved in the imagery or prose, but simultaneously projecting ahead. The flash-forwards say, ‘I know what you’re thinking and maybe you are right. Here you go’. Without flash-forwards, when viewers wait to see their expectations eventually being met, they are disappointed. When their expectations are met in the moment they are formed, such disappointment is diffused. Szumowska can do this because the entire film is fragmentary. The foreboding style, building a sense of menace, allows for this.

It is significant too that the surviving daughters don’t march back to civilization, although, without a man, they are destined to die out. There is another way to live, albeit for a finite period. Perhaps one of them, after a time, will search for Sarah and the unnamed baby boy. 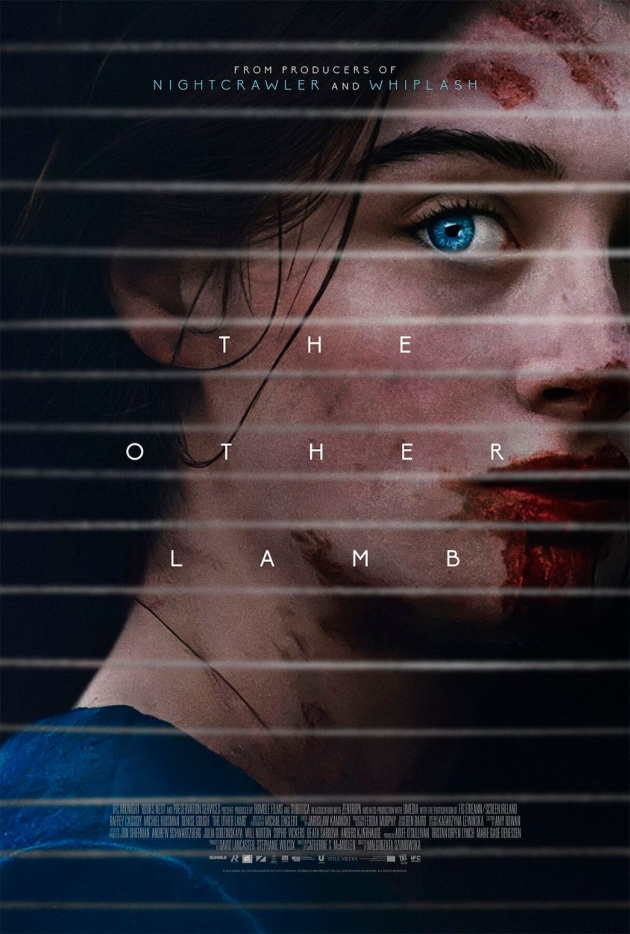