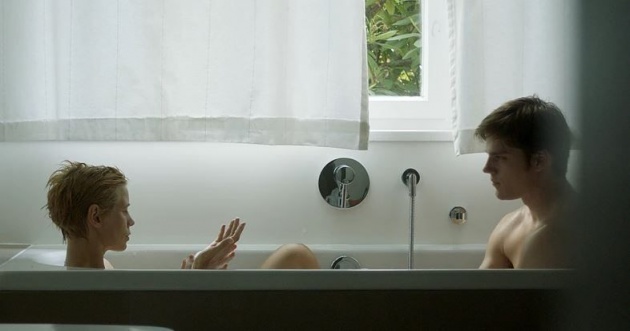 What sort of woman sleeps with both a man and his adult son in the same house? In her second feature film, Ein fisch der auf dem Rücken schwimmt (A Fish Swimming Upside Down), Bulgarian-born, German-based writer-director Eliza Petkova doesn’t answer this question directly. However, she drops a heavy hint.

At dinner, some way into the drama, crop-haired Andrea (Nina Schwabe) is asked about her past, having just heard a story how Martin (Theo Trebs) had cut the roses from the family rose bush to present to his teacher. Andrea deflects the question: ‘I can’t remember anything. I have no past.’ To me, this means one thing: trauma. Andrea was subject to abuse early in her life from the adults around her. She negotiated it by accommodation, understanding that those who made demands of her required unconditional tenderness. She never recognised that she should say ‘no’; that no person can be all things to everyone. Her response to being touched is to surrender herself. It is a defence mechanism, a habit, one that promises chaos.

We first see Andrea through a window. She is dancing around the garden in the rain, ecstatic, free. I say ‘free’, but she is framed like a fish in a fish tank, behind glass. Through the course of the drama, Petkova doesn’t explore Andrea’s barriers to self-awareness, what prevents her from pulling back. Instead she shows Andrea’s impact on the already-damaged family that she has joined, the mother having died suddenly in her sleep from a heart condition. When told that the mother peacefully, Andrea doesn’t sympathise but instead reflects that it was a good way to die; she would like to die like that. Andrea’s reflex is to deny the existence of pain.

Undoubtedly, Andrea lives in the moment. She is perfectly suited to teaching a small class of children with Down’s Syndrome. When we first see her at work, she is imitating an animal, encouraging the children to guess. Then she allows the children to imitate animals themselves: a mosquito, an elephant, a crocodile and, yes, a fish swimming upside down, opening and closing its oval-shaped mouth.

Pictured: 'Floorboards? I can get used to this.' Andrea (Nina Schwabe) in a scene from the German film, 'A Fish Swimmng Upside Down', written and directed by Eliza Petkova. Still courtesy of Deutsche Film- und Fernsehakademie Berlin (DFFB)

When we first meet Philipp (Henning Köber), he is taking down a picture of his late wife (also significantly first seen behind glass). Martin interrupts him. ‘You never really cared,’ he complains. Father and son don’t talk to each other much; it is implied that Martin thinks that his father hasn’t grieved enough. Martin doesn’t engage with Andrea, whether she is flipping pancakes – he initially refuses to answer her question, ‘where’s the cinnamon’ – or mentioning that she doesn’t read books, only women’s magazines with horoscopes and make-up tips. ‘You’re an Aries,’ he tells Martin and proceeds to recite his horoscope, which is complimentary. ‘You find that amusing,’ she adds. ‘But you wouldn’t tell me if you do.’ There is a recognition in this scene that Andrea understands him; Martin understands this. He is entirely resistant to her until she helps him fix his bicycle tyre, applying two (not one) tyre levers a few inches apart at the same time. Shortly afterwards, he kisses her. She responds and a menage à trois begins.

Philipp is a slightly arrogant businessman who travels a lot. He explains that he speaks to groups of stupid men who initially don’t agree to his offer but who eventually accept it. He doesn’t like to be interrupted when working from home; Andrea straddles him and showers him with kisses, but he shrugs her off. He isn’t averse to sex before flying; Andrea obliges.

Aside from applying hand cream and dancing in the rain, Andrea rarely does something for herself alone, asking only for a ‘stone’ as a present. At one point, we see her reading a book. She allows it to fall on her face, then rolls off the sofa and starts crawling. Admittedly, this scene plays like an acting exercise. In another early scene, Andrea walks through the ground floor of the house, through the lounge into a separate dining room and helps herself to a piece of fruit. This too seems actorly – the scene otherwise has no function. At various moments, we see Andrea with fruit in her mouth (apple, strawberry, watermelon), consuming it in an almost sensuous manner - although that interpretation is down to the viewer.

There are two other characters in the mix. Nadya (Anna Manolova, who had previously worked with Petkova on her debut feature, Zhaleika) is a young cleaner, who has worked with the family for years. Jens (Martón Nagy, another previous collaborator, having appeared in Zhaleika and Petkova’s shorts, Abwesend and Umbilical Cord) is Martin’s somewhat jealous best friend. ‘If I lived in this house,’ he tells Martin, ‘I would sleep in the garden all the time.’ You want Martin to ask: ‘even in the rain?’ but he doesn’t go there.

Andrea is surprised to meet Nadya for the first time, doing the dishes. Her instinct is to help, though Nadya doesn’t want to be seen to not do her job. Andrea leaves her to her work but invites at the end of her shift her to sit down to enjoy some strawberries; Nadya does so. When talking to Martin, on whom she appears to have a crush, Nadya describes Andrea as odd. ‘She made me watch her eat,’ she complains. Jens pays Andrea little regard until she jumps into the pool (shortly after his garden monologue). It appears as if she is contributing to an idyll.

The kiss between Andrea and Martin changes everything. Martin joins her for morning runs, including over a motorway bridge where Andrea stops and spits on the traffic below, inviting Martin to do the same. They kiss and have sex a lot. At one point, by the pool, lips locked, Nadya sees them. Andrea notices and indicates this to Martin. Martin and Nadya then have a short talk, during which Nadya remarks that she has seen nothing. The inference is clear: Nadya can keep a secret.

Does a sword unsheathed in Act One get used by Act Five? As part of his exercise regime, Philipp puts on a kimono and pulls out a samurai sword. This is somewhat unusual, but one imagines it was given to him as a gift during one of his business transactions. Philipp takes out his sword towards the end of the film, but not to fall on it or do some emergency gardening. It is the only ‘false indicator’ in the film.

I say it is the only ‘false indicator’, but there is the small matter of the family drone. In Ladj Ly’s film, Les Miserables, the camera attached to a drone captures footage of police brutality; the drone is integral to the plot. Here it is less so. However, it represents the danger of Martin and Andrea getting caught. There are owls too in the vicinity. Prior to the climax, the only moment when Andrea expresses some emotion is when she is out driving and discovers a dead owl on the road. A tear rolls down her face. 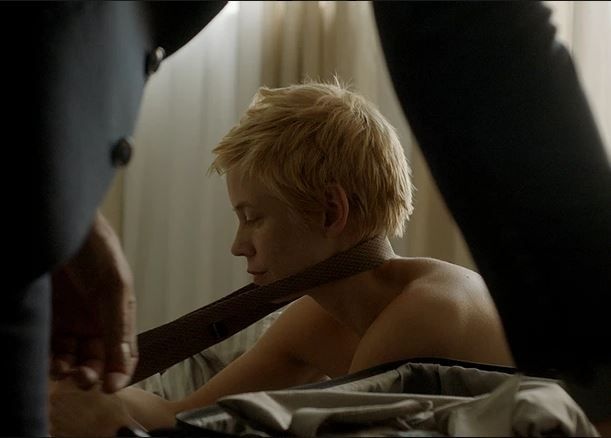 Pictured: Andrea (Nina Schwabe) plays with her lover's tie in a scene from the German film, 'A Fish Swimming Upside Down', written and directed by Eliza Petkova. Still courtesy of Deutsche Film- und Fernsehakademie Berlin (DFFB)

Martin gets Nadya fired by alleging that he found his camera in her bag. Admittedly, Nadya does lie on a bed and try on a pair of high heeled shoes, but this is hardly larceny. Martin becomes increasingly frustrated. ‘I love you,’ he tells Andrea. ‘So do I,’ says Andrea. Martin dares her to prove it, but Andrea doesn’t want to break up the family, preferring instead to maintain the twisted status quo. Going for a swim together, Martin challenges his father to a game of ‘see who can hold their breath underwater the longest’. Philipp goes first. Martin holds his head down until Philipp throws him off, gasping for air. (Oedipus complex, anyone?)

Things come to a head when Jens joins Philipp, Andrea and Martin for a vacation in a log cabin. Andrea, who previously found Philipp whilst blindfolded in the bedroom (in an earlier scene) participates in a game of hide-and-seek where Martin is the finder. He locates Jens easily enough but fails to find Andrea and Philipp clinging to one another in a cave. In another scene, he and Philipp are out walking. They lose sight of Andrea and Jens, who take a shortcut and end up back at the log cabin for a game of chess. Martin returns to the cabin frustrated. He asks Jens what he and Andrea did together. ‘Andrea sunbathed naked then she and I had sex. It was great.’ Jens ends up with a black eye. The trip ends early.

It becomes clear that Andrea has no intention of choosing between Philipp and Martin, even when she and Martin have a bath together. Martin makes the decision for her (over an autobahn) and the family is once again grief stricken.

There is a coda. Nadya returns to reveal the truth and is re-hired. There is a moment of tenderness. Petkova follows this with a montage of empty rooms in a house; a house that can tell a story.

Petkova may have taken as her inspiration Moliere’s 1664 play, Tartuffe, about a stranger who seduces everyone in the house or Jean Renoir’s 1931 film, Boudu Saved from Drowning, about a tramp who ingratiates himself in a bourgeois household. She is also interested in the way in which a special needs teacher can use games to reach people who have difficulty communicating their feelings. We see Andrea encouraging her class to keep balloons in the air; not everyone joins in but the children who do so are delighted. Much later, Martin joins her class; she encourages the children to make a Play-Doh model of him. When they leave, a girl asks Andrea and Martin to hold hands and walk away together. They oblige (fortunately there are no teachers around) and the girl dances a delightful jig.

There is only one way the film can end – and it is not well. However, it is wrong to think of Andrea as a perpetrator; she is exploited.

Martin does try to enjoy himself with young people his own age and has at least one female admirer. He returns home very drunk, takes a swig at the breakfast table and flops onto the sofa. Andrea pours water on his face, claiming it as an accident. Martin does not respond. However, at no point does he go to his mother’s grave or commune with her family (Oma or Großvater, Tante or Onkel). This is not to detract from the effectiveness of Petkova’s drama – her outsider eye piercing the idyll of the German moneyed family where ‘Vati kennt alles’. But it does suggest that grief counselling is a marathon not a sprint.