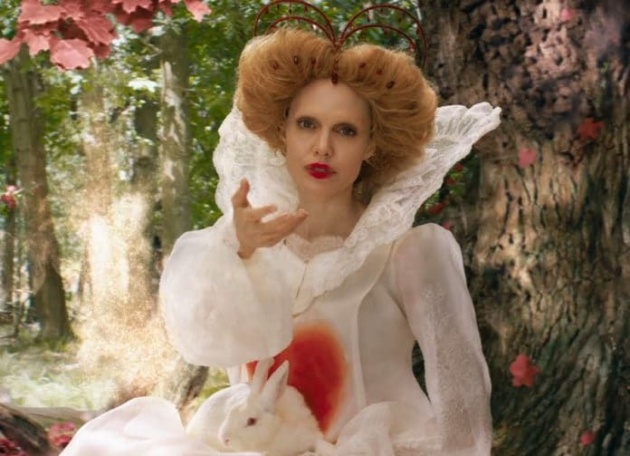 Pictured: 'Come to me, Council tenants. I offer you the Right to Buy.' Angelina Jolie channels the late British Prime Minister Margaret Thatcher in a scene from 'Come Away', a 'what if' children's film written by Marissa Kate Goodhill and directed by Brenda Chapman. Still courtesy of Signature Entertainment (UK)

In Come Away, writer Marissa Kate Goodhill and director Brenda Chapman take the combined plots of James Barrie’s Peter Pan and Lewis Carroll’s Alice in Wonderland and turn them into a hybrid cross between Arthur Ransome’s Swallows and Amazons and Charles Dickens’ Oliver Twist. It isn’t, as they say, pretty. Set at an unspecified time, either Victorian or Edwardian era England, it showers the narrative with motifs from Barrie’s and Carroll’s fiction without any of the charm. The idea might have worked if each iconic character had suddenly entered the other’s enchanted world (Peter in Wonderland, Alice in Neverland) and the two worlds were under threat owing to the displacement of the young protagonists but that is not the film that Goodhill and Chapman have made.

This is a film in which an entire family, the Littletons, embraces fantasy to a lesser or greater degree. Mama Rose (Angelina Jolie) makes hats so her children can dress up. Papa Jack (David Oyelowo) builds model replicas of famous sailing ships, such as the Golden Hind. They have three children, David (Reece Yates), Alice (Keira Chansa) and Peter (Jordan Nash). By day, the children run to the river and pretend to be pirates, using fallen branches as swords; the branches also double as arrows fired from imaginary bows. Peter is having trouble at primary school, struggling with mathematics - in the modern world, he might be diagnosed with dyscalculia. David meanwhile has been accepted for a place at a prestigious secondary-level school. His father wants to reward him with a special present, a pocket watch, just like the one given to him. When Jack goes to town, an acquaintance, Charlie (Michael Caine) remarks that he has been missed. But Jack has renounced his past life (‘you know I can’t go back’) for reasons that are not discussed.

The story is narrated by Alice as an adult (Gugu Mbatha-Raw), who says at one point, ‘I don’t know when Peter and I diverged’. I would hazard a guess – puberty. The film also has a recurring motif: children racing through long grass, the camera following behind them. This shot is repeated twice.

For a while, the film dawdles in Low Stakes Land; the biggest threat is that Rose’s sister, Eleanor (Anna Chancellor), who is without child, wishes to raise Alice as her own so she can grow up to become a lady and learn to cross her legs at the ankle. To this end, she invites Alice to join her for afternoon tea. The tray of cakes is more enticing than any pirate ship. (Well, to this writer, anyway.)

The tipping point – literally – involves a boat, left capsized at the edge of the river, which David promised his younger brother that he would help restore. He doesn’t do this; he does do Peter’s homework for him instead. David stands upon the boat heroically doing his imaginary stuff then falls into the water and drowns, his pocket watch sinking to the bottom of the riverbed. The family is in mourning. Jack, for reasons known only to the filmmakers, travels back to London to lose money at cards. Charlie is present at the game to deal him in.  Earlier Alice had constructed an entire card tower. ‘I am amazed you have them in the house,’ exclaims Eleanor, referring to the card deck and not the children. At any rate, it isn’t long before a brick is thrown through the Littleton’s window. Jack’s ‘IOU’ written on a handkerchief is wrapped around it.

It is at this point that the film gathers some dramatic momentum. Alice and Peter steal their father’s pocket watch (rather than retrieve David’s watch at the bottom of the river) and head for London, which resembles the set for Diagon Alley in the Harry Potter films. There they are bumped into by a young street gang of pilfering waifs who are being pursued by the police. As they collide, one of their young number drops a package, which Alice retrieves. The two Littleton children are misidentified as members of the gang and start running. A street chase ensues, ending an alley where they are re-united with the street gang. ‘You made us drop our loot,’ one of them complains. ‘What? You mean this?’ asks Alice holding aloft the modest bundle. 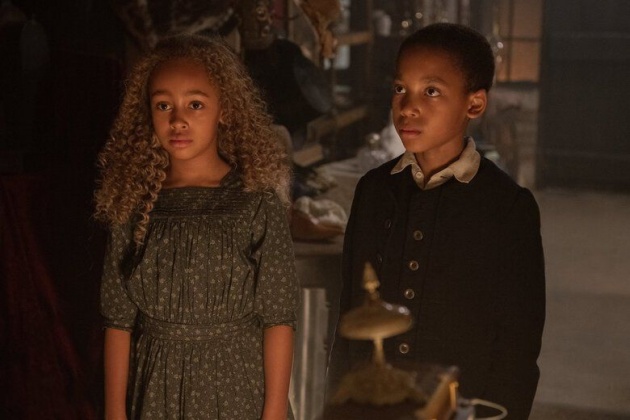 Pictured: Alice (Keira Chansa) and Peter (Jordan Nash) enter a pawn shop in a scene from the film 'Come Away', written by Marissa Kate Goodhill and directed by Brenda Chapman. Still courtesy of Signature Entertainment (UK)

In return, Alice and Peter ask for directions to the nearest pawn shop and there is only one, staffed by an eccentric gentleman (Clarke Peters), who is a prototypical Mad Hatter figure. He poses a riddle: ‘what do a raven and a writing desk have in common?’ Alice considers this. ‘I don’t know,’ she concludes. ‘I don’t know either,’ says the gentleman, ‘That’s why I was asking you.’ The gentleman, noted for his tall, leaning hat, looks at what they have brought. The inscription seems familiar. He has an associate, James (David Gyasi), who is sullen and menacing. It won’t surprise you to learn that together they are Peter and Alice’s grandfather and uncle. Moreover, James is the loan shark to whom Jack owes money; he has a very disparaging view of his brother. They take the pocket watch and exchange it for coins, which Peter imagines as enough to pay off the gambling debt. I’m not sure why James didn’t just take the watch and then remark that it barely covers the debt, but Goodhill and Chapman have running time to fill.

Alice and Peter return home by horse-drawn carriage - isn’t it harder to get a lift back to their country abode than it is to catch a ride to London? Peter shows his parents his latest school report. He is doing much better at mathematics. Perhaps now he can take David’s place at the new school. Alice meanwhile catches her still grieving mother drinking from a bottle of alcohol. She commands her daughter never to drink from it. Apparently, it has some medicinal purpose – well, they all say that. Later on, Alice sneaks into her mother’s dressing room and samples the liquid. She then shrinks – at least in her imagination – like the fantasy Alice on Lewis Carroll’s story. How she is restored to full size isn’t explained. Instead, we wonder why the young girl doesn’t cough and spit it out, which is surely the conventional response, or indeed have a hangover.

Jack has one chance to settle his debt without recourse to his children’s hidden loot – Peter secretes it away after their return instead of handing the bag of coins straight to his parents. He travels to London to present the finished model of the Golden Hind to the gentleman, Mr Brown (Derek Jacobi) who commissioned it. Mr Brown is pleased with the work, but it was required as a present one week ago. Not hearing from Jack and sensing the model would not arrive on time – how he knows this is beyond my conjecture – he instead commissioned another model, delivered on time. Jack would surely have known about the deadline, but never mind. He returns home and starts smashing his models. Peter tries to stop him.

In the film’s rushed, confusing finale, Peter and Alice discover that the coins given to them by James aren’t the glinting doubloons of their fevered imagination but worthless tokens – the sort you might get at a fairground. Jack visits his brother and returns with his hand broken beyond recovery, unable to work. A group of waifs appear from out of the tree – actually, they are members of the street gang whom Peter and Alice encountered earlier - and they engage in a battle with James and his associates who turn up at the family home. In one location, there is a stuffed crocodile mounted on the wall; this somehow results in the loss of James’s hand, so that he becomes Captain Hook. Peter and Alice have somehow retrieved the pocket watch given to David and this somehow restores order. Instead of going to a new school, Peter runs off to join the street gang. Chapman and Goodhill return to their narrator, who is married to Mr Darling and addresses her children, Michael, John and Wendy. 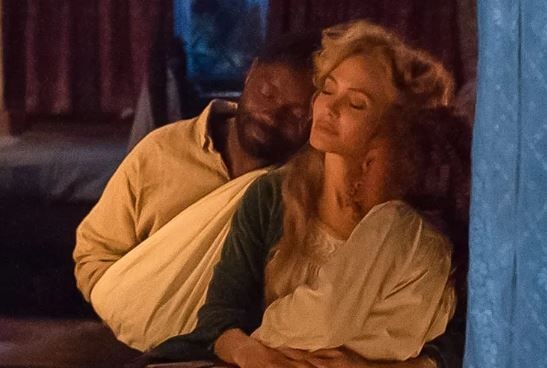 The mixed-race casting - the Littleton family is headed by a black father and a white mother - simply serves to underline a stereotype. Peter does badly at school, his brief improvement attributed to his brother’s assistance, and so joins a street gang. Alice, meanwhile, becomes integrated by marrying a white Englishman. The film might seem progressive by positing mixed-race Peter and Alice but instead proposes an ‘acceptable’ social norm that does not give its black characters the chance to achieve success on their own terms. Peter has now become a problem, while Alice is taught not to feel good about her race, marrying a white man. Rose is an ambiguous figure, at one point appearing as Lewis Carroll’s ‘White Queen’ in Alice’s fevered imagination; in this scene, Jolie resembles the late British Prime Minister Margaret Thatcher. Jack, meanwhile, is categorised by a lower social class, skilled with his hands but not educated like his wife. Although he occasionally drops the letter ‘h’, Oyelowo doesn’t play him as such. The script doesn’t allow him to tell his story – how he came to the attention of Rose - which, after all, might be more interesting than any other story told in the film.

Fundamentally, the film is designed for an adult audience rather than a family one, relying heavily on their knowledge of Peter Pan and Alice in Wonderland. Stories generally take readers into their own world but for a younger audience, the film refers to but never fully involves them in three worlds, the Victorian/Edwardian reality, Wonderland and Neverland. Goodhill has described her script as a prequel; how Peter and Alice came to imagine Neverland and Wonderland. However, viewers should complain that these characters didn’t ‘imagine’ these worlds at all.

The other thing Goodhill has done is wrested the characters from their true creators, Barrie and Carroll, without doing anything with them. The makers have also forgotten the lesson of the 1985 film Dream Child, written by Dennis Potter and directed by Gavin Millar, which explored the relationship between eight-year-old Alice Hargreaves and the Rev. Charles Dodgson, who published under the name Lewis Carroll, the former inspiring the latter. Millar’s film played only to adults, young children being not especially concerned with literary creation.

Chapman has made a courageous transition from animation - she co-directed the 2012 Pixar Animation film, Brave. But her choice of material is awry. Ultimately there is little in the film to inspire or delight, accounting for its long-delayed release. 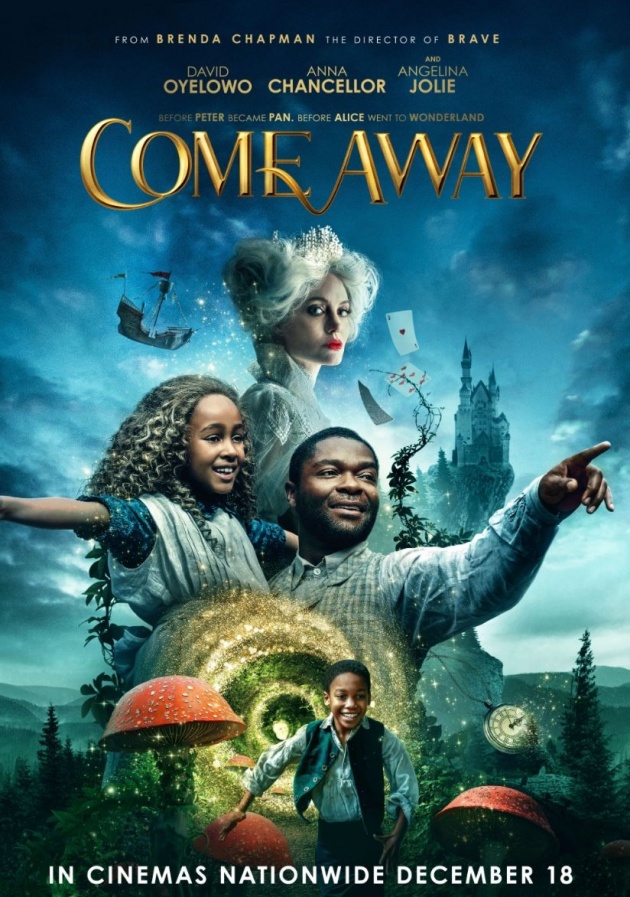