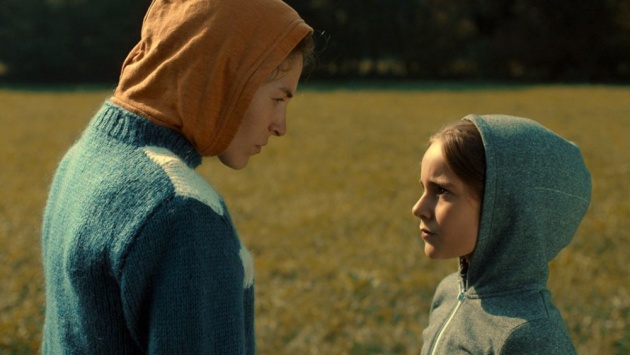 We see an open field. A young girl and a young woman run towards each other and collide intentionally. What is going on?

For a long time in Swiss-Peruvian filmmaker Klaudia Reynicke’s film, Love Me Tender, that is the last we see of the outside world. The main character, Seconda (Barbara Giordano) is an agoraphobic. She lounges around in the family apartment in her underwear practising dance routines. She appears to be expecting a phone call or at least is excited when the telephone rings, but then her father (Maurizio Tabani) unplugs it. (There are no mobile phones in Seconda’s household.) Seconda hisses at the white-haired cat, Milou, whom she perceives as a competitor for attention – they are both home bodies. It appears to us that Seconda has been traumatised by her sister’s death but, as we discover, this is a girl she did not know. Her sister, she explains later, was crushed by a car. Seconda is the second child and this time her parents are going to protect her. But that means not allowing her to socialise. How Seconda could live like this is not explained, but it becomes apparent that we shouldn’t take the story literally. Two events are certain: Seconda’s mother (Anna Galante) dies suddenly then her father abandons the family. Seconda starts receiving phone calls from Henri (Gilles Privat), to whom her father owes money. These become increasingly abusive until they stop abruptly.

Reynicke’s second feature takes its title from an Elvis Presley song, but Elvis has not so much left the building but was never there to begin with. For a while Seconda divides her time between eating what’s left in the house – she has drawn faces on egg boxes – feeding the goldfish until it dies and falling over the cat, as she discovers a storeroom with four tins of stewed tomatoes on a shelf. She consumes the tinned tomatoes ravenously, then vomits. Seconda records a welcome message on the family answerphone asking for her father to return but all she receives in return are messages from Henri insisting that she repay the debt. No social services come to call. Instead Seconda starts throwing stones out of the window at passers-by - I think she flings pebbles found at the bottom of the fish tank. Her targets include a young couple and a group of uniformed school children.

In an early scene, Seconda expresses an intention to go out. We see her put on a blue jumpsuit over her underwear, a cross between a onesie and training attire. Then she changes her mind after her father stops her answering the phone.

At a certain point, having eaten the cat’s biscuits – we earlier saw a mountain of them in the cat’s bowl – Seconda attempts suicide, first by immersing her head in water while having a bath and cutting her wrist, then by aiming an arrow at herself. Releasing the bow, she kills Milou instead. She then wraps the cat up and throws it out of the window. 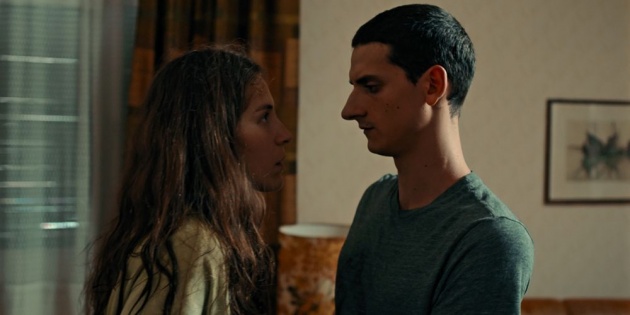 Pictured: 'Kill me and you can have this house.' Seconda (Barbara Giordano) makes Santo (Antonio Bannò) an offer he ought to refuse in the film, 'Love Me Tender', written and directed by Klaudia Reynicke. Still courtesy of First Hand Films GmbH / Arte Kino

Seconda’s world changes when she opens the door to Santo (Antonio Bannò), a young man who rings the doorbell. She pulls him inside, gives him a glass of water, and asks him to kill her. ’I have a strong survival instinct,’ she explains. In exchange, he would get the house (like that would happen). Santo had only come for bottles – he collects empties which he then sells – but agrees to help. Seconda waits for him to return. Henri calls round, ostensibly to collect the family debt. He is impressed by her beauty and asks her to go for a drink with him. She doesn’t need a drink, you think, rather a square meal. Seconda refuses.

At one point, her window is broken. A young girl (Federica Vermiglio) has thrown a stone and waits for Seconda to see her. ‘You can’t go out,’ she says, taunting Seconda with the impunity of childhood. Seconda is unable to chase her. Nevertheless, she finds coins and steals the courage to go out.

There is an episode where she goes to a supermarket in order to buy eggs. There is a couple in the store who are laughing. Seconda doesn’t respond initially until she hears that they are laughing at her, specifically in the way that she dresses in the blue hooded onesie – leaving her house, she certainly turned heads. Seconda’s response is to bite the woman and run ahead of the couple. Then she hides in a tree and hurls eggs at the couple. The man begs her to stop.

Seconda’s mission is to find Santo. She briefly sees the young girl with a cat, much like Milou, crouched down by a wall. She is recognised by some locals who tell her where Santo lives. She enters his apartment and surprises him while he is having a shower. Reacting in shock he bangs his head and is rendered unconscious.

We next see Seconda behind the wheel of a delivery bike. Santo has been bundled into the front compartment. She drags Santo out, carries him into her house, up the stairs and finally lays him out on her bed. She talks to him, but he does not respond. He may be in a coma. Finally, she gets into bed with him. They lie together side by side. When she awakens the next morning, Santo has disappeared.

The front door has been left open, allowing Henri to return with a bunch of flowers. While Seconda searches for Santo, Henri makes his way up the stairs and into the apartment. A cupboard door suddenly opens, and Henri is struck. Santo’s attempt to make good on his obligation to kill Seconda has gone awry.

Barefoot and in a dressing gown, Santo escapes with the similarly attired Seconda. She drives Henri’s car erratically, intending to get treatment for Henri. ‘Is this the way to the hospital?’ she asks. Santo considers her mad, eventually compelling her to stop the car and dragging her from the driver’s seat. By this time, Henri has woken up in the boot of the car, delivers a foul-mouthed tirade then stops speaking almost as suddenly as he began. Seconda and Santo put some distance between themselves and the car. They have sex, then Santo reveals that he had heard some of what Seconda had told him, how she hid for two weeks in a chicken shed after becoming obsessed with a boy. Seconda and Santo fall asleep together. We see Henri having escaped from the boot of his car – how did he get out? When Seconda wakes up, Santo has gone. She wanders in search of him, briefly seeing the young girl in a chicken coop. She runs into a dried out swimming pool, slamming her head against the wall of the deep end. This is the film’s only shocking moment.

When we next see her, Seconda is in an institution. Her father visits, insisting that the debts have been cleared and she can move back to the house, which is hers. He explains how after her sister had died, he and Seconda’s mother decided not to make the same mistake. Seconda expresses her anger.

As she visits the bathroom, another patient taunts her, aware of her agoraphobia. The two women are separated. Whilst Seconda plays a game of dominos, the rough-looking patient takes her piece. They then have a dance-off, the room suddenly being lit like a disco. The other patients also dance. Seconda’s moves intimidate her tormentor. At the end, the nursing staff ask if they want to play some music. 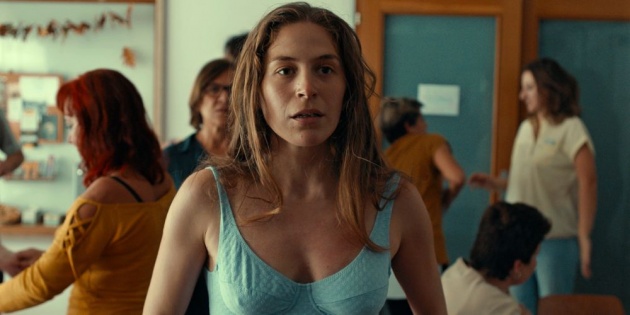 Pictured: Seconda (Barbara Giordano) gets the whole room moving in a scene from the film, 'Love Me Tender', written and directed by Klaudia Reynicke. Still courtesy of First Hand Films GmbH / Arte Kino

In the final scene, we return to the opening image. Seconda is facing the young girl, whom we now understand is her younger self. They run towards each other and collide. It is a metaphor; Seconda attempting to come to terms with her younger self or, more accurately, to cast off the shackles of her upbringing.

Running at brisk 79 minutes, Reynicke’s film tackles the difficult subject of growing up in an over-protected manner. The film is lifted by Barbara Giordano’s credible and intense performance. I completely believed in her, even during the film’s more fantastical scenes, notably a dream sequence where Seconda wanders into a room crowded by her own family; it is as if she walked in on a scene from her childhood.

Ultimately, this is another female-directed film focussing on mental health – the alternative to romance. Reynicke doesn’t find a cure for Seconda’s condition, her inability to socialise and fit in with the world. Seconda does however recognise what the problem is, which is halfway towards adjusting. Playing dominos is also a sign of increased socialisation. The dance-off truly validates her. She has a talent. All she needs now is a way to use it in a more socialised way, should she choose to do so.

Reviewed on Thursday 31 December 2020, streamed through the Artekino website