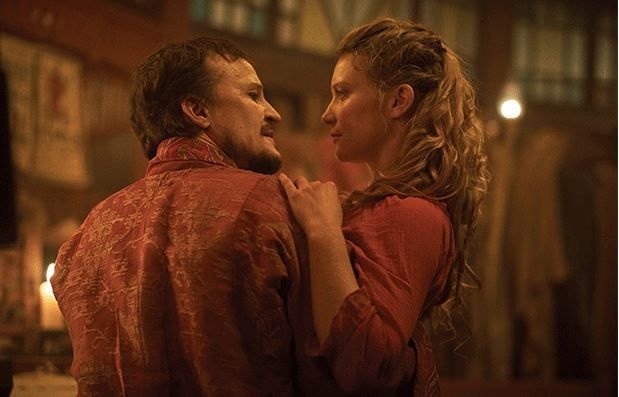 If you caught a glimpse of him as Charles Manson in Quentin Tarantino’s Once Upon A Time … in Hollywood, you might have asked, ‘who is Damon Herriman?’ If you see him in co-writer-director Mirrah Foulkes’ Judy and Punch, you might then ask, ‘why didn’t Tarantino put him to good use?’ Foulkes’ film is a ‘Punch and Judy’ show origins movie, an unlikely premise for a film, but one for the most part not requiring wire work (unlike other origins flicks).

Actress turned director Foulkes imagines Punch and Judy as real people, a husband and wife pair of puppeteers, played by Herriman and Mia Wasikowska respectively, who tour with a show that celebrates domestic violence. The puppeteering is skilfully done, but Judy questions the content. ‘Don’t you think that the show is a bit punchy and a bit smashy?’ ‘It’s what the audience wants,’ replies the self-styled Professor Punch.

The location, the land-locked town of Seaside, nowhere near the sea, is specific. The time period is not. The drama takes place in an 16th Century-style fairy tale England. We recognise the tropes. There is the persecution of heretics, a religious man stands on a box and exhorts a non-existent audience. There are prostitutes and a popular theatre. Professor Punch himself desperately hopes that the critics will show up and offer to appear in London will materialise.

Herriman makes the best of a terrific part. His Professor Punch is a vain-glorious, showboating attention seeker, hyping himself beyond his ability to deliver. He augments his moustache with fishhook-like curls and makes an entrance in a flash of smoke, before disappearing to a galley at the top of the stage to use his puppet alter-ego to take on the world. His Punch brutalises his wife and even battles the Devil. Punch can only express himself through violence and the wielding of a long stick. Little surprise then that, when it comes to ‘Stoning Day’, when heretics are punished, he is asked to throw the first rock.

On stage, the puppet Punch takes on all-comers. Off it, Professor Punch only strikes women. In the world of the movie, the brutalisation of women is institutionalised as a means for the men to deflect attention away from their own faults.

Professor Punch’s weaknesses are his appetites: women, drink and sausages. Polly (Lucy Velik with a cockney accent) is a single mother who tempts him with her unfettered admiration - she compliments him on his arms. Drink turns Punch into a show-off. Sausages prompt him to chase his servant’s dog with his (unnamed) baby son in his hand. When he trips over during the chase and throws the baby out of the window – a gasp-inducing moment that is the emotional highpoint of the film – he is forced to confess to his wife. She starts hitting him in a mixture of anger and grief but then Punch strikes back, beating Judy to a bloody pulp. The on-screen violence is sensitively handled. Judy is off-screen as Punch strikes her. We see blood on her wrist emanating from the wounds on her head as Punch bundles her body into a rug and buries her in the woods. 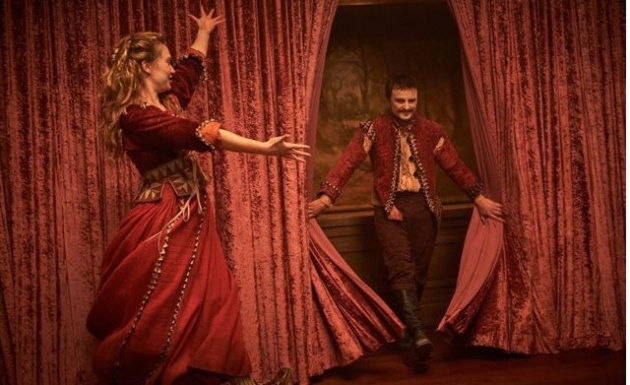 Punch then frames his elderly servant, Scaramouche (Terry Norris) and Scaramouche’s wife, Maude (Brenda Palmer) for murder, placing his child’s shoe in their fireplace. Part of Foulkes’ satire is that the police are more likely to accept them as suspects of having ‘eaten’ the child than the morally dubious entertainer Punch – a critique of celebrity culture in which famous people cannot possibly be guilty of wrongdoing; they work to make us happy.

Punch then sets about replacing Judy with Polly, only she is nowhere near as dexterous with puppets. ‘Everyone knows she was the talent behind the act,’ Polly tells him before he strikes her in the face.

A confession is extracted from the elderly couple, who are sentenced to be hung. ‘We’re due a hanging,’ an old man explains, ‘and I suppose they’ve got to mix it up a bit’.

The humour is very droll. At one point, Punch delivers a speech made famous by Russell Crowe in Gladiator – ‘husband to a murdered wife, father to a murdered son and I will have my revenge in this life or the next’. Then there’s Punch’s alternative puppet show (attended by two critics) in which Polly’s two children are marionette substitutes and end up scrapping with each other. The off-stage chaos that follows is captured in a single take.

Where the film is confused is in conflating misogyny with othering – the demonization of strangers who have different ideas. At the opening, Scotty (Daisy Axon), a girl disguised as a boy, makes her way to the theatre, wending her way past the aforementioned preacher and a group of prostitutes before arriving to watch the Punch and Judy show, with Judy collecting donations: ‘no coin too large, no penny too small’. Scotty is entranced. She belongs to a community of mostly women living in exile, hiding behind a curtain and consisting of those, including medicine woman Dr Goodtime (Gillian Jones) who might otherwise be stoned. The three women who are punished in an early scene are convicted respectively because of a sudden death of chickens, unknown marks on the back and staring at the moon for a suspiciously long period of time. The only escape is to become gypsies. ‘Wouldn’t be great to have somewhere to live, permanently?’ asks one.

The script scrupulously resolves all its elements in its finale, which not only references Gladiator but also Assassin's Creed. Yet the film doesn’t equate female justice with an exact replication of male action. Punch is given a chance to repent, after being visited by a ‘Christmas Carol’ style spectre. He almost does so until a voice from the crowd spurs him back to his bad habits.

The final scene of the film shows a version of the Punch and Judy show that we know today, watched by a slowly gathering group of passing children. Far more powerful is the credit sequence, set to black and white footage of an audience of young children who are terrified watching a Punch and Judy show. It resembles a social experiment of the 1960s gone awry.

Foulkes collaborated on the screenplay with Tom and Judy Punch and Eddy Moretti and is careful to include all the Punch and Judy tropes, including a crocodile that one character confronts in a dream sequence. Benedict Hardie deserves special mention as the modernist police constable side-lined by the community who gets very excited about having something to do – he rushes back to fetch his hat. The film’s mixture of conflated fairy-tale period detail and modern-day anachronisms, including up-tempo Classical Rock music (of a type popular in the 1980s) over the opening puppet show gives some sequences an extra zip – the Heath Ledger jousting adventure, A Knight’s Tale may be an inspiration. The contemporary references alleviate the didacticism of the climax. Foulkes has a sense of humour; she isn’t trying to correct social injustice in a po-faced way.