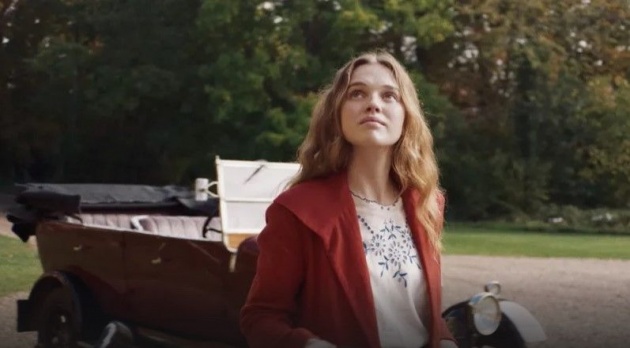 Husson and Birch employ a tricky flashback structure that gives actress turned Parliamentarian Glenda Jackson (as the older Jane Fairchild) her first big-screen role since 1990 – she took a hiatus from acting in 1992 to become an MP, retiring from Parliament in 2015. Jackson, in the film’s closing minutes, takes the film somewhere else. ‘I’ve won all the awards,’ she says to a throng of reporters at her front door. You look at Jackson and think, ‘yes, you have’. Jackson is a fiery presence capable of taking a film hostage, yet she also performs the same function in this film as Vanessa Redgrave does in Joe Wright’s film adaptation of Ian McEwan’s novel, Atonement of the older woman looking back.

The key action takes place on 30th March 1924, Mother’s Day, a day of aching sadness for Mr and Mrs Niven (Colin Firth and OIivia Colman), whose son like so many others died in battle during World War One. The First World War figures as strongly in this film as the Second World War did in Atonement, only the war against Germany between 1914-18 was (arguably) a needless indulgence that resulted in the rise of National Socialism and the Holocaust. Back in the 1924 of Graham Swift’s imagination, the landed gentry are keeping up appearances, or at least the men are. The women teeter on the verge of rage – a set of volcanos in wide-brimmed hats, scarcely reaching for their lace handkerchiefs. Their tears should not be ignored.

Jane, who works for the Nivens, is given the day off along her colleague Milly (Patsy Ferran). They cycle together to the station, Jane seeing Milly to the platform where she imagines a sea of domestic servants in their uniforms boarding the train. The film dips in and out of that day, sometimes backwards in time, showing Jane meeting her future lover, Paul Sheringham (Josh O’Connor) for the first time, sometimes forward to her relationship with philosophy student Donald (Ṣọpẹ́ Dìrísù) and forward still to the older Jane in her writing room some time in the late 1990s. The fracturing of the narrative, further broken up by single words – occasionally a sentence - written on a page keeps the viewer on their toes. It is also a means by which Husson and Birch (following Swift’s lead) delay the consequence of Jane’s action.

Husson and Birch has not been completely faithful to the novel. In the book, Paul gives Jane sixpence each time they meet. In the film, it is Mr Niven who gives Jane a coin, which Paul discovers whilst disrobing her. Giving Jane money after sex devalues her. It signifies paying for a service rather than sharing a moment. Even though Jane is not Paul’s social equal, she is such in the bedroom. Husson and Birch treat Paul and Jane as lovers across the social divide.

Paul is also his parents’ last surviving son. In the novel, he had four brothers, in the film two. In the film’s opening moments, Paul (introduced by his mouth and chin) speaks about the racehorse that his family used to own. Each sibling had a leg. ‘But who had the fourth leg?’ asks Jane. The answer is contrived.

The racehorse is a metaphor for the Sheringham family in its prime – noble, graceful, healthy, and strong. Now it is lame. At the start of the day, Paul telephones Jane – Jane pretends it is a wrong number and refers to Paul as ‘Madam’. On her day off, she has been summoned by Paul to enter through the rear door. Paul is nominally studying to be a lawyer. In Jane’s company, he asserts he is studying her. While Jane admires the family’s paintings, Paul summons her to his bedroom. He undresses her carefully, shoes and socks first, looking up at her with knowing anticipation. O’Connor plays Paul without a hint of contrivance and with a charming smile. For him, sex is something they both want. Jane doesn’t disagree.

Husson cuts straight to the post-coital moment – a lot of cigarettes are smoked in the film, mostly by Paul. Then she shows a brief moment of orgasm. There are flashbacks to earlier intimate exchanges, Jane noting a semen stain on a white sheet – she also stares at a stain on a curtain that reminds her of semen. (Or is it the same sheet having been laundered?) Paul dallies but eventually dresses himself, v-necked vest first. Jane insists that he is dressing the wrong way – it should be trousers first. She has a point. Stray semen could end up on his shirt.

During their spell in bed, Jane imagines the couple being surprised. First the bicycle would be spotted. Then they would be discovered in the room. Paul shows no hint of anxiety, even though he has a prior engagement. The way Husson and Birch portray that engagement, it is an afterthought.

Jane certainly knows that Paul is familiar with the Nivens. He was a guest in their home whilst Jane was at service. She does not know that the Nivens are with Paul’s parents and his prospective in-laws, Giles and Sylvia Hobday (Simon Shepherd and Caroline Harker) and Paul’s fiancée, Emma Hobday (Emma D'Arcy), the latter becoming steadily more upset at the luncheon at which Paul does not arrive. ‘He’s always late,’ Emma screams.

Emma is not the only woman in the drama who utters a cry from the heart. From the very start, Mrs Niven is vexed, scarcely speaking to her husband. In the car, Mr Niven (Firth at his most repressed) becomes anxious about being late. ‘You know I don’t like it,’ he explains. ‘It’s just another bloody lunch,’ responds Mrs Niven, making her annoyance clear. 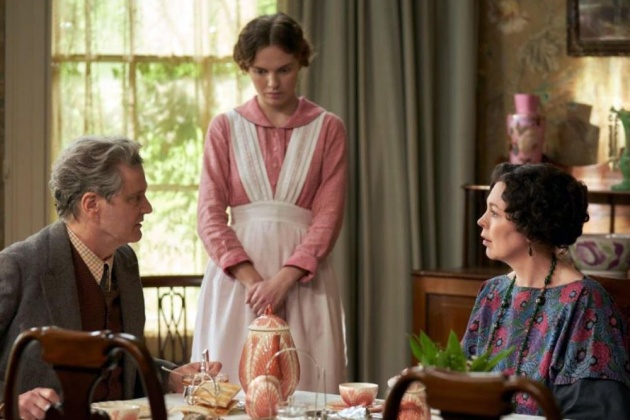 Pictured: A day off. Colin Firth, Odessa Young and Olivia Colman in a scene from the period British drama, 'Mothering Sunday', directed by Eva Husson. Still courtesy of Lionsgate/Number 9 Films

The loss – or absence – of children makes a mockery of Mothering Sunday. The mothers that were lament their loss. The Sheringhams are proud of their son’s devotion to his studies – ‘’Mugging up’, he calls it,’ says Mr Sheringham (Craig Crosbie).

In a deliberate echo of Paul and Jane’s relationship, a servant addresses Emma as she stares at the river, wondering if she might go ‘Ophelia’. ‘Are you supposed to talk to me like that,’ sneers Emma. ‘What? A servant is not supposed to know Shakespeare?’ he responds. The scene creaks but Emma is suitably annoyed enough to walk away.

The film is defined by long, apparently vacant stares, notably when we first see Jane, her face barely moving, before she applies herself to cleaning the window. The older Jane is similarly transfixed by a memory. It is also defined by Jane’s naked walk around the Sheringham’s house, before she alights on a copy of a book in the library. Had a man directed Mothering Sunday, the naked walk might have seemed gratuitous, or else the director might have preserved Jane’s modesty. Husson makes a different point. Naked and clean, Jane is indistinguishable from the family who own the house. It is only clothes that betray a person’s social standing. Nakedness also disrupts convention rather like opening one’s mouth whilst chewing or mentioning money in company. The downside of Jane’s naked walk is that the film reminds viewers of Tobe Hooper’s risible 1985 horror film, Lifeforce, in which Mathilda May wanders through the whole film naked. Viewers might also be reminded of Natasha Henstridge in the 1995 film, Species. Both actresses play alien creatures.

Jane can scarcely be described as a seductress. She develops a relationship with Donald after he walks into her shop, apparently looking for a gift for his mother and selecting some philosophy books for himself. ‘Can you read German?’ Jane asks. ‘Yes’, Donald replies. It is through their relationship that we discover that Jane is a writer. She has an agent called Maud and is expected to deliver a thriller. The scenes with Donald serve a single purpose – that around Jane, bad things happen to men. Donald falls over in a park whilst with her, symptomatic of a deeper problem. Jane is told that her life in servitude – observing people – set her up to be a writer. It is one thing to observe behaviour, quite another to make sense of it through stories. It is the desire to do the latter that makes a writer. In Swift’s novel, by the end of her career, Jane had written 19 novels. I could scarcely believe that the screen Jane had written one. 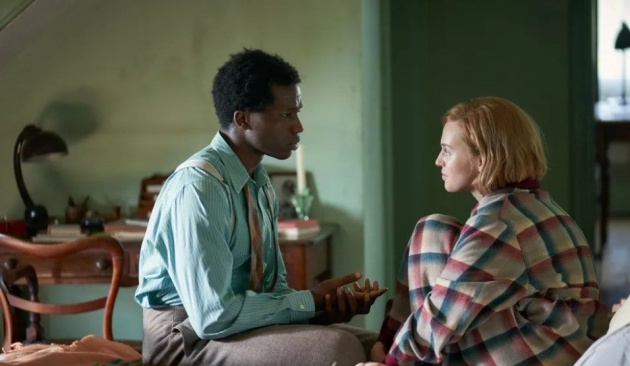 Jane only becomes aware that something terrible has happened when she gets back to the Nivens’ house. She accompanies Mr Niven to the Sheringhams, where he imparts some bad news to the maid. For her part, the maid ascribes Jane’s behaviour – being in bed, eating the pie – to Paul.

Had Jane not accepted Paul’s invitation to visit him, he might not had met his fate. In the film, Jane experiences grief but no sense of remorse, partly because she has no means through which she should express it and partly because she always knew Paul was pledged to someone else. (In the house, she picks up Paul and Emma’s wedding invitation. Some time after the event that changes Paul’s life, Jane announces to Mr Niven that she will leave his service as she has another offer, to take up a job in a bookshop.

In another scene that echoes Jane’s own undressing, Jane helps Mrs Niven change. Upon hearing that Jane was an orphan and never knew her family, Mrs Niven describes her as blessed, having experienced her grief early. This might seem like a clever line, but it imagines that Jane might never form other bonds and experience other losses. There is a question whether she can have children. In a flashback, after Jane had lost her virginity to Paul, he explains that he knows a doctor who can fit a cap, preventing (we imagine) her becoming pregnant. We ought to think Paul as a selfish bastard, but in the context of children lost through war, we don’t – or at least, Jane is not distressed by his request.

What might also mark Jane as a writer is that she has no one else to talk to. Writing – a solitary occupation – depends upon the imaginary reader. Jane speaks to Milly about sex but can hardly reveal her lover. When asked about what made her a writer, Jane specifies three things: being born, being given her first typewriter (symbolically with the ‘P’ missing, representing Paul) and a secret. ‘That’s a good answer,’ says Paul, for what else could he say?

The lack of guilt makes it hard for us to feel for Jane. We feel separated from her emotional state. This could be the point. Maybe we are kidding ourselves when we say we empathise with others. Our egos keep us selfish. Perhaps Husson is saying that relationships without children are hollow and loveless, with art being a poor substitute. At any rate, judging by the reviews and poor box office, Mothering Sunday has left much of its audience indifferent.