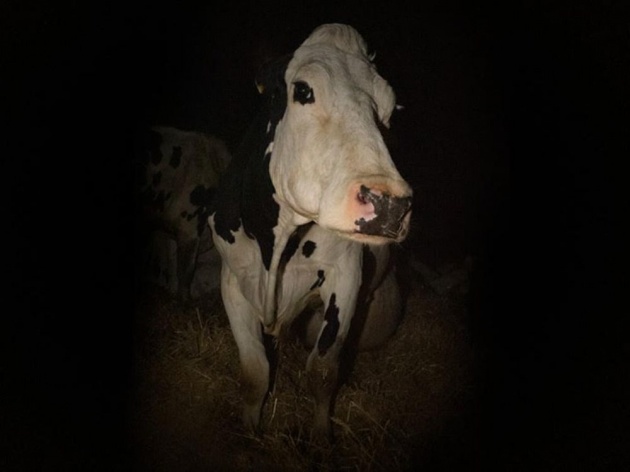 Pictured: Luma aka 1129, the star of British director Andrea Arnold's documentary, 'Cow', a portrait of the life of a dairy cow in Southern England. Still courtesy of Mubi (UK)

When I was growing up, ‘creature features’ were films about human-animal hybrids that, after awkward introductions, terrorised communities and were generally misunderstood. The Wolf Man, The Fly and, of course, Creature from the Black Lagoon are three such examples. In the documentary form, the term means something different. Viktor Kossakovsky’s ground-breaking film, Gunda, focussed on a mother pig that had just given birth; the supporting cast included a one-legged chicken. In British director Andrea Arnold’s documentary, Cow, the spotlight is on a Kent dairy cow branded with the number 1129, whom we later hear is called Luma.

Arnold, who has an impressive track record in British dramas – Red Road, Fish Tank, Wuthering Heights – had a mixed experience in the United States in the 2010s. On the plus side, she wrote and directed American Honey, about a girl, Star (Sasha Lane) who runs away from her negligent mom and joins a group of travelling magazine subscription sellers led by Jake (Shia LaBeouf) and Krystal (Riley Keough). On the minus side, after helming episodes of Transparent and I Love Dick, she directed the whole of series two of Big Little Lies, only to have it taken away from her in post-production. She isn’t bitter. ‘They gave me a lot of freedom… I enjoyed doing it,’ she reflected in a recent interview.  Cow represents her return to Southern England; Arnold grew up in Dartford in Kent. This film crowns her Homecoming Dairy Queen.

Luma is only one of the stars of the film. The other is cinematographer Magda Kowalczyk, whose work, always close to a dairy cow at least 900 kg in weight, is nothing short of breath taking. At a couple of points, the camera operator runs alongside Luma. You only have to think of the folks who run with the bulls in Pamplona to appreciate how dangerous this is, though the operator is never in front of a bovine in motion, unlike those bull runners.

Cow is extremely visceral. The British Board of Film Classification warns us to expect ‘distressing scenes.’ The film delivers, beginning with a birth in which a calf is pulled from Luma’s rear. Although farm workers are shown on screen, Arnold shows little or no interest in them. Luma 1129 is always in the foreground, filling the frame, filmed from below, or else shown in an empty enclosure. On one occasion, when the camera pans to reveal a female farm worker, a young woman in a tightly fitting top, that is to say, not wearing protective clothing, the effect is startling. Arnold never holds a shot on a farm worker, cutting or panning away quickly. The cow is the thing.

As the calf is pulled out of Luma in the opening moments, its legs bound by ropes, we wonder (briefly) how cows deliver calves safely without human intervention.  Once the calf is on the ground, the rope binding its legs is cut, and its mother takes over, cleaning the calf’s face and body. We hear every lick, every slurp. The sound recording and mixing bring us close. In a subsequent scene, the calf stands and feeds from its mother.

Farmers aren’t interested in bovine parenting. If they were, the calf would not be separated from its mother as happens here. We wince as a tag, number 4481, is attached to its left ear. Its right ear is similarly punctured – we note the size of the black pin used to do this. 4481 undergoes a subsequent cranial procedure as holes are burnt into the top of its head. There is no voiceover to explain why this is done but it is known as disbudding: the removal of horn-producing cells. At the end, the marks have the hue of blue ink. The burn marks are said to hurt for weeks.

Once Luma is separated from her calf, she is put back to work, herded into a small metal enclosure and encouraged to stand on wooden blocks whilst suction pipes are attached to her teats. Luma is then drained of milk – a phrase that better describes the process than milking – until we assume she is dry. As the pipes are removed, there is a small discharge. But, as the saying goes, there’s no crying over spilt milk.

Even before their physical separation, the calf is discouraged from feeding from its mother. A bottle is placed in its mouth by a farm worker. Once again, we hear every slurp, every suck.  Later, we see the calf getting used to drawing milk from an artificial teat. Clamping its mouth around it from the side, 4481’s mouth slips out. Hunger motivates the calf to try again. The feeding process is clumsy, unnatural. We hear every slurp, every thud. 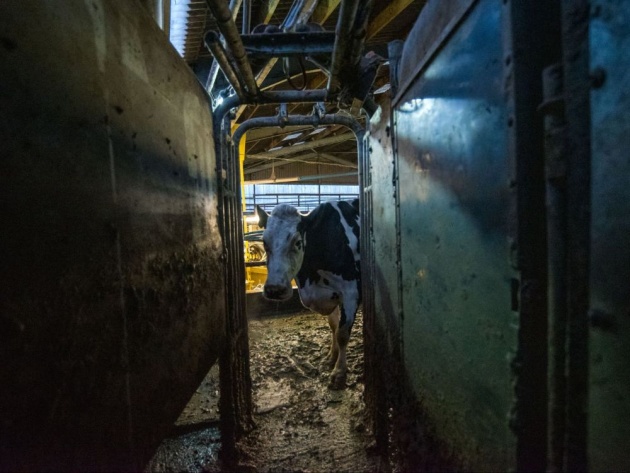 Luma herself feeds from a trough. Grain is poured into it for Luma and the other cows to ‘enjoy’, if that’s the word. Luma is herded into a similar enclosed space to feed so that she doesn’t have to fight for her food with the other cows. When Luma looks around, it is almost as if she is missing her calf, hoping that the calf is eating well. The film invites us to ascribe an emotional meaning to Luma’s movements. Not all of them are responses to physical stimuli.

Arnold alternates between Luma and her estranged calf before concentrating on Luma herself. For some of the film, we are introduced to Luma from behind, so we see the number burnt into her rump. We also note the weight of her milk sack, swaying just above the ground. Luma has wrinkles on her neck that suggest her advanced age. Occasionally, we feel her weight as she smashes against the camera, causing a shudder.

At one point, the calf is moved into a vehicle, and the camera accompanies her as she trots into the trailer. There are other calves that herded to join her. We see the calf watch them from inside the vehicle. Once the herding is complete, the trailer door is shut with the camera operator inside, staying with the calves as they are moved to a different location. We feel every bump and judder.

One of Arnold’s more innovative approaches is to treat extra-diegetic sound - that is music placed over a scene to convey a mood or act as commentary - as diegetic sound, that is, as if played in the barns and enclosures whilst the cows are forced to surrender their milk. Arnold may not be the first director to do this, but it seems new to me. The effect is that we strain to hear the lyrics; the music diffuse, competing with other farm noises, the tread of cows, stomping through mud, the mooing. For the most part, we hear female voices – the film includes a song by Billie Eilish. An exception is ‘Fairytale of New York’. As we listen to Shane MacGowan’s alcohol-impaired tones, a male farm worker wanders around wearing a Santa hat.

Only towards the end of the film do we discover how close the farm is to ‘civilisation’, that is, to houses and railway lines. We see, in the distance, a train zoom past in one direction, then, barely a moment later, a train passing in the other direction. Arnold is keen to maintain a ‘cow-eye’ view. We see fireworks explode in the distance. Human activity is made strange.

At certain moments, we stare at Luma’s eye, as if she is staring at us. What does our interest mean?

There is a moment where the camera tracks away and follows the length of a yellow-coated electrical cable, drawing our attention to a spider’s web spun underneath it. It is one of the few moments where Arnold is not showing us a cow’s life, but instead comments on the unloved space in which Luma lives.

The framing draws attention to the mud around Luma’s hooves. We see her trapped in a machine that raises her off the ground and at a 90-degree angle in order for her hooves to be cleaned – the cow equivalent to getting their nails done. By the end of the process, the hooves are coconut white and somewhat scratched. Luma moves her head in discomfort. The machine lowers her down slowly. It is as if Luma was trapped in the world’s worst fairground ride. (‘What? You mean it doesn’t go upside down?’)

There is only one moment when my attention started to wander, when Luma and other cows are moved to new pastures. For the most part, the experience is intense and gripping. Luma is introduced to a male and is impregnated. A scope is then placed in her rear end. ‘Yes, she’s pregnant,’ a vet explains. We are told that the calf is expected in thirty-six days; the duration seems indecently short. It will be Luma’s sixth. There is a second birth, Luma once again cleaning up her calf.

In the film’s closing moments, Luma is led away on her own and given a bucket of feed. Special treatment? She is shot in the head. After our initial shock, we wonder: did Arnold always intend to end her film this way? It certainly felt inevitable.

The film confronts us with the harsh necessities of farming without taking a moral or emotional position. We don’t see Luma as farm employees do, rather as a creature who is used up and discarded.

Whilst we see what looks like the remains of an umbilical cord – or a rope tied to a foal’s legs not yet removed from Luma’s womb – hanging from her rear end in the early part of the film, we never see cows defecating. The answer to the question, does a cow poop in the woods, is ‘not in this movie’. Given the ‘warts and all’ depiction of farming, it is a curious omission, though I daresay most audiences are grateful. (Maybe it is one for the DVD extras.) Nevertheless, Cow is a radical piece of filmmaking, forcing us to see how civilization impacts on the natural world. The cows aren’t showered with endearments, just a firm, ‘come along.’ Spending 90 minutes estranged from human behaviour invites us to consider our feelings towards ‘essential’ activity.