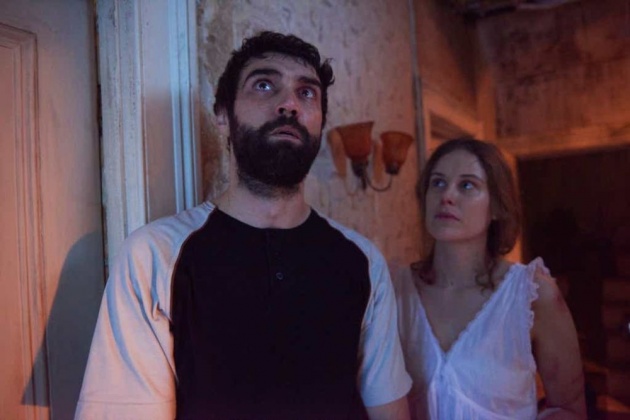 Pictured: 'In Balham, no one can hear you scream.' Tomaz (Alec Secareanu) and Magda (Carla Juri) in a scene from the British horror film, 'Amulet', the debut feature from actress turned writer-director, Romola Garai. Still courtesy of Republic Film Distribution (UK)

No one ever questions why first-time male writer-directors choose horror. It is unfair to ask this of actress-turned-writer-director Romola Garai. Garai has an eclectic CV, cast as the female lead opposite Diego Luna in the immemorable Dirty Dancing spin-off Havana Nights as well as appearing in the films Atonement, Suffragette and The Last Days on Mars. She most recently played the titular Miss Marx for Italian director Susanna Nicchiarelli.  Garai has not found the award-friendly or Hollywood-calling card role that will transform her into an A-lister, unlike her contemporary, Keira Knightley. From a career point of view, going behind the camera makes sense, a move she has cultivated for some years, having directed the 2012 short, Scrubber. Garai has written a number of as-yet-unproduced screenplays (including adaptations) for mid-range budgeted movies before penning the modestly budgeted Amulet, where most of the action takes place in a house and where Dartmoor doubles for Eastern Europe.

The film opens with images of a forest, including the arresting overhead shot of some trees. We are introduced to Tomaz (Alec Secareanu) waking up in his hut, before going to work at a checkpoint. Coming towards him at speed is a woman in her forties, Miriam (Angeliki Papoulia). Speaking in English – this is one of those movies where foreign languages aren’t spoken - Tomaz does the ‘stop or I’ll shoot’ routine. For her part Miriam stumbles and disappears below the frame. Tomaz gives her sanctuary in his hut and learns that Miriam wants to be reunited with her daughter. ‘You’ll never get across the border,’ he insists. We see a truck filled with soldiers, some bloodied, pass through the checkpoint. ‘They’re gone,’ he tells Miriam. It is unclear how Tomaz gets his supplies. He doesn’t appear to have a radio. At any rate, Miriam is not persuaded by Tomaz telling her that the war will be over soon. She makes a run for it. Tomaz kills her. His motivation is never made clear. My guess is that he fears she will be captured and then reveal that he had given her shelter. An alternative motive is that, in spite of the age gap, he had fallen for her and didn’t want her to leave, attracted by the idea of making an instant family. Digging a hole, Tomaz discovers the amulet of the title, though given the straightness of the front of Tomaz’s hair, I did briefly wonder whether the title of the film was A Mullet.

At any rate, Tomaz feels guilty. The next time we see him, he is in London, has a beard and is sleeping in an abandoned building with other migrants. Tomaz awakens with his hands tied up with carpet tape. He does this, we discover, to stop himself clawing at his face, though I daresay cutting his fingernails might achieve the same effect. In spite of limited opportunities to shower, Tomaz gets day work as a labourer. He looks at another man’s shoes and warns him it is dangerous work. Before then, Tomaz and his friends get shouted at by a passing racist motorist, telling them to ‘go home’. One night, Tomaz is awakened by another migrant who tells him the building is on fire. Tomaz has to cut through the carpet tape with a knife between his knees before he flees the premises. In an alley away from the building, he collapses. It is noteworthy in this sequence, that Garai and her cinematographer Laura Bellingham suggest fire by having an out of focus yellow light in the corner of the frame. Garai uses sound to suggest the arrival of the fire brigade as Tomaz emerges into the alley. 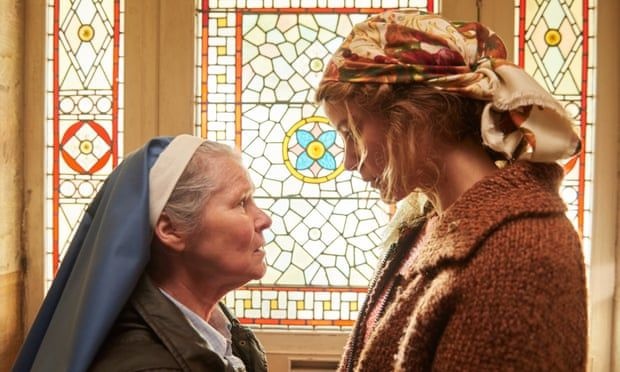 Pictured: 'You could use a man about the house.' Sister Claire (Imelda Staunton) tasks her parishioner Magda (Carla Juri) to accept a house guest in the British horror film, 'Amulet', written and directed by Romola Garai. Photo: Rob Baker Ashton. Courtesy of Republic Film Distribution (UK).

When we see him next, bloodied and stirring, Tomaz is attended to in a hospital bed by a nun, Sister Claire (Imelda Staunton). The nun has a kindly face, though there is a saying I have just invented, never trust an apple pie. She is keen to help Tomaz get back on his feet. She has looked after his possessions. ‘Did you find some money?’ he asks, referring to the roll of fifty-pound notes he had secreted about his person. ‘No,’ says Claire. She takes him to a house in Balham where he can stay for no rent. Just two people live there, Magda (Carla Juri) and her ailing, invalid mother who doesn’t go out. Right on cue, the mother moans. She is, as Tomaz is told more than once, in an enormous amount of pain. However, she is near the end.

‘You’ve made your first mistake, turning down Magda’s cooking,’ Sister Claire tells him. Tomaz reluctantly helps himself to a lumpy brown stew that might conceivably be the crew’s leftovers. His appetite recovers. Sister Claire gives Magda some reassurance, but Magda doesn’t want the extra house guest. As evidenced by the bitemarks on Magda’s arm, her mother is more than a handful – or armful. After leaving, Sister Claire drops Tomaz’s roll of bank notes into a drain, easy enough for someone else to find them, since the notes rest of top of it. Just as well really, it might be the film’s sundries budget. While short of cash, Tomaz discovers that he still has that amulet, which we understand is a metaphor for his guilt – and then some.

Normally films about houses where strange stuff happens don’t waste any time in dumping their protagonists in sub-standard accommodation. In movies such as The Amityville Horror or The Conjuring we are introduced to escalating creepiness at the twenty-minute mark. Amulet takes its time. That said, Garai’s scenes are economical enough. She drip-feeds detail, with Tomaz’s story told through a steady series of short flashbacks.

After an uncomfortable first night during which his nightmares continue, Tomaz is determined to make himself useful. He finds a leather-bound bag of tools, monogrammed ‘GC’. Thanking Magda for the clean shirt that she had found for him, he is also curious about the house. ‘A man used to live here,’ Magda tells him. ‘But then he went away.’ Tomaz discovers a hole just behind the toilet and is just about to reach into it when Magda objects. She doesn’t want him to do any repair work. Later, chipping away at the ceiling, he discovers a curly design, a mark to ward away demons. He is shocked and falls off his ladder. But Magda can’t see what he sees. 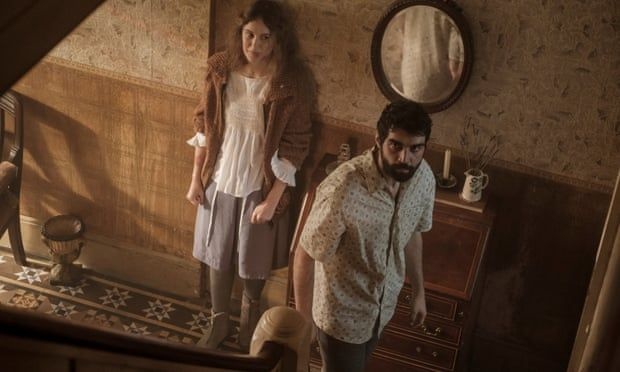 The house itself has no functioning electricity – one overhead Magda doesn’t have to worry about. ‘Mother tried to stick her fingers in the electric socket,’ she tells Tomaz. Later, we see a bare light bulb flash on and off, the nearest Magda gets to holding a party indoors.

Tomaz discovers that she doesn’t venture far from the house. Her sole motivation is to visit a food market, where she buys fresh produce. In a later scene, we see her remove the insides of a fish. ‘That took some guts,’ I observed. Magda is desperate to go dancing and Tomaz is happy to accompany her, though not before he tries to clean the lavatory and discovers a pink-skinned bat in the toilet bowl. The bat bites him, but Tomaz is given penicillin when treated for his wound.

On the dance floor, Magda loses herself and Tomaz gets woozy. He hasn’t made a pass at her because it isn’t that kind of movie. He is keen to find out what is going on upstairs. For her part, Magda peers through a keyhole – never a good idea in a horror film and gets the side of her face scratched with a sharp pin, one of the film’s few jump scares.

In the climax, Tomaz does indeed meet the mistress of the house and makes a series of unpleasant discoveries. I won’t set out exactly what they are, but we discover the source of the bats, the regenerative power of evil – you can’t just stick mother in the neck – and that one preternaturally cheerful character isn’t what they seem.

Garai has flipped the gender roles in a horror film so that a vulnerable male is our principal viewpoint character. He is the one in danger, though nothing yucky happens to him until near the end. The male is also the problem. Tomaz’s crime essentially recommends him for a job for life and takes the film into surrealist – almost David Lynchian – territory. Indeed he climbs through a fallopian tube type passage to confront the living embodiment of his amulet. Then his belly starts rumbling and he starts to scream.

This unfortunately isn’t the end of the film. Stopping off on the open road, Magda meets Miriam in a garage. It is a hedge-betting, jolly sort of ending, one that defangs any sort of comment about the need to overcome the tyranny of men over women.

The twist is the best thing about the movie, followed by the surreal bit and the bat-biting. Garai stated that she consistently wanted to wrong-foot audiences, so that characters seem neither one thing nor another. Explaining the twist in a rapid montage of flashbacks – you may know the sort – Garai eschews any sort of discussion about why male violence occurs and whether it is always inevitable. Once you stick the tag ‘evil’ on someone, you remove debate. In this regard, the horror genre is reductionist and certainly one of my least favourite. Secareanu is very watchable; we root for Tomaz to a degree, overlooking his violent act at the beginning (though we shouldn’t really). In Garai’s moral universe, there is no redemption, only punishment. Amulet is not a film that is going to win any medals, though it does a good job of presenting Balham as a hip part of South London