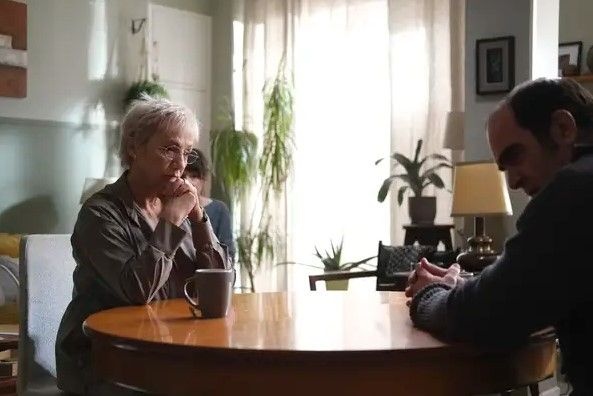 Can an act of terrorism ever be forgiven?

Justice is relative, based on concepts of injury and a legal system that determines intention, burden of proof and applicable tariffs. Forgiveness is outside the purview of any court. The bereaved assess the mental state of the perpetrator – the expression is ‘to look into their eyes to see what is in their hearts’. Then they decide. Sometimes forgiveness takes place in absentia, typically when religion is involved. Sometimes forgiveness is impossible, because the sense of hurt colours everything. Terrorism may be indiscriminate, but grief is personal.

Director Icíar Bollaín’s fact-based film, Maixabel, deals with a widow, Maixabel Lasa (Blanca Portillo) who agrees to meet with her husband’s killers, members of the proscribed terrorist group, ETA, short for Euskadi Ta Askatasuna or ‘Basque Homeland and Liberty’, under a scheme brought in by the Spanish Socialist Workers’ Party (PSOE). Most of the film focuses on the man who pulled the trigger, Ibon Etxezarreta (Luis Tosar), who is moved to a low-security prison following the death of the grandfather who raised him. Therein lies a conundrum. To forgive someone is to get to know them, to understand their logic and motivation and to feel their sense of grievance.  Bollaín doesn’t make the case for Basque separatism. She treats it as a well-known cause, with arguments rehearsed for over fifty years. The other route to forgiveness is to recognise when a person has reflected on their actions and renounced them. Here, it is the killing being renounced, not the fight for Basque separatism. Killing as a means to achieve a political end - we can all wish for a worldwide renunciation of this.

I’m not sure how much time I wanted to spend in the company of Luis Tosar’s eyebrows, which are prominent and draw the viewer’s gaze. But whether I liked it or not, Bollaín forces the audience to dwell on Ibon, a surly, aggrieved prisoner who is reconciled to his sentence and who would rather be spending time with his other ETA conspirators than in a minimum-security prison from which he can visit his mother (María Jesús Hoyas). Ibon considers the leaders of ETA to be idiots. He is sorry that he followed them. But he could also regret that they made poor tactical and strategic decisions, not that they sought to achieve Basque separatism through targeted killing.

The film begins on 29 July 2000 in Tolosa, with the execution of Maixabel’s husband, Juan Mari Jáuregui (Josu Ormaexte), the former civil governor of Gipuzkoa, who is sitting with his back to the entrance of the Casino café and does not see the killer coming. Bollaín contrasts Maixabel applying make-up with a car pulling up outside the café and two men getting out. The car itself is stolen. It can only be started with two wires sparking one another. Juan Mari chose not to have a bodyguard. He also has some sympathies with ETA’s cause and was once a member of the group. Why then is the order given to kill him? Before his death, Juan Mari spent most of his time in Chile in self-imposed exile, working as a director of a company that runs airport shops. He returned to Spain for a two-week holiday to celebrate his silver wedding anniversary (a detail left out of the film). Having entered the bar, the two assassins have a drink, then approach Juan Mari from behind and shoot him before escaping to their getaway car. As news of the murder is reported, Bollaín introduces Juan Mari’s daughter, María (María Cerezuela). She is out with friends by the river. Two of her friends see a news report of the assassination. Maria is encouraged to go into the water. Meanwhile, Maixabel hears the telephone ring. She does not answer it. It rings again and suddenly she knows, a tear trickles down behind her glasses’ lens. When adults arrive at the picnic area, María looks up. Her face collapses into grief.

As the killers speed away, they monitor the police frequency and find themselves behind a police car. The police are looking for a black Renault. The men are in a white car. ‘Don’t overtake them,’ the assassins tell the driver. The driver boldly does so. The police car doesn’t react. Moments later, the police are told to look for a white car with three men inside. By then the trio are way out of sight. We then see the car being torched. The men celebrate getting away with it. When we see them next, in the very next scene (set in 2004), they are inside a Perspex booth slamming their palms against it, stating that they do not recognise the authority of the court. The female judge sentences them regardless. Maixabel looks at them, as does an old man. We do not immediately identify him, but we later realise that he is Ibon’s grandfather.

Cut to 2010. Ibon is moved to a minimum-security jail. The governor expresses condolences for the death of his grandfather. He suggests that after the funeral, Ibon, ostensibly a political prisoner, might be able to remain there. Ibon, whose face resembles a furnace even when close to repose, wants nothing of the sort. He reacquaints himself with another member of ETA, Luis Carrasco (Urko Olazabal) who has been in the minimum-security jail for some time. Ibon does not respect him. Luis is one of those prisoners given a lighter sentence because he co-operated. Luis attempts to persuade Ibon to stay.

Ibon is permitted to visit his mother, first on the day of the funeral, and subsequently. We learn that Ibon’s grandmother found Ibon’s gun but said nothing. She knowingly concealed Ibon’s involvement in terrorism. Ibon respects her. We don’t learn why Ibon’s mother didn’t raise him, though we sense that Ibon’s father, who is never mentioned, wasn’t in the picture. We also see Ibon in the village where he once lived being given the cold shoulder; Ibon forces men to talk to him. He is angry that principles have been abandoned.

Maixabel has moved into political activism. She appears on television to honour the victims of all terrorism, not just those killed by ETA. (‘I know it’s controversial,’ she reflects.) Maria, now a mother herself, is frightened for her. Later, she will insist that Maixabel gets a bodyguard.

At this point, Maixabel is approached to participate in a programme where the victims’ families meet with those responsible for the death of their loved ones. Maria isn’t interested, but Maixabel, whose face mainly projects a passive curiosity does so. She is upset to visit her husband’s grave. The headstone has been smashed and defaced with red spray paint. Later, we see it repaired. It is in good condition for the final scene. 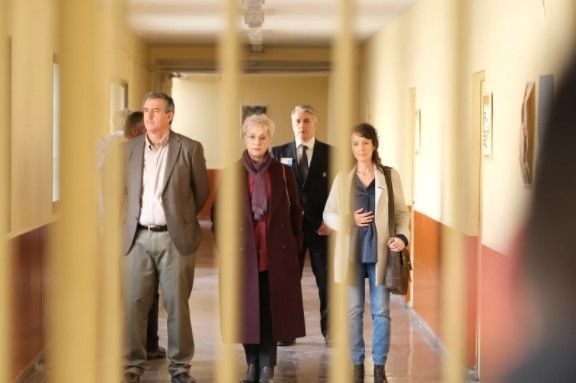 The remainder of the film builds to Maixabel finally meeting Ibon. First, she meets Luis, who is repentant. Ibon takes a lot more convincing. Luis speaks to him in the recreation yard, in which we are startled to see Ibon in a pair of black shorts; I thought prison clothing was prescribed. The two men jog around the wire-fenced yard. When Ibon is tired of talking – and Tosar excels at moody looks – he runs round the yard at pace, leaving the older man behind.

Maixabel also visits the bar where her husband was killed. ‘I would have sat here,’ she says, indicating a chair that faced the entrance. ‘He was so trusting.’

The biggest dramatic twist is that, before Maixabel and Ibon can meet, the scheme is discontinued. Maixabel decides to go ahead with the meeting anyway, even though it is not approved by the authorities.

When they meet, we experience a complex mix of emotions. We expect to be emotionally moved but Bollaín and her co-screenwriter Isa Campo don’t achieve this effect; perhaps because they are not striving for it. Maixabel is at pains to explain how sympathetic her husband was to ETA. How could they kill him? ‘Orders,’ is the terse response. At a certain point, there is transference. ‘I would want to be your mother,’ explains Maixabel. ‘I would want to be your husband,’ replies Ibon. 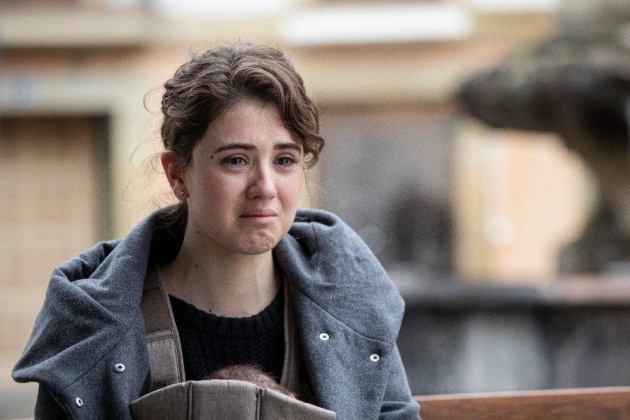 Pictured: 'You can meet him, Mum, but I won't.' Maixabel's daughter, María (María Cerezuela) in a scene from the fact-based Spanish drama, 'Maixabel', co-written (with Isa Campo) and directed by Icíar Bollaín. Still courtesy of Filmfactory / Buena Vista International (Spain)

The finale, in which Ibon stands next to Maixabel at a memorial service for her husband, bearing a wreath with ten red roses, one for each year since the killing, and one white rose ‘for peace’, is prefigured by the film’s advertising. There is some scepticism in the crowd. However, they all join together in Basque song by the previously defaced, now well-presented headstone. This represents reconciliation of sorts.

Maixabel was seen by 500,000 viewers in Spanish cinemas in the autumn of 2021, a significant achievement for a film released during the Covid-19 pandemic, says its director. It opened on the 10th anniversary of ETA laying down its arms and is dedicated to the 829 individuals killed by ETA. There is no doubting the film’s sincerity and that it resonated with its audience at its premiere in San Sebastian (Basque name: Donostia).

Portillo’s Maixabel is dignified and brave; she finally gets bodyguards, as we see two men behind her as Maixabel walks across a sandy beach. Her arc is not that of a woman who damns her husband’s murderers who comes to understanding them. She is more a catalyst for affecting a change in the ETA members themselves, in recognising the pointlessness of murder. Her suffering is almost irrelevant; the most important gesture is that she was prepared to give Ibon status, to let him stand next to her.

To express regret is not the same as to show it. For me, Ibon doesn’t show that he finally respects and honours Juan Mari Jáuregui. Did I miss something? Ibon’s major change is that he is no longer prepared to express solidarity with the majority of ETA’s other political prisoners behind bars. However, he is cynical to begin with. Should Basque separatists, who continue to campaign for self-governance, honour the contribution made to their cause by ETA? The film avoids that question, leaving it to the audience to ponder.