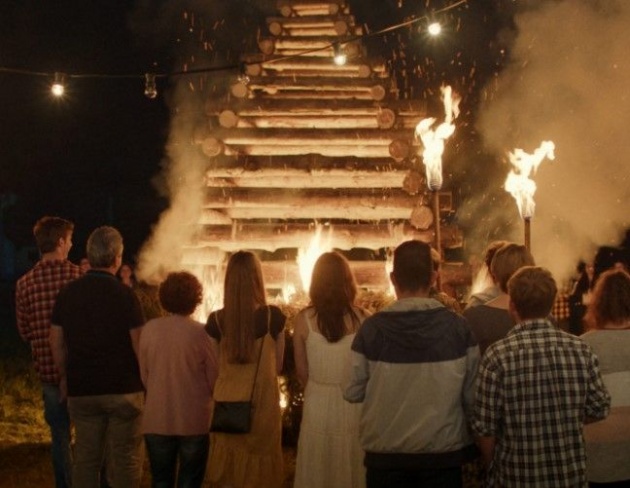 As pleased as I am to feature a Slovakian film in this series (the first), I confess to being disappointed with Nightsiren (Svetlonoc), directed by Tereza Nvotová from a screenplay she co-wrote with Barbora Namerova, their second collaboration after Nvotová’s 2017 film, Filthy. It’s a not-so-everyday tale of a young woman who returns to the village she fled as a child to reclaim her inheritance and is treated as a witch by a community inculcated with misogyny. Things come to a head in the seventh chapter when two young children go missing and male outrage reaches tipping point. Where it fails is in rooting superstition in a believable context. Even allowing for the lack of television in a rural community that slaughters geese, they are exposed to modern hospitals and computers. I wondered why Nvotová and Namerova didn’t instead focus on a community that chose to believe superstition to deal with reality rather than accept the modern world. They go to church but that’s not the same as believing in witchcraft.

In the arresting opening that sets up the film’s aesthetic – medium close-up hand-held shots that follow the action - we hear hammering outside while a young girl, Šarlota hides within. Dragged out of the room by her hair to be receive a punishment from her mother, Šarlota breaks free and runs. Her sister follows her. Šarlota asks her sister to stay home but she carries on running, falling over a cliff edge that we didn’t know was there. Horrified, Šarlota carries on running.

Cut to ‘Chapter 1: The Arrival’. Šarlota (Natalia Germani) is seen climbing a hillside. She stands on the site of the family cabin, only it has been burnt down. The only trace of it is the wooden door in the floor that she had hidden behind. There is a brief flashback to the hammering and her final day in her mother’s house that makes her shudder. Šarlota carries on walking until she discovers another cabin, belonging to a former neighbour Otyla (Iva Bittová) left abandoned. She finds a chest inside, the contents of which include a teddy bear with a child’s tooth inside. The bear is familiar to her, the tooth not so much. This is also a film that features wolves, snakes and herbs that sell for 150 Euros a kilo. The cabin itself is associated with witchcraft. While outside wearing her headtorch, which resembles a third eye, Šarlota sees a group of young men, and one woman show up on mountain bikes. The boys start a fire. For a moment we think they are going to torch the cabin. They hear Šarlota and ask her to step forward. They ask for her name. She tells them. ‘Don’t say that name here.’ They ask for proof. She provides it. She has received a letter that asks her to collect her inheritance. Having entered the cabin to produce documentation, Šarlota also wields an axe. The men leave but Mina (Eva Mores) is left behind. They talk; Mina is a lot friendlier than the company she keeps. Šarlota, we discover, has a horizontal scar on her belly and a sonogram. At one point, she asks Mina to help remove her stitches. ‘Why don’t you do it? You’re a nurse,’ Mina asks. ‘It seems gross,’ Šarlota replies. Lest I forget, there is also a handsome sheep farmer, Rado (Noel Czuczor) who passes by with his flock. His handsomeness has a use later on.

In ‘Chapter 2: The Village’, Šarlota heads down the hill to visit the mayor’s office, producing her letter. ‘I’m supposed to come today,’ Šarlota insists to two older women who tell that the mayor isn’t there and usher her out quickly. It is as if they don’t want to spend any time in her company. Outside, she is recognised by an old woman, Ann (Jan Olhová), who invites Šarlota to stay with her. ‘Better than staying in the witch’s cabin,’ she remarks. Šarlota, who recognises Ann as a woman who lived on the edge of the village and is somewhat different in her own right, nevertheless refuses. She does however seek out Mina, passing a barn in which a man is having sex with a woman. We discover later on that the man is an abusive husband whose wife has taught herself to accept his way. ‘I took my vow,’ she explains later.

Šarlota and Mina share a bed in Mina’s cabin before they are awakened by more hammering on the door. The men outside are dousing women with water. It is apparently an Easter tradition – wet a woman, collect an Easter egg. The women are unenthusiastic to a fault. A man with whom Mina has slept – ‘it was just sex; I sleep with who I want’ – barges into the cabin. He and his buddies grab the two women to throw them in a lake. In the fracas, Šarlota kicks a boy bearing a Super Soaker, somewhat ending their fun. ‘Who kicks a child?’ one of the boisterous, now sulky young men asks. Who dumps a woman in the lake without her permission?

Šarlota hasn’t read the book ‘how to win friends and influence people’ but then no one in this film has. Perhaps it is not such a good book. In some books, you (somewhat heretically) skip a few chapters – I confess I forgot the name of chapter three. Šarlota does make another friend, Helena (Juliana Olhová) who confesses she is in love with Mina. ‘But now she is your friend and doesn’t want to know me,’ she sulks in that pouty way that women who always get their own way in movies adopt. (I’ve not seen it in real life.) Šarlota, who is in no way in love with Mina, tells her to go for it. She will not however stay for goose dinner. When after slicing the neck of a bird, old lady Ann cuts it open to reveal the foetus of a gosling, Šarlota is blamed for her witchcraft. It is said the Otyla (Chapter Four) did something to Šarlota and her sister. But what? 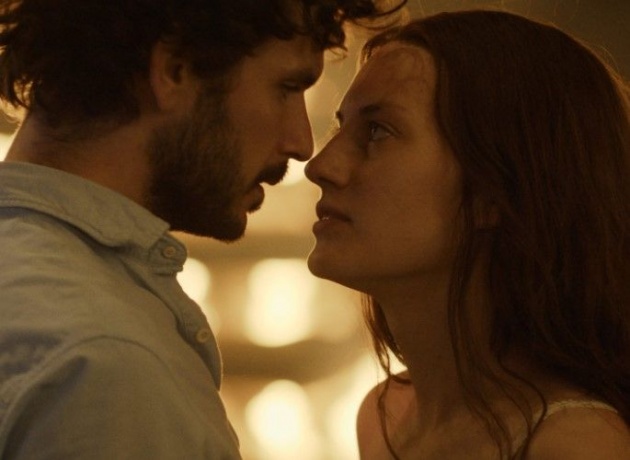 After a sequence in a cave, in which Šarlota leaves Mina behind and finds herself facing a wolf – later (in her mind) she will be pursued by a whole bunch of them - the film builds to Midsummer Night (Chapter Five) which is surprisingly soon after Easter. There’s an outdoor party. A fire is lit. Mina is cursed by the boys in the yard, having slept with one of them, and spikes a round of drinks. Rado the sheep farmer is there. After one shot (just one?) he invites Šarlota for a dance. Sparks fly. They are the only ones moving to the music until some guy shouts ‘let’s dance’. One guy cuts in on Šarlota and touches her chest. Šarlota pushes him to the ground. Time to split. The ‘SOT’ in her drink really takes effect and suddenly Šarlota sees blue figures all around her, as if a naked, body painted dance troupe had entered the forest for choreography and fun times. Mixology is a form of alchemy. Perhaps what the people of this Slovakian mountain village fear the most is a good bartender.

At any rate, Šarlota and Rado are reunited. There is a gratuitous love scene. This is a film in which the male interest is tangential to the plot. He isn’t spoken about in any significant way; people don’t even remark that he looks like Jon Snow (Kit Harington) from Game of Thrones, surely filmed nearby. In the final two chapters ‘Sisters’ and ‘Witches’, there is an improbable development that explains the letter. In the final chapter, Šarlota and Mina face being burnt alive. Apparently, the police don’t really serve Slovakian mountain communities.

There are details in the film that don’t make sense. We don’t hear Šarlota tell Mina that she is a nurse. Yet she knows that she is one. Šarlota doesn’t ask how she knows. There isn’t a particular reason why Šarlota should visit the mayor on a particular day. She does however discover, in a crude piece of exposition, who wrote the letter. It is unclear why the men think they can get away with murder in the 21st Century without the cover of war. 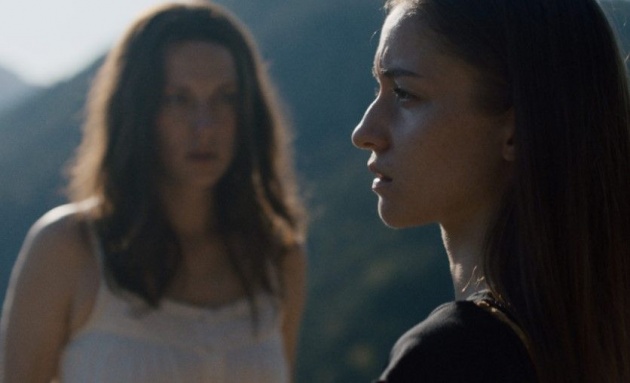 Pictured: Mina (Eva Mores) and Šarlota (Natalia Germani) at the cliff's edge in a scene from 'Nightsiren', a Slovakian drama directed by Tereza Nvotová. Still courtesy of Intra Movies / B Film / Moloko Film

The title doesn’t make a heap of sense either. This isn’t a film whose logic can be traced back to its opening scenes. It is busy and at times visually impressive. The music by Robin Coudert and Pjoni thunders and portends in the way horror movie scores should. This isn’t a horror film though. At the end it is about two women who are literally happy in their own skin. There is a critique of the acceptance of domestic violence, but it doesn’t go very far. Nvotová doesn’t explore the culture that condemns women as ‘witches’ to any degree, rather uses it as a form of moral panic. I think I’m right to expect a little more. Unless the desire not to explore misogyny, rather to accept it as a pervasive sickness, is the film’s point.