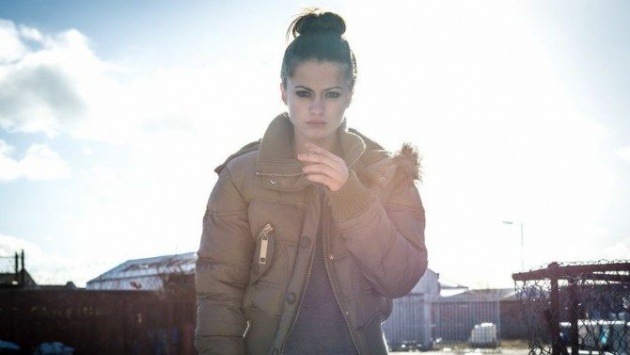 There aren’t many novelists who have moved successfully into film directing. For every Neil Jordan, perhaps the most accomplished balancer of a writing and film-making career, and Bruce Robinson who went the other way from movie-making to novels, there is Paul Auster and Norman Mailer who both became unstuck working with pictures.

There are still fewer women novelists who may have made the transition. So Helen Walsh, the British novelist turned writer-director of The Violators, is at the very least in British filmmaking terms a trail blazer. That isn’t to say that her debut feature - a ‘micro-budget’ drama about a fifteen year old girl, Shelly (Lauren McQueen) excluded from school living with her two brothers, who makes two unfortunate new friends, with a troubled upper middle class girl and a much older loan shark, Mikey Flanagan (Stephen Lord) - is a roaring success. It is very far from that. It demonstrates the pitfalls of first time directors working in a medium they appreciate but don’t fully understand.

Walsh’s self-confessed point of reference is the social-realist work of the Dardenne Brothers. When she met her director of photography eight days before shooting, she had a long conversation about the opening shot of The Son. But long sequences take time and money to set up. Walsh, who shot the film in four weeks, had neither. What we see instead are lots of scenes of Shelley walking over fields or down the backs of alleys – if there is an alley that oozes neglect, Walsh’s camera is there. These shots do not convey realism.

The title suggests a B-movie drama, a ‘roaring rampage of revenge’ to quote the tagline for Kill Bill. It isn’t exactly a spoiler to say that it isn’t. The title comes from a sequence that Walsh filmed but isn’t in the movie in which two girls kidnap a man and violate him. It sounds like a completely different movie than the one Walsh ended up making.

Novel writing and movie directing are disciplines. You have to know what you are leaving out and what you are left with in order to determine the effects that you are hoping to achieve. Walsh described her script-writing process as ‘casting first, then paring back’ and only discovering the style of the film on the first day of shooting. This is different from directors who imagine the sort of film they want to make and then work with their collaborators to achieve it. In lay terms, The Violators represents a loss of artistic vision, a process more akin to a documentary maker discovering her subject. This process may yield rewards. But if you are married to a narrative in which scenes demand a coherent pay-off in the world you are creating, you end up betraying the audience. You ask them to care about the conditions in which the characters find themselves and then avoid any sort of meaningful resolution.

The Violators starts well. It begins with an out-of-focus shot of a ‘penny shuffle’, a machine that invites gamblers to drop a coin into a slot to dislodge more coins balancing precariously over an edge. The shot is held for some time before Shelly, back to the camera wearing a Parka coat – a signifier of working class poverty, utilitarian comfort but no style, designed for extreme temperatures but worn to disguise body shape, a ‘check out the spikes on my fleecy hood’ coat that shouts ‘don’t come near me, all right’ – drops a few coins fruitlessly. They call them fruit machines in arcades, but they’re fruitless really, draining the last squeezed drop of fading hope. Shelly wanders round the arcade before retrieving her twelve year old (mixed race) brother, Jerome (Callum King Chadwick) from her older brother Andy’s (Derek Barr) front room. There’s football on - penalties. Shelley takes Jerome to bed. The next morning, she prepares breakfast by scoping up Cocoa Pops (or equivalent) with her hand before pouring them into a bowl and drinks water from the tap. It is her fifteenth birthday and Jerome has bought her a card where she has had to alter the age with a biro and a present of a pencil tin. Andy, who we first think of as either Shelly’s boyfriend or a young looking dad, has bought her nothing. Instead he drags them to Job Centre Plus for an interview.

In the course of these scenes, Walsh loses verisimilitude. Jerome is way too obedient as he is taken away from the footie. Andy explodes into anger after the Job Centre Plus interview because Jerome gave his mother’s address (‘I forgot’). ‘I know your game – you’re hoping to move back in with her,’ cries older brother Andy. There is the threat of violence and of real impact on their income. There is a middle class social worker, but Shelley tries to avoid her.

Having reached pubescence, Shelly is the object of lust. As she prowls around looking to break into cars – we see her do that later on – so boys want to give her something in exchange ‘for a suck’. She ventures into a pawn shop to exchange her necklace for a lighter. Mikey, the bearded man behind a counter doesn’t agree, but follows her and offers her the lighter for free. ‘Don’t I get something?’ he asks. Shelly lives in a word where every act of apparent generosity from a stranger is treated with justifiable suspicion. As we learn later on, something very bad happened in her childhood involving her father.

Where is her mother? We never hear about her. The suggestion is that all three are abandoned, with Andy functioning as a legal guardian to keep the family together. Shelly isn’t close to him – the suggestion is that all three of them have different mothers – and they don’t have conversations where they talk about their future. They live in their own little world - bubbles of drift. There is a knock at the door. It is Mikey. Andy owes him money. Bizarrely, instead of staying behind a locked door, he attempts to flee over the back garden wall. This is another scene that defies belief. Mikey catches up with the brother and starts beating him up. Then Shelley appears.

Mikey also has an admirer, Rachel (Brogan Ellis). She calls him whilst he is in the shop. He pretends to be in Manchester. The location of the film is never specified, but the film was shot in the Wirral (Birkenhead). We see a military boat moored in harbour, cranes and gulls wheeling overhead. Rachel catches Shelly breaking into a car and tells a passing security man that it is hers. She then takes Shelly to her house. Rachel has her own problems with her mother, who is dating a man who uses her for sex. We see Rachel slipping into a house and stealing things – this before she meets Rachel.

After Shelly steals from Rachel’s house and tries on a top – we wonder if Rachel too desires her as she watches her change – Rachel introduces Shelly into her rebellious world, going to a restaurant, ordering sparkling wine and then spits it into a bucket. At Rachel’s request they leave the restaurant without paying. Rachel, who resembles a young Chloe Sevigny, is needy, a student who takes fencing lessons, who possibly has anger issues. Meanwhile, Mikey gives Jerome some trainers and offers Shelly a gift. Andy encourages her to get it. It is a dress. Shelly refuses it, but the next day the gift is waiting for her.

About halfway through, there is a bombshell. The social worker tells the family that their father has got parole. All three stood up in court and gave evidence against him. Now they are afraid for their lives. Andy already knew but said nothing. Why? We don’t find out.

There is one character, Kieran (Liam Ainsworth) a young man who signed up for the cadets heading for a career in military service, who offers the family a way out. He and Jerome bond over repairing a bicycle. But then, in an unconvincing scene, the boy has it stolen and is beaten up. He spends most of the subsequent scenes motionless and in bed – Walsh really doesn’t know how to direct young actors. When he does come down the stairs in response to Mikey banging on the door it is to tell Mikey (off camera) that the family fears for their dad. Mikey exploits this fear by telling Shelly that he’s been around.

This revelation leads to a change in Shelly’s relationship with Mikey. She is willing to let him have sex with her in the back of his Range Rover. Walsh doesn’t flinch from showing a man having sex with a minor and we fear for Shelly who has abandoned her last line of sceptical defence.

By the end of the film, there is a confrontation involving a gun looked after by Rachel but by this point, the action veered on the risible – not least because the gun looked like an antique. If there is one cliché that Walsh should have been aware of is that characters are never just given guns; they are always shown how to fire them (so we know there are bullets and that the gun works). It is disappointing that the film ends on such a damp squib. One key revelation involving Rachel’s father is muffled by inaudible sound.

Walsh has a reputation as a novelist but on the basis of this is unlikely to generate one as a filmmaker. The film needed a little more money, a more certain touch with character and a sense of what it is really about. The scenes in which the social worker barges in and pronounces are risible – she is just there to kick start the plot. The events in the film, though based on social phenomena – children left to fend for themselves, loan sharks and a disturbed middle class adolescent - are rendered in a banal way. I would go so far to say that The Violators is an embarrassment. After emotional scenes, the actors seem exposed – what they give of themselves playing the parts isn’t used in a meaningful way. Walsh needs a filmmaking mentor and to admit where her talents don’t lie. She can admire the best in World Cinema but cannot reproduce it. My least favourite scene featured Andy suddenly leaving a pub hearing that his father was back – none of the extras turn round. Sudden movement always produces a reaction. To film life, you have to know what life is.