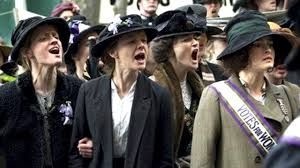 When you undertake to watch fifty-two films directed by women in fifty-two weeks, you expect to make some discoveries. These may be unpleasant truths. Alternatively, you could experience a pleasure that you did not imagine.

Suffragette confronted me with some unpleasant truths.

For starters, there were no women in the audience. Just a few men dotted around the expanse of PictureHouse Central Screen Two in London’s Shaftesbury Avenue for a 14:15 Saturday afternoon screening. It could be that for women, shopping is still more pleasurable than cinemagoing . You can talk during shopping, for starters. Now, with mobile phones, instead of asking your friend whether you look good in the dress that you are trying on, you can post an image onto Facebook and crowd source opinion on a potential purchase- ten likes from friends will make you part with your credit card.

It could just be that films made by women are not as much fun as those produced by men. By the way, I don’t believe that. There are plenty of women who make me laugh: Lorrie Moore, Miranda Hart, Margaret Thatcher (the latter ‘at’ rather than ‘with’). Women are perfectly capable of giving pleasure in ways that are neither sexual nor food-related, just as men are perfectly capable of saying ‘I’ll get the check’.

Suffragette is nominally about an ordinary working woman who joins the suffragette movement in pre-World War One Britain. It is a British film, with a special guest appearance by Meryl Streep (of the smile and wave variety) as Emmeline Pankhurst, produced by the writer-director team of Abi Morgan and Sarah Gavron.

My problem with the film is that Morgan and Gavron don’t ‘do’ the working class. The laundry woman Mrs Watts, played by Carey Mulligan spouting her lines in a ‘cor blimey, stone the crows, drop yer haitches’ accent, is not a protagonist in any sense understood by connoisseurs of narrative fiction. She participates in but doesn’t drive the action. She is a mostly an onlooker. Mrs Watts has risen in her laundry because she was a favourite of her employer (Geoff Bell), who, it is implied fathered her son. Her husband (Ben Whishaw), by his own description ‘took her on’ to (essentially) raise her son respectably. Why do they not have more children? We see Mrs Watts’ veins early on, evidence of either an ongoing medical condition or disfigurement. At any rate, it is safe to assume she is no longer capable and that this may drive a wedge between her and her husband. Being a ‘father’ gives him some sort of authority over her, but he knows that this is fragile.

In another sort of narrative, Mrs Watts would fall for another man, a dashing sort with perfect teeth, pale but muscular physique – and look, he doesn’t sunbathe in his string vest - who makes her feel warm and wanted. Instead, she is hooked by the suffragette movement.

At no point in this movie are we convinced that votes for women will make a material difference to the life and well-being of this poor, exploited laundress – don’t call her a washer woman. The suffragettes are a gang. They chuck bricks at windows, shout at coppers and detonate bombs at the summer house of the Prime Minister, David Lloyd George. They look out for each other, ensuring their members, once separated from their families, have access to second-hand clothes, basic rations, medals for incarceration – the 1912 equivalent of a tattoo – and the opportunity to sleep in a cold, draughty church.

I have no doubt that Morgan and Gavron did their research, but I repeat: they don’t ‘do’ the working class. It is not simply that Carey Mulligan is miscast in the leading role (reader, she is) but Gavron and Morgan never make us feel that Mrs Watts is a real person. Sure, she has back story, part explained, part implied, but every person has a sense of their own reality. Mrs Watts never appears to say,’ I know I’m being exploited. Fings have to change.’ We don’t even know if she can read.

There are plenty of vivid performances that surround Mulligan to reinforce the sense of a vacuum at the centre of the movie. Helena Bonham Carter is a delightfully self-assured doctor who, at one point, is incarcerated in a so-middle class way. Anne-Marie Duff has the right sort of lived-in face to suggest that she is a full paid up member of the working class. Romola Garai plays a never too indignant middle class suffragette whose husband won’t post bail for working women. (‘It’s my money – pay it.’)

You never get any sense from the film that Emmeline Pankhurst, a barrister’s wife whose own family had a background in radical politics, was broadly of the same class of the women that she inspired. As portrayed by Streep in two brief scenes, she comes across as grand, seen speaking from a balcony at a secret meeting. As biographies describe, she suffered as much as the women in the film, having been arrested and forcefed. What the film won’t tell you is that after women got the vote, she became a Conservative MP, partly out of a fear of Communism.

It is possible to read Suffragette as a feminist text where the protagonist, whose story is defined by their personal needs, is intentionally absent. So Mrs Watts is not intended to be a real character. Nor should we relate to her as such, even when she strikes back against her exploitative boss, who has a ‘fing’ for young girls. She is both present and absent from the narrative. This is a necessary, defining characteristic of feminist storytelling, to suggest there is another form of discourse outside of ‘conventional’ storytelling. It requires the viewer to ‘unlearn’ their habits of reception and learn new ones, like what that German bloke Bertolt Brecht went on about.

But Suffragette makes too many concessions to conventional movie-making, not least in the inappropriate score by Alexandre Desplat that applies a melodramatic gloss where one isn’t required. It’s like putting tomato sauce on a curry – you’re killing the flavour. So a viewer will feel confused and dissatisfied.

Which brings me back to the low audience numbers at the PictureHouse Central - the makers haven’t convinced a female audience that this film is for them. For that to happen, Suffragette needed to be a far more radical text.