52 Films Directed By Women: 27. A TALE OF LOVE AND DARKNESS (Director: Natalie Portman)

Recognising that she might never again get as good a role as Nina, the over-dedicated ballerina in Darren Aronofsky’s 2010 film, Black Swan, Natalie Hershlag, better known as Natalie Portman has turned to directing her own film adaptation of Amos Oz’s memoir, A Tale of Love and Darkness (original title: Sipur Al Ahava Ve Choshech).

It is Portman’s first feature as a director. She previously helmed a segment of New York, I Love You and the short film, Eve. Since winning the Best Actress Oscar for Black Swan, Portman has given birth, married, appeared in two Marvel superhero movies (Thor and Thor: The Dark World), segued into the mirthless comedies No Strings Attached and Your Highness and played the title character in the western Jane Got A Gun. She has also worked with the reclusive director Terrence Malick twice on Knight of Cups and Weightless. Portman is also one of the youngest women directors working today, benefiting from both her celebrity and her Jewish birth - she was born in Jerusalem in June 1981. A Tale of Love and Darkness is supported by the Israel Film Council. The average age of other female directors in this blog series is forty-four.

Just as Portman achieved her first directing gig early (as it were), she did everything else from a young age. She shot to fame aged just 13 as the young protégée of Leon in Luc Besson’s 1994 film (American readers know it as The Professional). She was the only star of the Star Wars prequels to emerge with her integrity fully intact – Hayden Christensen was particularly badly served by George Lucas – though arguably her double in The Phantom Menace, Keira Knightley did even better. She has just signed to appear in Annihilation, writer-director Alex Garland’s follow-up to Ex-Machina.

Amos Oz’s memoir A Tale of Love and Darkness was published in Hebrew in 2002 when the author was in his sixties. It describes young Amos growing up in British-mandated Jerusalem in the run up to Israel becoming an independent state in May 1948. The Arab-Israel War, or War of Independence followed.

The film is told from the point of view of young Amos (Amir Tessler) as he differentiates himself from his academic father. Arieh Oz (Gilad Kahana), a student of history and literature, has authored a short history of the novella, but the book does not turn out to be a best seller.

The film, which is part family drama, part reflection on Israeli history, is at its best in two sections. The first describes how Amos was loaned out to a childless couple and taken to a party given by an Arab. Amos is encouraged to be – and is – respectful, being told to play in the garden far from the house where adults are talking. Amos meets a girl sitting on a swing, and a younger child nearby. In the course of the encounter, Amos, who is influenced by the Tarzan stories that he reads, shakes the swing that results in an uncoupling that in turn injures one of the children. Amos’ parents are extremely apologetic and offer to meet the Arab family’s medical expenses.

The second section involves the family glued to the radio as they hear the vote in the United Nations for Israel to become an independent state. A number of Arab states oppose. America is in favour. Britain abstains. It is perhaps for the latter reason that the film has not been shown in the UK, a reminder of when Britain was on the wrong side of history.

The film it most reminded me of is John Boorman’s wartime memoir Hope and Glory. It has a similarly troubled mother figure, here played by Portman herself (as Fania Oz nee Mossman). Amos is bullied by is saved by his story telling prowess. At one point, he silences the bullies by describing how Tarzan spied on cowboys and Indians who were killing each other. ‘What happened?’ ‘I’ll tell you next time.’ Amos follows his mother as he leaves the house on mysterious errands. She witnesses Arieh with another woman. Amos also sees his father pleased that his book has sold out at the local bookshop and then notices the six copies hidden away by a family friend.

At one point we see a flock of crows filling the screen. They merge together into black. This is supposed to represent Fania’s mood - Amos’ mother committed suicide in 1952. We later see her slap herself in self-castigation.

The young Amos doesn’t want to be sensitive. Rather he is happier showing his physical prowess. With Israel’s existence decided by others, he is on the side of the doers.

A Tale of Love and Darkness doesn’t feel like a tale at all, rather a series of reminiscences that don’t add up to the formation of a sensibility per se, but rather show the various forces that shape one. Amos doesn’t learn from one person and put his learning into practice; A Tale of Love and Darkness is not that sort of story. It is almost the anti-biopic, about what we don’t know about a person rather than what we do.

Given that Portman was a child actor who discovered the world early through her work and then put her career on hold to study psychology, it is unsurprising that she should identify with a story told from a youngster’s point of view.  The film feels unapologetically not fully formed. Like Amos’ Tarzan story, we are left to fill in the gaps or at least to ponder why we know so little. 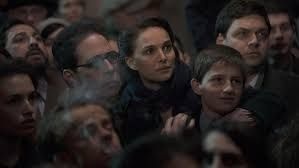 image credits: popsugar.com 1. Cinderela: When I was young, i was full of dreams, dreams to become a…

Pictured: Quad Poster of 'On Body and Soul' (director: Ildik Enyedi). Courtesy of Mubi On Body and S…