A review of 'The Bloat: the Desolation of Bloat.' Oh, wait, I mean the Hobbit, yeah... 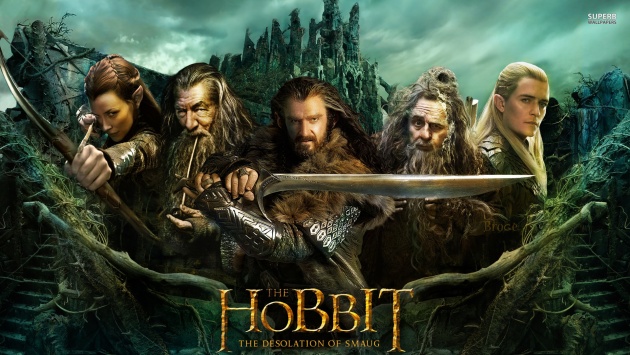 (An image of a  grouping of mostly old bearded things ((some with bird poop in their beards)) and then two shiny non-bearded things, those things being, so to say, elves.)

So this review here of the second Hobbit movie is late in coming and probably serves no more point than the proverbial beating of a dead horse, but whatever...I saw it a few weeks ago and have been digesting it ever since. Now I'd like to spit it out.

Why do I want to spit it out? Because it's all just so much bloat and blight and dippy add ons. I have been a huge fan of the Hobbit ever since I was a kid and my uncle introduced me to the Rankin Bass animated version with its delightful green and frog-like Gollum. I then read the entirety of Lord of the Rings in 4th grade. I was way too young to really understand any of it but I had a contest on with my friends to see who could finish the series first, and ah yes, I won that contest.

Then the first film trilogy came out and it was, all things considered, a pretty miraculous adaptation. I loved them and surprisingly to the uninitiated, so did a great majority of the movie-going audience!

But then a sad, though not too surprising thing happened, and that thing was the epic success of LOTR going to Peter jackson's head. After LOTR he went on to try to conquer his favorite film 'King Kong,' thus truly proving that classics should never be remade, and especially by those too close to the subject material. I remember waiting to see his Kong with college friends at the midnight premiere...Well 3 long hours later and we were dead bored, dead tired, and then had to walk across the Boston Commons in the dead of night to get back to our dorms. It was a dark time indeed.

So what did Peter Jackson do next? Well, I'll give him this: At least he tried to do something different....And that was an adaptation of 'The Lovely Bones' in which a young girl is molested, killed, and then narrates the rest of the story from heaven. Certainly this was a heavy theme that could have been rife with drama and emotion, possibly recalling Jackson's earlier and excellent film 'Heavenly Creatures (probably the best film he's ever made, at least from an emotional level),  but instead it ended up an awkward mish-mash and was still too full of overly bright and clearly CGI visuals of the girl's 'heaven.' At the time what I thought would have been more cool would be if the look of the girl's heaven had been all done practically and old fashioned, for since the film was a period piece set in the 70s, wouldn't it have made sense if the girl's personal vision of the afterlife reflected what she herself may have seen in films of the time, and not look like visuals out of a bloated 21st debacle? But...I digress....

So after two critical flops Jackson seemingly went crawling back to Middle Earth again. This time with Guillermo Del Toro. But that fell through (cutting a long story short here already everywhere online) so it was all up to him once more. But alas the magic window of time that had allowed the first trilogy to be made with such a beautiful mix of real world effects and digital had passed and now Jackson seemingly wanted more and more CG and BLOAT BLOAT BLOAT. As usual the casting was spot on (Martin Freeman as Bilbo seems almost as perfect as Martin Freeman as Arthur Dent, for instance), and getting to see Gandalf the Grey is a hoot (that's right i said it: a hoot) but...It's all so stretchedddddd ooooooouuuuuttttttt aaaaaaaaaaannnnd uneccessssssssarrryyyyyyyyyy. And that goes double for the 48 FPS brain warping debacle version. 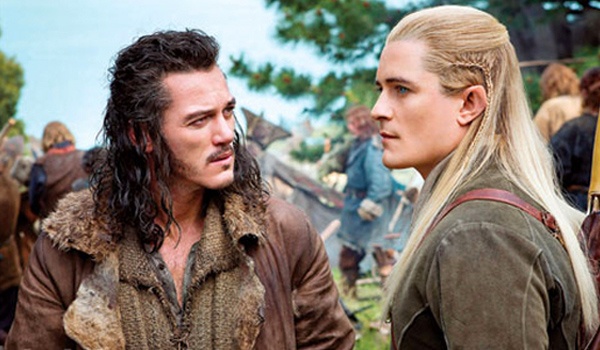 "Why are you back in this film?"

Now I know I said I would review the film and instead have rambled at length about Jackson's history as a whole, so my apologies. The hobbit: The Desolation of Smaug opens with a confusing prologue (because why start something that's a second film in media res to get it going, cause that'd be silly, right?) and then from there it barrels forward at a ridiculously brisk pace from one action scene to another all the while seeming slow due to it's long length. We get a new female elf character and the return of Legolas, cause teen girls ticket sales please, that's why, and we also get more wrinkly ol' CG orcs than you could shake a glowing sword at. You get a cool frozen ice town place which is nice and contains one of the only seemingly fully built interior sets (which is beautiful and gets all of but one scene in it) and what else? Oh lots of children screaming "DA! MA! DA!" Cause that's period authentic semi british sounding talk right?

Oh and there's some political intrigue and fish jokes and then of course when the town gets overrun with orcs all the HUNDREDS of people living in the town moments ago seem to vanish and not consider doing anything about the assault. But the dwarves get up to the mountain (but not all of them, for one is sick because Jackson loves making characters you know won't die...seemingly on the brink of death).....And then bilbo is clever cause he is and he goes inside and there's SMAUG DA BIG DRAGON. And boy, wow, he sure looks like a dragon huh. Never seen one of those before.

And more silly action happens and oh man I just can't do this anymore. You've all either seen this already or will never see it so I'll spare myself now before my fingers fall off.

But how howdy I'll sure see part 3 next year! Ha.

Charles Pieper is a stop motion animator, concept artist, director, editor and monster maker who lives in Los Angeles. He has made music videos for the bands Dufus, Summerbirds in the Cellar, Setting Sun, Quitzow, Brit and the Cavalry, Skidmore Fountain, Lo Fi Sugar, YesMisterBloodVessel, and Man's Assassination, Man. He…