An Open Letter to the President of the USA

The first chapter "Sign the Open Letter" is dedicated to AVAAZ's open letter to Donald J. Trump. You have the opportunity to sign that letter of protest if you like to do so.

The second chapter "Who Is Donald J. Trump" describes his personalty, his living situation and how the people experience him. There is also a discussion, if he is fit enough for being President of the United States of America. 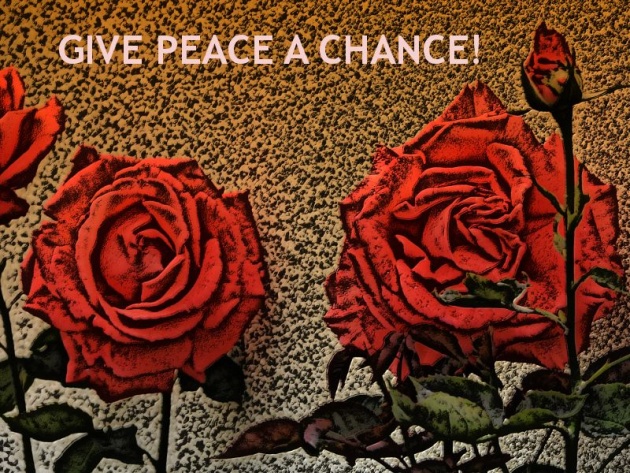 This blog is mirroring my personal opinion. If you don't agree, just don't buzz it. However, I am searching for people, who share my view of US politics and who will help to stop the worst developments.

This letter was signed more than 5 millions time since January 28, 2017. - AVVAZ

The world rejects your fear, hate-mongering, and bigotry. We reject your support for torture, your calls for murdering civilians, and your general encouragement of violence. We reject your denigration of women, Muslims, Mexicans, and millions of others who don’t look like you, talk like you, or pray to the same god as you.

Facing your fear we choose compassion. Hearing your despair we choose hope. Seeing your ignorance we choose understanding.

As citizens of the world, we stand united against your brand of division.

It is Avaaz, the campaigning community, which organizes this open letter and sends it to Donald J. Trump. Today, February 7, 2017, AVAAZ is still collecting signatures for this letter. The more people sign the letter, the more effective and powerful it is. The next goal is to get 5.5 millions signatures. 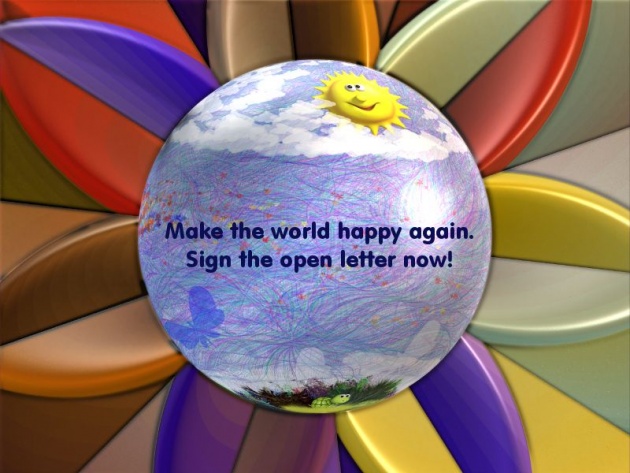 Photo Credit: @luckyhelper via bitLanders
Sign the open letter now. Please use the link above this image.

Who is Donald J. Trump?

Donald J. Trump and His Family

Donald J. Trump and his wife Melania annouced in November 2016 that the first lady and their son Barron would relocate to 1600 Pennsylvania Avenue in Washington (the White House) once Barron finished up his school year. However, family members say, Melania and Barron may never move to Washington and live aparat of the president. When asked, if he would not feel lonely, Donald J. Trump replied: "No, because I end up working longer. And that's OK."
Source: US Weekly

My Personal Opinion to the Living Situation of Donald J. Trump's Family

Do Melania and her son Barron not want to live in the White House because of all those protests? Or is it a protest by her against the politics of her husband or how she is treated by him? We will probably never know the answer.

Anyway, the president and his family living apart is unprecedented. America feels that a first lady not living in the White House and not doing her duty is an affront. A president's family living separated is unthinkable in a country like the USA, where family and religious values are highly appreciated and treasured. Another question arises: Does Donald J. Trump have the skills and is he fit enough to govern and rule the country? He is not even able to lead his family and to keep it together. This unparalleled and scandalous separation of the presidental family exposes Donald Trump to lack the appropriate empathy for being president. Donald J. Trump has made many people cry when his adminstration rolled out the immigration restrictions on Friday January 27, 2017 and implemented them entirely over-hasty.

What is Donald J. Trump's State of mind?

It may be that things are even worse. The world is vexed about the new presidents irritating working style and unrealistic perception. Some psychologists have started to question Donald J. Trump's state of mind. According to three leading professors of psychiatry from Harvard Medical School and the University of California, Donald J. Trump displays classic traits of "malignant narcissism" which is a mental illness.
Source: Independet from February 1, 2017 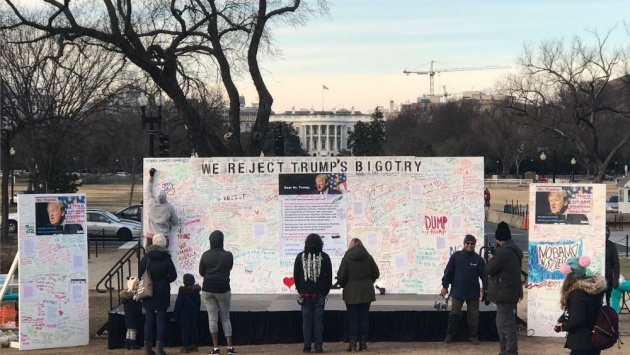 Photo provided by AVAAZ.
Promenaders are studing a billboard about the harmful politics of US President Donald J Trump in front of the White House.

How to Deal with a Narcistic President?

The below video is well worth to invest 4 minutes for watching it. Farron Cousins from The Ring of Fire explains precisely, how Donald J. Trump is thinking and what is his most important motivation. Based on Donald J. Trump's motivation, Farron Cousins shows in the video, how the president can be manipulated, if only the people stand together.

This video is from Ring of Fire's Youtube channel.
We can use Trump’s narcissism against him, if we stand together.

Signing AVAAZ's open letter to Donald J Trump is one small pebble stone in the worldwide endovers to sway Donald J. Trump's politics and to make the next four years a little more tolerable.

The worldwide protests against the politics of Donald J. Trump happen in various forms.

Most obviously are protest marches with thousands of protesters. Powerful protest marches have the potential for achieving poltical goals. The end of the war in Vietnam was the result of many, many peace marches worldwide in the 1970s. 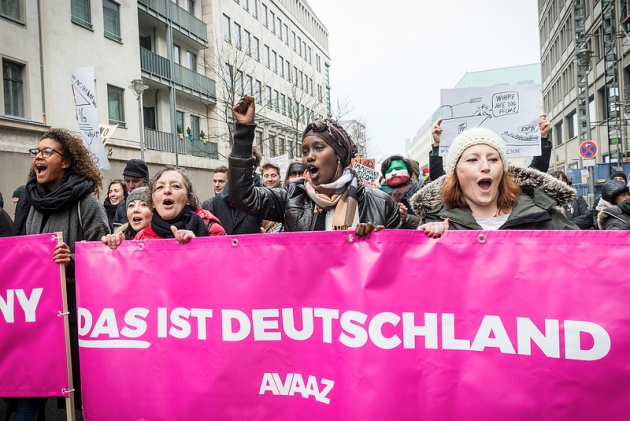 Open letters, like the one you are reading about right now, are a powerful way for getting the attention of leaders. Just have a look, what the international press is writing about this open letter from AVAAZ to Donald Trump. 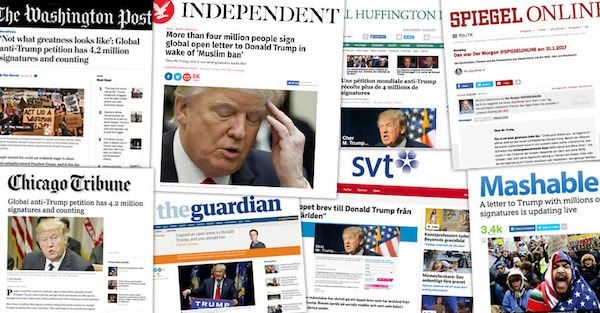 Image provided by AVAAZ
What newspapers are writing about this open letter to Donald Trump.. 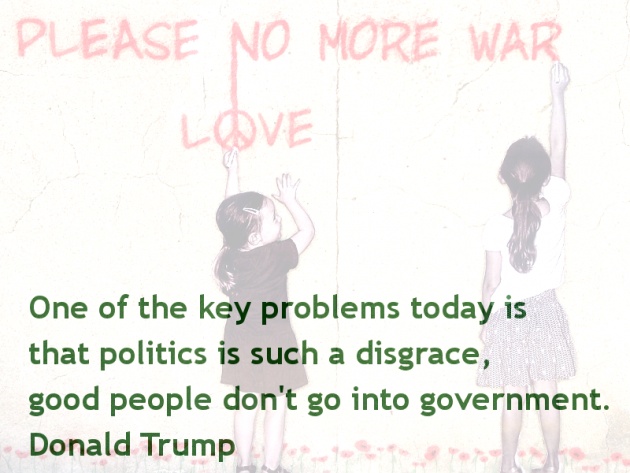 Hollywood stars boycotted Donald Trumps inauguration festivities and made their rejection of Donald Trump as president publicly visible. Donald Trump with all his money couldn't hire hollywood stars for the celebrations on his inauguration day. What a littling to be that much named and shamed! However, this boycott by the stars drew the attention of the people on the politics of the new president, on his hate speeches, and on his sweeping judgements and racism.

A boycott is directed against a policy and the institutions
which support that policy either actively or tacitly.
Its aim is not to reject, but to bring about change.
John Berger

What is the Difference Between Fake News and Satire?

There was once a time when the news in the media could be trusted and satire was clearly recognizable, because the story was too exaggerated and grotesque to be true. Satire targets absurd ideas and weak points of a person and mocks about them by the use of humor. Ridicule, derison and mockery are the resources satire is made off. In politically difficult times, like we live in nowadays, satire can become a weapon in the hands of the opposition and protesters.

This first example of a satirical article looks like a news article. However, the article is a typical fictious and satirical story, which targets the president's strange perception, his handling of the truth and "alternative facts".
Satire Article: PoliticalGarbbageChute 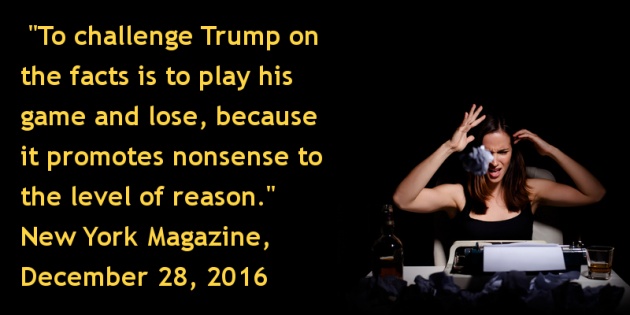 A satirical website with the name of trump Donald is harmless at first sight. Its URL may even make one think that it is an official website of the president of the USA. At second sight, the cartoon like image with his great blonde hair style and the trumpet gets our attention. If we move the mouse or touch the screen on a cellphone, the trumpet moves around his head, making the croaky sound of a toy trumpet and his hair is fluttering in the wind of the trumpet. Trumping him right in his face with that croaky sound is so ridiculous, childish and disrespectufl! This kind of website is destroying his authority and bringing his often kid-like behavior into derision. It is a strong weapon against his inhuman politics.

Turning the wall along the border of Mexico into ridicule

The wall along the border of Mexico is another highlight for satirists. One of the best satires is that fake IKEA ad for a ready-made, easy-to-assemble IKEA Börder Wåll. Nobody is supporting the idea of a border wall along the Mexican border. However, such a satire is part of the resistance against this stupid and foolish project. Satire has not only the purpose to entertain, but also to make the absurdity of such a project obvious. Bringing such an endeavor into ridicule is a powerful weapon against this wet idea. 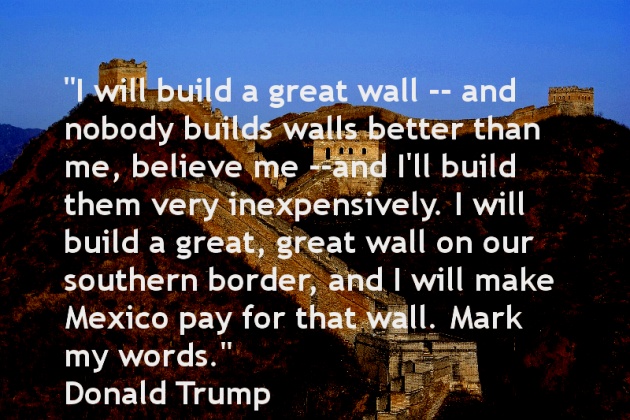 Satire in the post-truth era

However, today we live in the post-truth era and the real news itself often look like a satire. It has become difficult for the reader to distinguish between fake news and satire. Therefore, many media tag a satirical article on top with the word "SATIRE" for making it clear what kind of article the readers are consuming.
Click for an example of such a tagged satire article.

Fake news versus satire; and satire about satire

People, who spread fake news, often have an economic purpose to manipulate politics. What a satirist does, in the great tradition of humor, is poke fun at politics and the politicians. Sadly to say that Donald J. Trump's tweets are often fake news, just fictitious "alternative facts". The FBI started to publicly correct the worst lies (sorry, alternative facts) tweeted by the president. 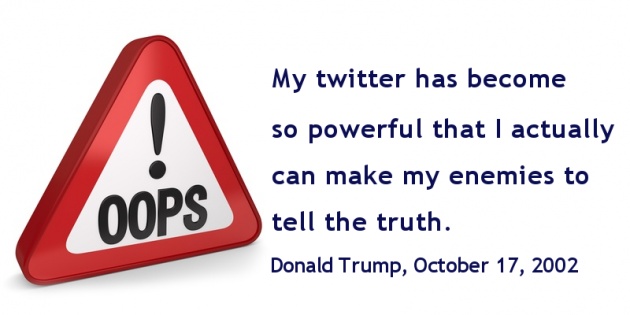 Collage created by @luckyhelper via bitLanders;
Background image is under the standard license of fotolia
Donald Trump's valuation about how powerful his tweets are.

The president's narcism is often the reason for such "alternative facts" in his tweets or remarks in his speeches. The perception of Donald Trump is sometimes just unreal. Of course, the unreal perception of Donald Trump is a deep forward pass for satirists worldwide. There are many satirical videos on Youtube similar to the "America first, Netherland Second" satire, which went viral. For many countries exist such a satirical video. What, if another satirist makes fun of those satirical videos? And mocks about the president at the same time?

Thank you for reading, watching and signing the open letter.

I wish for all of us a spendid, safe and peaceful future! 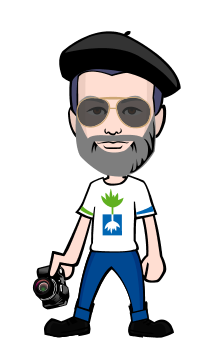 Fractal and digital artist, photographer and Blogger from Switzerland.