For countless people, there is nothing left of them after they pass on. Those who know them die and their memories fade. However, the art of ancient temples around the world preserves more than just the memories of souls whom the world has all but forgotten. The artwork is an invaluable look into their lives, their talents, and perhaps most importantly their beliefs. These beliefs were strong enough that they were recorded in breathtaking artwork and preserved for centuries.

In the 1950s, Rani-ki-Vav, a stepwell near Patan, Gukarat, was rediscovered after spending centuries abandoned and filled with mud, sand, and silt. As the stepwell filled, it covered the exquisite carvings that had been a monumental part of the temple and preserved them from the elements. The riverbed that originally supplied the stepwell continued to shift and today it’s non-functional as a well but provides a breathtaking example of early art and architecture.

Recently named a World Heritage Site, Rani-ki-Vav—also known as the Queen’s Stepwell—was built sometime between 1022 and 1063 by Queen Udayamati as a memorial to her late husband, Bhimdev I. The design is a fascinating one; it was built not only as a memorial but also to honor the life-giving water. As such, it’s essentially a temple built upside-down. Seven levels of stairs lead down to the water ultimately leading down to a well that’s about 30 meters (98 ft) deep.

Throughout the temple, there are more than 500 major sculptures and more than 1,000 smaller ones. Countless frescoes adorn the walls with many reinforcing the precious nature of water in a land that had little. Many more are religious in nature and depict deities from religion, mythology, and folklore, telling stories and showing key moments from famous tales. There are also references to literary works that would have been contemporary works when the temple was built. It served as an elegant memorial, beautiful temple, and place for social gatherings.

2. Benedictine Convent Of Saint John At Mustair in Switzerland 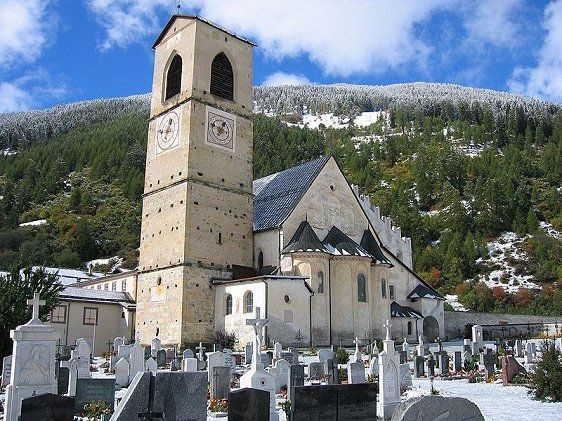 The Benedictine Convent of Saint John at Mustair was built around 800 and sits in one of Switzerland’s seemingly infinite picturesque valleys. It was founded at the request of Charlemagne and passed to the Benedictines at the beginning of the ninth century, becoming a convent in 1163.

It’s also the site of some of the only artwork we have from the Carolingian period. The paintings were originally created when the site was built, and they were painted over in a remodel that was done around 1200. It was only relatively recently that newer additions to the building—like the Gothic ceiling and the tragically whitewashed walls—were removed to reveal the series of frescoes underneath.

The site, which had been built to honor Saint John the Baptist, had been painted with a series of scenes that told the story of Christ. Their discovery also helped to fill in some gaps in the history of the evolution of Christian themes and symbols. With Carolingian artwork sorely lacking, the discovery of the severely damaged paintings helped art and religious historians understand how key moments in Christian lore like the Last Judgment had evolved. 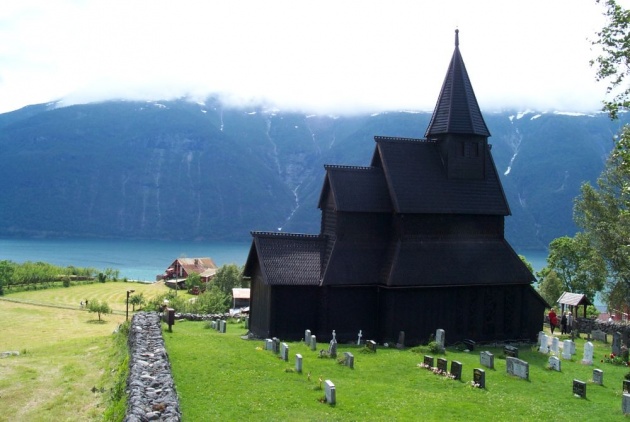 Stave churches were once seen across northwestern Europe, but now only a handful remain. Urnes Stave Church, built in the 1100s and sitting on the western coast of Norway, is one of the oldest and best preserved examples of these massive wooden basilicas. Stave churches are built with all the elements of Romanesque architecture—massive columns, impressive arches, and intricate carvings. The difference is that the stave church is made entirely of wood which makes it particularly vulnerable to the elements and the wear and tear of time.

The church is decorated with a series of intricate wooden carvings; many show animals interlaced in an abstract knot work pattern that bring together Viking tradition and Celtic artwork with the relative newcomer to the area Christianity. The church was built only a handful of decades after Christianity was introduced to Norway between 1016 and 1030. The earliest pieces of the church were from trees felled in 1100. There have been a number of remodels and restorations done to the building over the years, but much of the artwork like the carved wooden panels has been preserved.

On the inside, there are a number of paintings from a renovation that took place in 1601 when the interior of the building was modified and the choir extended. The church is still in occasional use and many of the items used date back to the Middle Ages, including a sculpted wooden pulpit and images of Christ, the Virgin Mary, and Saint John carved into a rood beam.

Taken from the article of Debra Kelly.

-All credits to Debra Kelly and listverse.com-