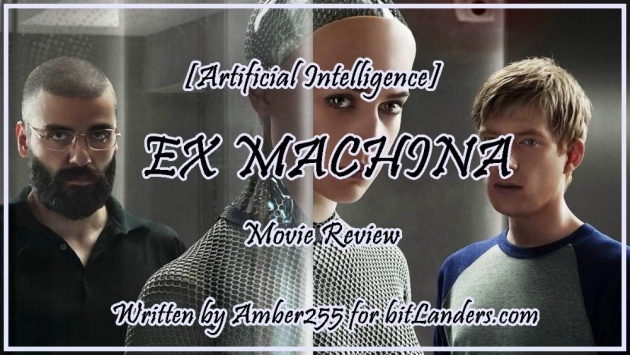 [Artificial Intelligence] EX MACHINA: Is AI Capable To Think Like A Human? - Photo credit: scienceonscreen, edition by Amber255 via bitLanders

I can’t say that I understand people complaining about the decline of the science fiction genre. In my opinion, it’s obvious that we are approaching the golden age of movie sci-fi. Of course, cinema can still turn the wrong way, but now sci-fi cinema feels really good.

Computer special effects are becoming more sophisticated and, more importantly, more affordable. Now, in order to shoot a picture with convincingly looking robots, monsters or laser raptors, you do not need a huge budget, even amateurs can cope with this.

The rise of this sub-genre is understandable - as never before we came close to creating if not a real AI, then at least to the point in history when we have to seriously think about this topic.

One way or another, with science fiction - entertaining, serious, studio and amateur, full-length and short, cinematic and television, everything is in order, and I will definitely write a separate article about everything valuable that has appeared in the sci-fi genre in recent years, so that show it more clearly.

Ex Machina is a smart, slow-burning and fascinating sci-fi thriller that deals with themes of sexuality, humanity and morality against a truly luscious backdrop.

Films that touch on the topic of artificial intelligence, or even put it at the center of the narration, also become more and more every year.

The debut film of a fan of more or less science fiction, screenwriter, and writer Alex Garland vividly stated his potential and thought a little about the future, moreover, in the human tones. Amateur psychology of characters in a confined space, measured, calm use of visual effects, the minimum number of cheap tricks to win the audience.

Amateur psychology of characters in a confined space, measured, calm use of visual effects, the minimum number of cheap tricks to win the audience. The film EX MACHINA raises important questions for the modern world and society related to how far new technologies will enter the lives of ordinary people.

What EX MACHINA is all about?

In EX MACHINA, Alex Garland tells the chamber story of three heroes - the artificial intelligence of Ava (Alicia Wikander), its eccentric creator (Oscar Isaac) and the young programmer who will get to know the robot and render a verdict in the Turing test - does this creature have real consciousness, or is it just a program that failed to come to life and become aware of itself.

The main fears associated with the Garland film were that EX MACHINA, like many films before it, would turn into an ordinary scarecrow about the rebellion of robots or slide into other cliches and cheap twists.

The film can’t do without completely familiar turns, but they don’t drag the whole film onto themselves; the film turns out to be much more thoughtful and deep than just another fantasy about how anyone and the sexy robot girl created by him quarreled.

Probably, and with a large share, the director wanted to show the viewer the horror that a person might encounter on the threshold of opening an AI identical to his own. Identical - means indistinguishable from the human, the same living and figurative, capable of lies and manipulations, lengthy thoughts and stubbornness. Horror means an indescribable fear of the unknown, the fear that your creation may turn out to be such unknown.

Yes, the game of three actors in a limited space was able to create an integral colorful story. As part of an experiment on the type of Turing test, the hero Caleb is introduced to the artificially created girl Ava, where his goal is to make out whether her intellect is genuine.

The experiment is complicated because he sees in her a real person, she gets his trust and sympathy.

Will Ava be able to hold out among the people, because she will face completely 'non-laboratory' tests for adaptation to humanity: the world of people will also test her. You can be like a man, but to become a man - no! It is social behavior that is the hallmark of a person. In such a situation, another question arises: do we need the robots world, is a man not ergonomic in comparison with them?

Check my new Querlo chat for more info about EX MACHINA and about these topics:

I invite you to chat with me about EX MACHINA (link opens chat in a full-screen mode):

It seems that this is an illusion, the whole thing is in control: having lost it, we immediately lose the status of the Creator and most of all harm ourselves.

How do you know if Ava can win, and humanity can lose? In social, behavioral terms, you can’t know everything or calculate in advance; the android is not a psychologist, but a learning brain. Errors in the program, lack of personal social history and deep behavioral skills - this can attract attention or arouse suspicion.

Wearing a dress does not mean behaving properly! There is something that you can’t teach, that has absorbed into us with mother’s milk, and that cannot be translated into the language of logic and numbers. We are people, and this is the main thing!

If earlier fantastic works described AI as a kind of abstract concept that seemed to people a fascinating fantasy, but no more. Now we are talking with Siri and Cortana, we use complex search algorithms, we are preparing to transfer to unmanned vehicles and look at cool cybernetic prostheses and impressive mechanical dogs. We are close. 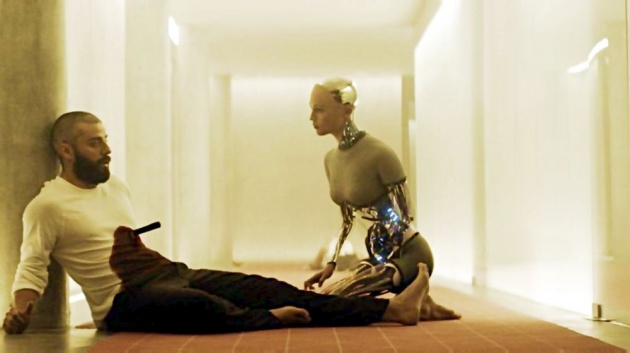 EX MACHINA may become not the ideal film on this subject, but at least it manages to remain that very one - real, serious science fiction that does not slip into a mess with other genres like action or horror and says something new about the nature of artificial consciousness.

EX MACHINA is an amazing, interesting, visually beautiful film, with a special atmosphere and deep meaning that sounds like a warning to humanity: when playing gods, do not be too careless!