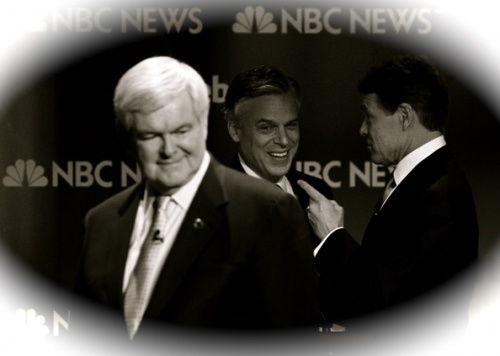 Surprising Rick Santorum’s failure (See Latest Poll #’s below) to capture the support of the Christian conservative vote, but even more is perhaps Newt Gingrich’s rise, mostly at Rick Perry’s and Santorum’s expense. Now that Rick Perry has dropped out, Gingrich will probably gain most of that vote which is looking at any alternative but Mitt Romney and Ron Paul. The Christian Right dislikes Ron Paul’s libertarian and non-interventionist policies. This bloc is not anti-government as much as they want strong authority and military in line with their philosophy, which has little to do with turning the other cheek. (Read - 'Just War Principles" Espoused by St. Augustine & Ron Paul - www.filmannex.com/posts/blog_show_post/election-for-christian-americas-soul-by-ambassador-mo/43449) Mitt Romney, they just neither like or particularly trust. The Christian Right that dominates much of the South Carolina Republican electorate is not at all committed to the Republican establishment backed Romney and will be placed in very unhinging dilemma if they are asked to vote for him in November as the Republican nominee. They are anxiously seeking the alternative. When the more moderate John Huntsman dropped out, this only raised the alarm on the right as Mitt Romney gained much of those voters. That Rick Perry, whose base also included the Christian Right, has endorsed Newt Gingrich is indicative of a crumbling of cohesion around Rick Santorum. So why has not Santorum held the advantage that he appeared to gain in Iowa? Rick Santorum gained the backing most of the leaders of the Christian right who were anxious to coalesce around one candidate. Read – “Rick Santorum-Will This Man be America’s Next President?” -http://diplomaticallyincorrect.org/films/blog_post/will-this-man-be-americas-next-president-rick-santorum-by-ambassador-mo/43235. Newt Gingrich may have to some degree a geographical advantage being from next door Georgia. However, I think it is more than that. While Santorum probably has more defined, perhaps extreme positions favored by the Christian Right, Gingrich has the sharper tongue. For some time the US Presidential election has been cast in harsh rhetoric, and much of the Republican base is drawn to the sharper saber tongue to draw blood in November even if ideology or rationality might favor Santorum or Romney. Of course, Newt Gingrich should be underestimated for his prowess as candidate. If it is the sharp tongue that wins the primary wars, then why not the election – at least that is what many core right Republicans think. The real risk though has been all along of Newt Gingrich wounding himself and the Republican Party establishment with all his swashbuckling. However, I must admit that I had pronounced Newt stuck, bleeding and dead prematurely, although that was before a high-grade infusion of Super PAC money. As we anticipated only a few days earlier, “There Will be (Republican) Blood in South Carolina” - diplomaticallyincorrect.org/films/blog_post/there-will-be-republican-blood-south-carolinas-new-civil-war-by-ambassador-mo/43599 South Carolina Republican Poll Just Prior to Rick Perry Exit: Mitt Romney – 37% Newt Gingrich – 30% Ron Paul – 11% Rick Santorum – 10% Rick Perry – 4% Undecided – 8% By Ambassador Muhamed Sacirbey      Facebook Become a Fan at “Diplomatically Incorrect”    Twitter – Follow at DiplomaticallyX      FOLLOW Mo on Twitter - diplomaticallyincorrect.org/