Right from the Champions League draw for the round of last 16 it had been said that the two top contests would be between Premier League against La Liga and Premier League against Bundesliga. Manchester City had been put against the mighty giants Barcelona, Two of the biggest clubs that are also top clubs for respective domestic leagues as well. 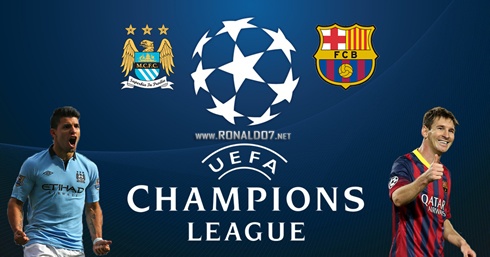 The contest was branded to be the real tests for both the clubs and the winner would be one of the favorites to cash in a spot at Lisbon. The show was charming enough to catch anyone’s attention so as there was no need to produce much of hype. The other big match was Bayern Munich against Arsenal two of the biggest football giant of Europe going head to head. The first leg of the two-legged contest between Barcelona and Manchester City was to be played in Manchester at Etihad Stadium the castle of Manchester City, where they have only lost once in all season. Barcelona was on a bad run recently but has been getting better and better with their performances with the return of Lionel Messi, while Manchester City have scored all season for fun. 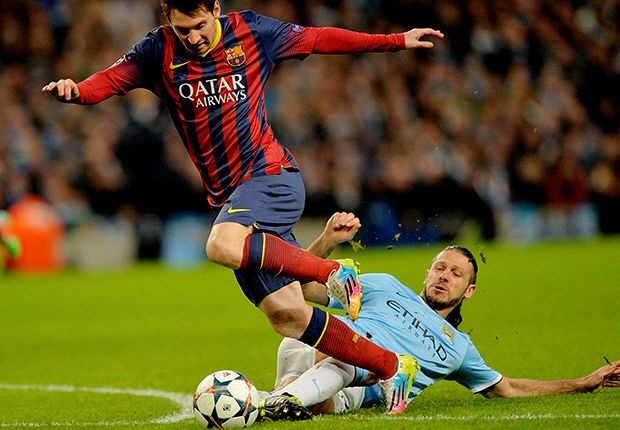 Match started on a chilly night in Etihad Stadium with Manchester City as slight favorites going into the match, the team was full of stars including Alvaro Negredo, Yaya Toure, David Silva and other star players, while in the opposing side Barcelona was led by obviously the magician Lionel Messi, Neymar and other top players. Manchester City chose to play 4-2-3-1 formation to fight against possession loving team, Manuel Pellegrini going for heavy deployment in the midfield to stop the possession if there is. While Barcelona lined up it their typical formation but their defense has been concern all season, this match was expected to have goals in it and seeing Manchester City’s record all season it was expected they would score atleast 2 times in the match. At start, we saw David Silva troubling Barcelona’s defense with his movement behind the lone striker. But the first clear cut chance was for Barcelona, Negredo on the other hand showed his strength and power against the likes of Victor Valdes and Mascherano. The match ran till the half time and there was some real stroke of genius missing from the match, at half time the scores were 0-0 but in the second half Barcelona taken the lead through Messi from Spot Kick and taking control of the match. 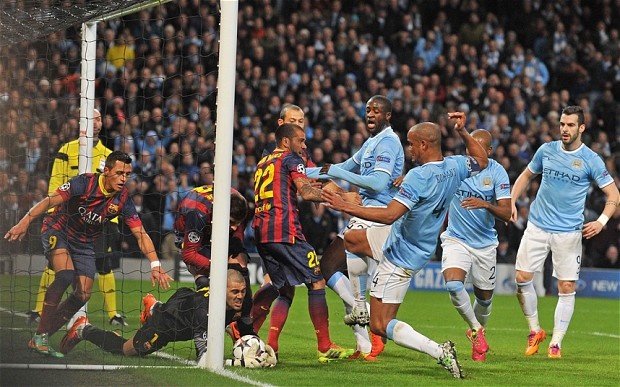 Upto that point the match was in balance but after that Barcelona taken control of the match and Manchester City become overpowered by the quality of the opposite side. Barcelona slowly started to gain control of the match and that ended in Barcelona scoring the second from a good work by Daniel Alves to run from the full back position and going into the penalty area of City and scoring a great goal. I had already written in my previous blog (click here) that Manchester City’s first time appearance in the final stages of the Champions League is a negative point for them. The point proved right and Manchester City was unable to answer the experience of Barcelona in Champions League. Before the match it was expected that Manchester City will hit the net atleast twice but the opposite happened and Manchester City was unable to score for once. With the match ending 2-0 Barcelona has reinstated their favorite tag for the Champions League final spot and also showed their strength and power is still unparalleled by the biggest sides of Europe. Manchester City’s all claims have been put into bed and there were one sided  fans singing at the end of the match and were from Barcelona. Although they were shaky in the match at some points but their win at England’s top side and winning against a side who were favorites at home showed the overall quality and strength of the team. Looking at the result here the contest is almost decided and without a major setback and disastrous performance Barcelona will move into the next stage of the competition. The things are getting better for Barcelona while going into the last stages of the competition and the season, leading in domestic league they are showing that they are still the team to beat. 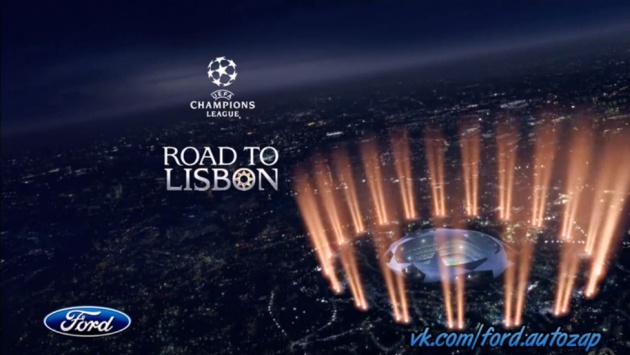