It was Monday and I took the first two classes of the day. After the Physics class, the third class was yet to be confirmed so my class fellows told me of going to the canteen. I agreed on going but then I remembered that I had a little work to complete. I had to submit a form for my cousin’s degree. The examination center was on ten minutes walk so I asked a friend to drop me there because I cannot drive. He along with two others agreed on going with me. I’m a loner but today I needed my friends.

We got into the car and in a minute we were there. I asked them to stay outside of the office, go to the canteen eat something and I will join them in 5 minutes because the form had pictures of my cousin attached and I did not want them to see it. Is not it irony, we can stare at someone’s else cousin, making them uncomfortable but we cannot digest the stares other passes at our own cousins. Not just cousins other family members too.

Took me five minutes to find my friends when I got back because they choose to eat a low-quality “samosa chaat” from a low-quality cart outside the university than to eat good quality food inside.

When I joined them they were talking to a guy from another department. He was a senior. I could see them and I guessed from their body language that the discussion was a bit intense. I rushed.

- Senior Guy:Look, it's a piece of cake.

(They were all laughing and giggling)

(passing Vulgar looks at each other )

- Senior: message her ,hey what's up.

- Senior: If she replies than ask her for a whatsapp , and that you don't use messenger much and you are all set.

-Senior: try another one if you are ignored by one.

They were talking about girls. He told us about how he was bored of having affairs. He said something like that he is the admin of an fb group named CENSORED and that he hooks up 2-3 girls every day. He even gave my friend the link of the group. He mentioned how his class fellows beg of him to hook them up also. It's not that I was not interested. I was interested but I was judging the look in his eyes and the tone he was talking in. Have you ever looked at someone when he is proud of something that he has done and he feels out of the world? Considers himself superior over others because he has something that others don’t. He had that tone and that look when he was talking to us.

What’s the point of writing this?

To be very honest, even I don’t know why am I writing this but I did not see any shame, any regrets when he was talking. He felt kind of proud on sharing the manual for hooking girls, sharing his stories and experiences. My friend tried to annoy him by telling him that he can hack into his account and get all his chats and his account deleted. Have you seen Sharks on National GeoGraphics? There are small fishes companying the shark. When the shark hunts and eats, the leftovers are eaten by the small fishes. He also had the small fish to accompany him and he said,” No you can’t hack it, even if you do it will not make any difference because he has all of them on WhatsApp “.

This might sound stupid but all of those who are in any sort of relationship, ask your partner that will he allow his sister to talk to another guy?

Just like your family does not allow you to talk to boys, he won’t allow it also.

Aye, but you still talk.

And aye, his will also.

Nobody is loyal today. When you start a relationship with someone. It may be a relationship for you but remember you are just another bait for your partner and his friends and he will feel proud of sharing you in public - Haram Relationships to be precise 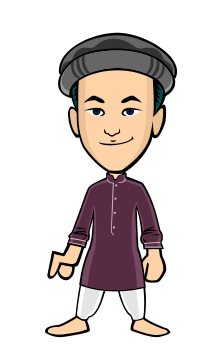