Big shoes to fill for Louis 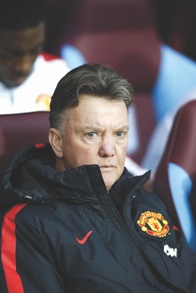 Louis van Gaal has revealed he feels under pressure to succeed at Manchester United to repay the generous support of Old Trafford legend Alex Ferguson.

Ferguson has given his backing to van Gaal in recent interviews, claiming the United manager can restore the team to the lofty levels which Ferguson himself attained in his 27 years as boss.

Certainly, van Gaal's efforts in leading United into a top three position as the Premier League enters the Christmas period have been impressive and generated an air of optimism at the club not felt since Ferguson retired in 2013.

However, that backing has come at a cost, according to van Gaal.

"It's fantastic," said van Gaal on Tuesday. "When you come to Manchester United, because I know Sir Alex, you hope that he will support you.

"And when he is supporting you, he is doing that not only this week but in other conferences he gave.

"He showed a lot of confidence and belief in me and you need that as a trainer-coach, as manager of Manchester United.

"You need that belief and support of managers like Sir Alex. I am very happy with that because then you can work more easily.

"But it's also pressure because he believes in you and that gives you that pressure that you have to get results. It's not so easy to win Premier League matches."

United, unbeaten in seven games, open their festive fixture list with a home clash against Newcastle on Friday and van Gaal insists he has already succeeded in one of his primary aims - making Old Trafford a venue where other teams fear to play.

Since losing at home to Swansea on the opening day of the season, in his first competitive match in charge, United have won seven and drawn one of their eight games.

"I have said after the first loss against Swansea that it's a pity we came back from the United States and won everything and then lost our first match in the Premier League," said van Gaal.

"We want to build a fortress at Old Trafford and we have made that already because we have won a lot.

"I'm happy with that but then we have to continue because seven (wins) is too few I think.

"So we have to continue and that's the most difficult point because it's not easy to win games in the Premier League."

The England forward played in a deep midfield role in last weekend's 1-1 draw at Aston Villa but van Gaal does not accept that Rooney's days as a goal threat are behind him.

"Wayne is a player who can play in different positions and I like that because I like multi-functional players, that's why I can use him as a midfielder, also as a striker and an attacking midfielder," he said.

"The last game he was more defensive midfielder. I like that he is also coming into the 18 yard box because he can score goals.

"He has the ability to run from box to box and that is also a little bit that he has to 'feel' in a match - read the match - and he can do this.

"But that's a matter of time and he can do that. I like him closer to their area than our own goal."