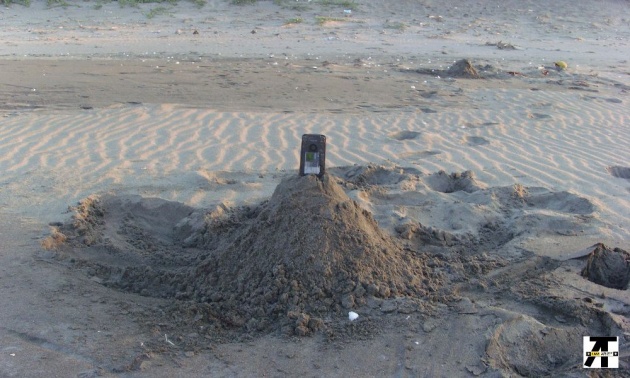 The picture above is a picture of my friend's phone.  No, it's not a funeral for the phone, rather the sand was used as a tripod for us to be able to have a group shot.  I don't know if you can see the phone though.  This beach where the photo was taken is located in Buguey, Cagayan.

Read more about that there here in this blog : Sta. Ana, Cagayan

Now, the video below is a clip from the video one of my friend took during our stay in Buguey.  As I mentioned in my blog above, my friend's place is in between fresh water and the sea.  These fishes and eels were caught in the fresh water side.

Me and my friends had fun interviewing the old fisherman who was preparing his catch.  We acted like kids, innocent and knows nothing.  Asking this and that just for fun.  The old man was game and patient with us "kids."

It's not clear in the video what were the mentioned names of the fish.  I had to change the original audio to another song to give it a more upbeat feel to it.

Just a few meters from the old fisherman's house was a well.  This other video was my friend's take of the song "Reflection," the soundtrack of the movie Mulan, singing it with gusto into the well.  That spontaneous moment made it funny so we had a good laugh about it.  Moments like these don't come by often.  Sometimes in life, you just have to go with the flow especially when you are having good times with friends.

How would you rate his voice?  Should he be out the well or in the well?

Thinking back, this was five years ago but it it still fresh in my mind.  Thank goodness for technology.  We can keep parts of memories through pictures and videos.

Hello dear bitlanders, I would like to share the experience from my last trip to the historical city…