How To Earn in bitlanders Without Spamming

Every now and then micky-the-slanted-salerno encourages bitlanders members to write a specific theme for their blogs.  Two weeks ago, he posted about Web TV.  You can read about that blog here.  These Web TVs are available online and you can watch online films, documentaries, etc. created by independent filmmakers.  Creating these themed blogs and submitting them for review will give you a chance of earning more here in bitlanders.

Check out the FAQs and check out the guidelines you should follow in writing a blog and submitting a blog or any content such as video and gallery for review.  The foremost is that your contents should be original and not plagiarized.  This also helps in your creativity so get creative!

In my previous blog, I talked about independent film and some thoughts on the other Web TV that bitlanders developed such as Documentaty, Stories on the Web, Animaty and Suspensaty.  Check out the blog here.

These Web TVs are part of MTI USA, Inc.  This is a company established in 1995 and based in New York City.  MTI USA, Inc. is one of the frontrunners in the progress of online film and video distribution helping thousands of independent filmmakers.

In this blog, I will be talking about Silentyarn and Comediaty.

These Web TV channels that bitlanders created follow a certain theme.  From its name Silentyarn alone, there is already the idea of silent films.  That is what Silentyarn is all about.  It features silent films and movies.

One such film is The Night Before Christmas.

This movie was created in 1905.  It is an American silent film directed by Edwin S. Porter.  He made this film for the Edison Manufacturing Company, a company established by Thomas Edison in 1889.  This is based from the poem of Clement Clark Moore entitled A Visit From St. Nicholas or more popularly known as Twas the Night Before Christmas.

The movie starts with Santa Claus feeding reindeers.  He then prepared toys in his workshop.  The film went on based on the poem Twas the Night Before Christmas.  Some verses were also shown in the film.   This is the very first film based on that poem.  At least 1,600 feet of film was shot and around 700 feet was used in making this film.

Harry Eytinge played the role of Santa Claus in this film.  He was born in Pennsylvania and died in New York.  Some of his works include The Old Fire House and The Hair Restorer and the Indians.  Check out his other films here.

Another version of Twas the Night Before Christmas was released in 1974.  This was an animated film.

Another animated movie was made in 1968 entitled The Night Before Christmas. 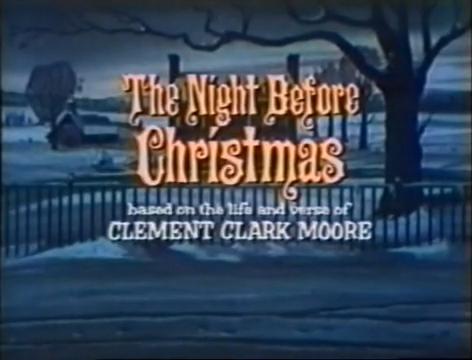 Other works of Edwin S. Porter include:

The Great Train Robbery.  This is the first western film ever made and it was created in 1903.

The Life of an American Fireman

Here is a short film about the legacy of Edwin S. Porter.

A Trip to the Moon (Georges Méliès)

A Trip to the Moon or Le Voyage dans la Lune is one of the films featured in Silentyarn.

For a full description of the movie, check out this link.  This is said to be based from Jules Verne's From Earth to the Moon and Around the Moon.  This film is about astronomers who traveled to the moon and explored it.  While on the surface of the moon, they encountered lunar people called Selenites who captured them but the astronomers were able to escape and fly back to Earth bringing with them a Selenite captive.

This film was created by Georges Jean Melies.

He was a Frenchman born in 1861.  As an illusionist, he combined that in his filmmaking techniques.  Because of that, he is known as the first Cinemagician.  He got that name because he was one of the first users of  multiple exposures, time-lapse photography, dissolves, and hand-painted color.

Other films of Georges-Melies include:

The Box (A Silent Movie)

Another film featured in Silentyarn is The Box.  It is a story about zombies and the undead.  The movie stars Nick Robinson and Ross Gibson.  This film was created by Kel Webster and Kelly Jones.

You can email Silentyarn and send to fr@Silent Yarn.com.  You can also write them at:

Comediaty shows comedy films and animations.  You can watch short films from independent filmmakers and/or renown directors.  This is also part of MTI USA, Inc. Connect 4 is a short film by Andy Parker.  It's a film of a lady enjoying a Sunday afternoon broken by an illusive opponent.

Other videos of Andy Parker found on Vimeo include:

Rush shot using Canon 5d Mark ii and Canon 7D.  You can see here the tilt-effect or the miniature effect.  This makes the buildings or whatever is shot look like from miniature structures.

Canada is a film from still photographs.

Snowflakes in the Forest

Check out his other videos on Vimeo.

Another movie found in Comediaty is Rubbish by Amy Allen and Lisa Denny.  Check out the video below also found in Vimeo.

First Day is a video by Anderson West also found in Vimeo.

Harry Bozino is another director featured at Comediaty.  He studied at Ecole Supérieur de réalisation Audiovisuelle of Paris and one year in New York.  Some of his short films were selected in festivals and gained several awards.

Below is his short film It Was Nice Meeting You that is also found in Vimeo.  This was filmed in New York  City.

Other movies of Harry Bozino found in Vimeo include:

For more information about Comediaty, you can email them at fr@Comediaty.com or write them at