Bones - The Secret in the Service 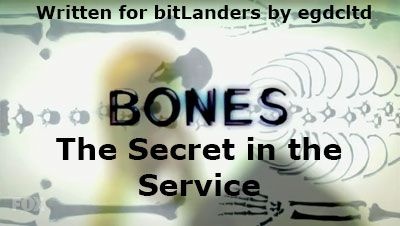 "The Secret in the Service" is episode seventeen of season eleven of Bones, the forensic drama television series loosely based on the novels and life of anthropologist Kathy Reichs. In this episode, the leader of the Secret Service tactical team is found murdered shortly before the president's visit to an area.

This Is Not a Prank Call

The episode opens at night in some woods and a man holding a beer can in one hand is calling 911 with the other. He tells the 911 operator that he's called Darrell and he stopped in the woods to urinate and that he thinks he's found a dead body. The operator tells him that making prank calls is a felony but Darrell insists it's not a prank. So the operator wants him to look at the body again, which he doesn't want to do. Darrell does anyway, and said body is fizzing. He tells the operator that it looks like it's in acid or something, and that he needs another drink. The operator asks Darrell to please not have another, as it sounds like he's had enough. Than Darrell hears a noise and says that he thinks the killer might still be around. There are a couple of feet in boots nearby. When Darrell stands up, he is hit in the face with a shovel. That probably hurt. 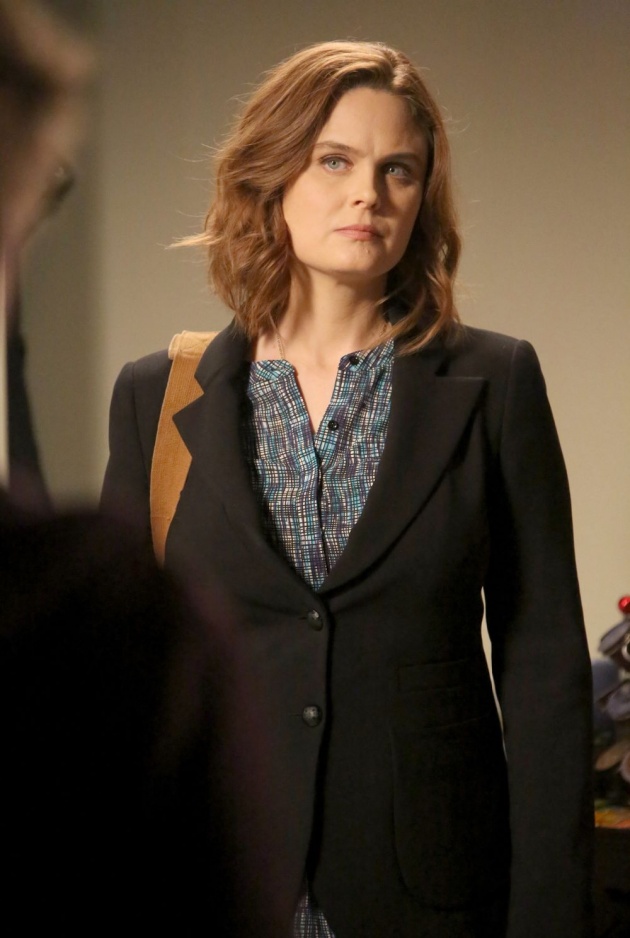 If Brennan is Sick, Booth Should Be Too

Booth asks Brennan why she's out of bed in the middle of the night as she's sick. She tells him that she needs to make a herbal remedy, one that Booth really doesn't like the smell of. Brennan asks Booth if he's okay, and he tells her he's fine. Which annoys Brennan; she says that Booth should be sick too, as his diet is abhorrent - all he eats is meat, cheese and bread. Booth tells her she forgot the sugar and alcohol. Booth then gets a message about the body, but tells Brennan that he's going to let Aubrey deal with it whilst he takes care of her.

The Witness is Less than Useful

Aubrey is at the Jeffersonian, saying to Cam that he heard they have a witness. Cam tells him not really, as he was pretty intoxicated. According to Darrell, he was attacked by two masked assailants who swung matching shovels at his head at the same time. The remains are in a body bag on the platform and Cam asks Aubrey to grab a zipper. He asks if they aren't going to wait for Brennan, but Cam tells him that Brennan is home, sick. When Aubrey gets a look at the remains he says he knows how she feels.

The body was doused in acid but Hodgins says the local PD neutralised it with baking soda. Cam says that there are no internal organs, but she does find an electronics device. Which Aubrey identifies as a wrist microphone clip, government issue. Of a type used by the Secret Service. Hodgins asks Aubrey if he's serious. Then a group of sober-looking people in dark suits enter the lab. Yes, looks like Aubrey was serious. 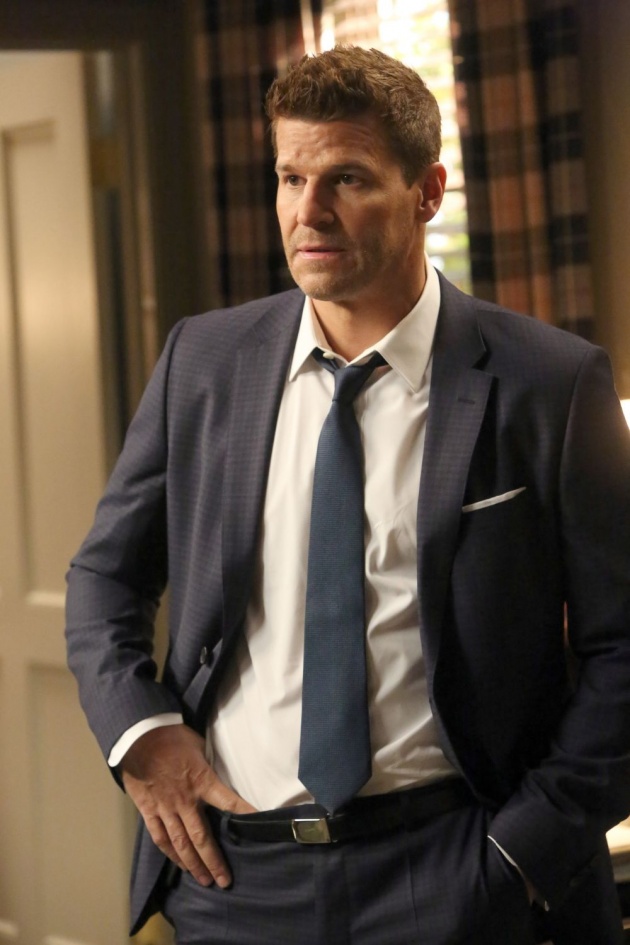 When Booth gets in, Aubrey introduces him to Agent Walker, the only active Secret Service agent to take a bullet for a president. Walker says that the victim is Graham Roberts, the head of his tactical team. Roberts sent Walker a text message the previous night saying that they needed to talk, but never answered Walker's response. The president is doing a campaign fundraiser in the area in 36 hours, which is why Roberts was so far afield. Aubrey says that they need to dig into Roberts' personal life, to insure that wasn't why he was killed, but Walker responds that he needs clearance from on high first. Booth tells him that Aubrey is fine, but it's actually Booth they are concerned with. Or, rather, his heritage - because they aren't sure if they want a descendant of John Wilkes Booth working the case. Because, after all, killing presidents is genetic. This connection annoys Booth at the best of times.

Fisher is On Loan to Help

Brennan is still at home in bed viewing the body via a camera and her laptop. It seems that the Secret Service are also sending a forensic anthropologist to assist, and Brennan wants to know who could possibly be better than her. The person is Mr, now Dr, Fisher. Angela says they haven't seen him in years; Fisher says that he's on loan from another organisation, but can't say who - it's classified. Angela manages to guess by the end of the episode anyway. Brennan tells Fisher that he wasted his time, because she's confident that she will be in soon as she's feeling better. Going by the coughing fit, that clearly isn't true and Fisher comments that Brennan's discharge shows she's still contagious. 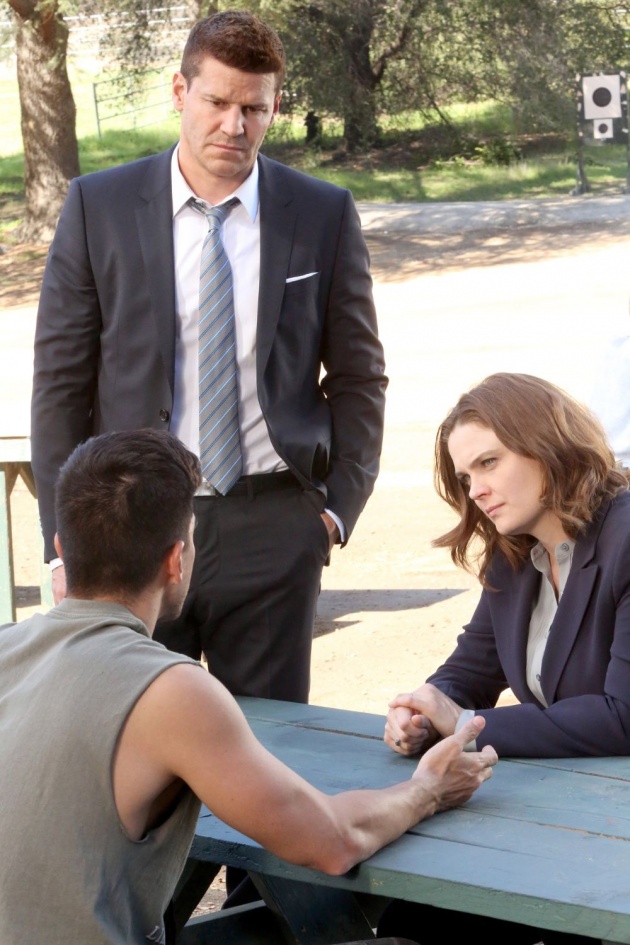 According to Walker, the tactical team investigates all credible threats to the president within a 100 mile radius. Roberts had met with each personally, so there's a good chance he spoke to someone who not only killed him but also plans to try and kill the president.

Fine: Apart from the Pain, Misery and Self-Loathing

At the lab, Fisher goes and sees Hodgins and asks how he's doing; apart from the pain, misery and self-loathing, fine. All things in which Fisher is well versed. Hodgins says that the victim showed signs of fertiliser and an acid used to clean garden furniture, suggesting that the killer was involved in landscaping. The last person to see Roberts alive was one of the threats who tweeted that someone needed to shoot the president so that he will be tortured in hell for all eternity. However, this suspect is physically incapable of swinging a shovel, so didn't knock Darrell out. So he's probably not the killer. Roberts also showed signs of having fallen from a great height. 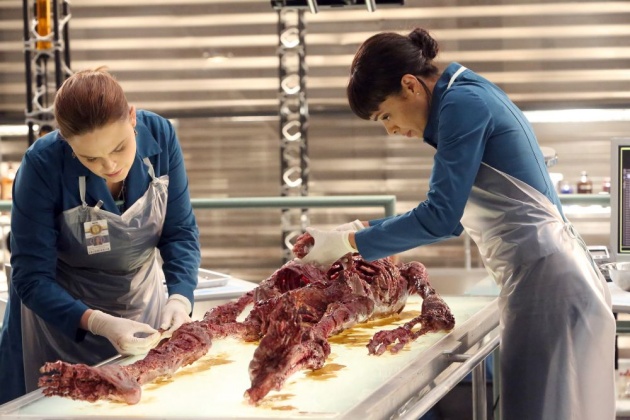 It Looks as if a Professional Did It

Booth is finally given the go ahead to be on the case and tells Walker they have a bigger problem. Before Roberts was killed, he was shot in the sternum, although this was stopped by his vest. Booth tells Walker that 9 out of 10 untrained shooters go for the head; the fact that the killer went for centre mass showed that he's a professional. Brennan, who clearly isn't better - but she's no longer contagious - shows up at Booth's office. She wants to help, but there's still a risk of her contaminating evidence at the lab. Then evidence is found that suggest Roberts was killed by another Secret Service agent. Which causes quite a lot of tension. 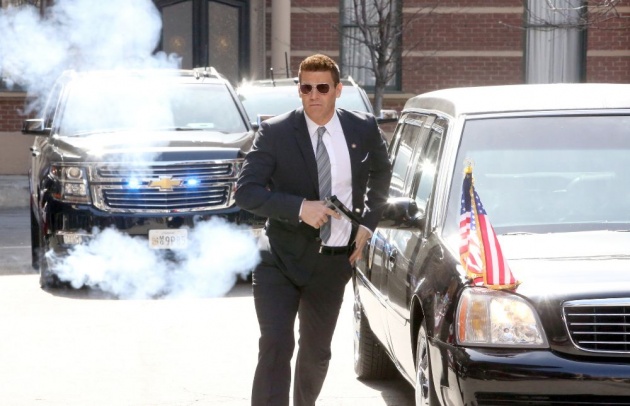 Not an Ideal Situation

So, the president is heading into the area very shortly and it looks like the Secret Service may have been compromised. No pressure then.

Bones - The Secret in the Service Promotional Photos

Bones - The Final Chapter: The Grief and the Girl

Image Credit: Fox via Wikipedia "The Final Chapter: The Grief and the Girl" is episode eight of seas…