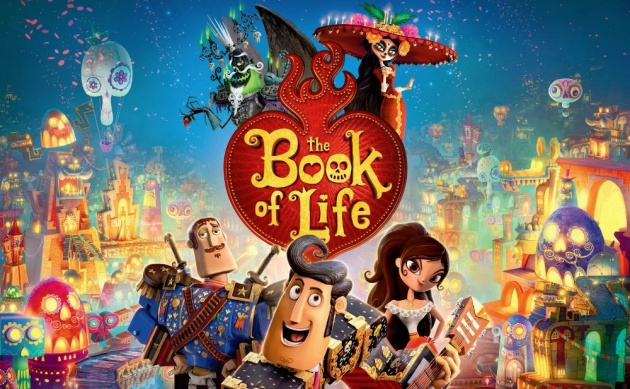 Nowadays, animated films are not just intended for the young ones but also for the adults. I personally don't watch too much films nowadays which I regret because I used to watch movies specially animated ones but because of work and other stuffs which I become busy about, I tend to lessen time for watching movies. I do have a series which I am consistently following but then I also have a limited time for those. It seems like the things that I am doing lately had been taking much of my time.

But there's an exception to this because my brother in law had recommended one specific animated movie which he said is a must watch. Coincidentally, my colleagues had already downloaded the said movie and all I had to do was to copy the file from the office's download server. Glad the copy was clear and on high definition.

After watching the movie, I can conclude that this is a must watch movie and something which I can certainly recommend to others.

The animated movie was about the life of the three main characters, Manolo, Joaquin and Maria. These three characters lived in a town of Mexico called San Angel. They were friends ever since they were young and the two boys had already interest in Maria even when they were still young.

During the Day of the Dead (Día de los Muertos), La Muerte, the ruler of the Land of the Remembered and Xibalba, her wife, the ruler of the Land of the Forgotten made a specific bet of these three kids. La Muerte bet that Manolo will marry Maria while Xibalba bet for Joaquin but later on cheated by giving the boy the Medal of Everlasting Life which then gives Joaquin power where he won't be hurt or won't be defeated by anyone.

Because of an incident where Maria had freed some pigs of their neighbors which were about to be butchered, her father, General Ramiro Posada let her go to a far place to study on how to become a true lady leaving both her best friends, Manolo and Joaquin. However, Manolo was able to leave Maria with a piglet and Maria also left Manolo with a guitar which has an engraved phrase "always play from the heart". Joaquin on the other hand was left with Maria's hat.

The time came when Maria returned back to the town, a bullfighting event was held to welcome her back with of which Manolo's first bullfight as well. Manolo's family are bullfighters and he was expected to be the same as well but he has a heart of a musician and don't want to really kill the bull. Manolo, although was able to defeat the bull didn't kill him which dismayed his father but then had impressed Maria.

Manolo then confessed his love to Maria when they met at dawn but he was tricked by Xibalba and Maria was bitten by the two headed snake which took her to a deep sleep but Manolo thought she is dead so he let the two headed snake also bit him which in turn killed him that time.

Then he went on to search for the La Muerte at the Land of the Forgotten but later met the Candle Maker who has the Book of Life. He then saw that Manolo's story is blank can be rewritten by Manolo himself, Candle Maker then took Manolo and his family to the Land of the Forgotten where they found La Muerte and explained what had really happened. La Muerte then learned that Xibalba cheated her which caused her to negotiate one more time with Xibalba. Manolo eventually won the bet which Xibalba set and had made Manolo together with his family returned to the living world.

While Manolo was away, Maria learned about his death and later on agreed to marry Joaquin but the enemy of their town had returned, Chakal who was in search for the Medal of Everlasting Life. Gladly, Manolo came back and it was a coincidence because his family were also raised and got to fight the entire army of Chakal. Manolo was almost killed when Chakal placed a bomb but was saved by the Medal of Everlasting Life after Joaquin pins it on him.

Everything went back to normal in the town of San Angel and the Medal was returned to Xibalba later on. Manolo and Maria then got married happily while keeping their friendship with Joaquin.

The truth is I didn't expect it to be that beautiful when I first came to learn about the movie. I thought it would be all about books or a specific life which was biographed and I never had expected it to give me an entertaining time.

Believe me or not but I had been recommending the movie to my friends and family members too specially to those who have kids. It is a beautiful animation showing off the Mexican traditions and ancient mythology which we as Filipinos are able to relate specially the traditions because the Philippines had been colonized by the Spaniards before for 300 years and so I believe that the Mexicans and Spaniards do have identical traditions.

And I would like to stress out that my favorite character of the movie is La Muerte because her dress, her hat and everything in her was really stunning. Her poise and her soft side makes her look like a queen.

The visual art was really stunning and very impressive because of its bright colors of their dresses and the Land of the Remembered looked like a party place due to the wonderful colors and designs of the balloons, the location and the impressively nice designs. Kudos to the digital artist who made the animation really beautifully stunning. It has been a colorful place of joy and revelry.

Also, I would need to commend the darker side of the animation. Although there were evil-ish side because of Xibalba being in the Land of the Forgotten where there were demonic skulls and bones and looks like it was all about a sad and demonic place, this didn't take the part of the movie being a fun and bright one. So if someone who have watched it would try to recall, they would probably remember the brighter and colorful side instead of the dark one.

Lessons of the Movie

I am listing down some of the important lessons which I had learned from the animation. This is not just for the adult ones to learn from but most specially to the young viewers which I personally believe can help them with their lives too.

~ THE VALUE OF FRIENDSHIP ~

While Manolo and Joaquin were contending for Maria's heart, they remained friends. This is a good lesson to learn from specially to those teenagers who thinks that if you become rivals for a specific girl, your friendship would then drift away.

What's good about the story was that even after Maria choose Manolo, their friendship stayed and even became stronger.

It's great to see a movie which gives importance to pursue what your heart desires. Manolo's family carries the bullfighters even way way before and his father had expected him to be one a well. However, Manolo made it clear and firm that he won't be killing any bull at all as his dream is to become an artist, a musician.

He is indeed good with the red cape and distracting the bull but he'd rather play the guitar and sing than killing it. His father had disown him because of that but later on, Manolo gained back his father's trust and respect.

Note as well that Manolo willingly gives up his life for the sole purpose of pursuing the love of his life into the afterlife. This is something which can be really a good lesson to the viewers.

Elements of the Movie

Día de los Muertos - is a celebration or a Mexican holiday which is some kind of magic as it commemorates the spirits of the departed loved ones who returns to earth to receive gifts and remembrances from their still living family members.

Xibalba - The Ruler of the Land of the Forgotten was derived from the Mayan term for the realm of the dead.

Ending Song - the song entitled "No Matter Where You Are" have been my favorite even before I have watched the movie which made me really surprised when I heard it in the ending part of the movie.The song is composed and sang by the real life couple, Us The Duo.

And as I had mentioned earlier, the animated movie is a recommendable film, something which kids and adults will both enjoy. It involves friendship, love, bravery, unity and traditional aspects as well as the godly realm.

I would rate it 9/10 as there's no such thing as perfect in this world. And let me end this review by borrowing what La Muerte said:

Movie SPIDER-MAN: INTO THE SPIDER-VERSE Review: The Best Animated Film Project Of 2018