Phantoms (1998) is sort of an oddity. It’s got a good cast, good production values, and atmosphere to spare. But, for some reason, it never quite gets it right.

Let’s backtrack a bit and explain how this movie came to be.

After his book Whispers hit it big in 1980, Dean Koontz, now considered one of the world’s best-selling authors, was asked to write another best-seller. His publisher advised that his next book should be a horror novel, since they were all the rage at the time. Koontz, who doesn’t consider himself a “horror writer” per se, reluctantly agreed, mostly due to financial reasons. The result was Phantoms, published in 1983. It was a hell of a book. Moody, intelligent, with well-drawn characters, and Satan as the villain. The book became a huge bestseller when it came out in paperback.

Fast forward 15 years later, and Dimension Studios (the company behind the Scream, Hellraiser, and Children of The Corn franchises) decided to turn Phantoms into a movie. The result was Phantoms (1998), starring Joanna Going, Ben Affleck, Rose McGowan, and Peter O'Toole.

Phantoms (1998), more or less, retains the basic story of its source material, with a few subtractions and a couple of major changes. The concept remains the same: the entire population of a small town suddenly disappears into thin air. Menacing shadow creatures begin to emerge out of the dark, toying with the handful of people who stumble upon the mystery. An expert on mass disappearances is called in, and he claims that the entity behind the mayhem is an ancient, seemingly omnipotent being, that maybe Satan himself.

What is different about the movie version is that the story has been streamlined (or dumbed down), with the rich scientific background found in the novel basically removed. As for the characters, again, they have been streamlined and simplified, losing most of their dimensions. The one pleasant surprise in this version is Dr. Timothy Flyte, a character that was basically fodder for the creature in the book. In the movie, and in the hands of Peter O’Toole, the character of Dr. Flyte saves the film, as O’Toole’s portrayal is delivered with verve and a wry sense of humor, which turns the character into some of sort of a modern Van Helsing with a worldly bent.

The script, by Koontz, also features some witty moments, as in the 15 years since the original book was published, Koontz had matured as a writer, and the screenplay feels more like one of his novels published in the late nineties: slick, laced with humor, and designed to thrill.

But despite the endearing performances, the eerie atmosphere (thanks to director Joe Chapelle's stylish handling of the material), and the satisfying ending (which, I might add, is superior to the ending featured in the original novel), the film has one too many cringe-worthy moments, ultimately preventing it from rising above its B-movie trappings.

So, Phantoms (1998) is what it is: an entertaining, stylish b-movie, with a few things to offer. But after watching the movie version, do yourself a favor and pick up a copy of the novel. You won’t be disappointed. 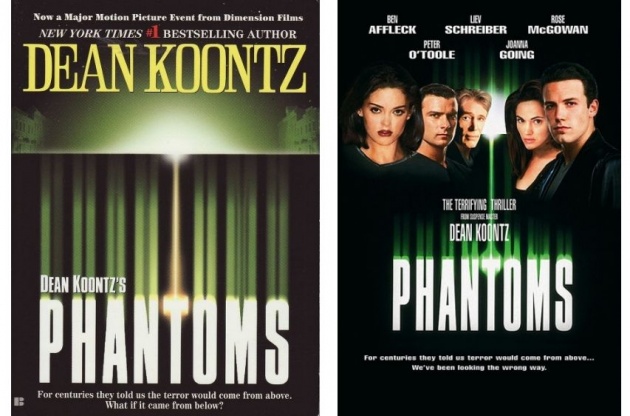