Bookcrossing: Swap your books and let them travel! 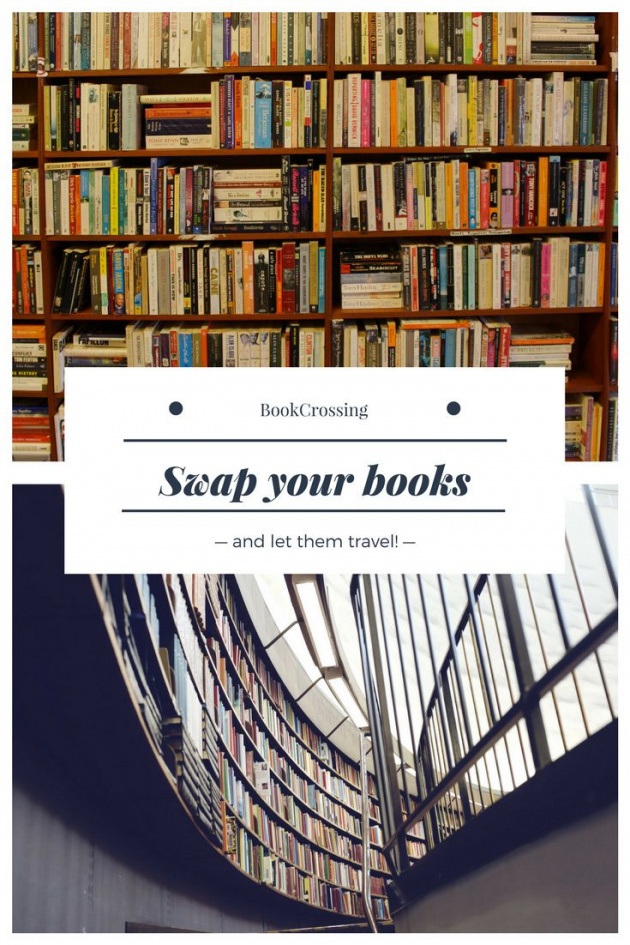 Image credits: Photos by terimakasih0 and Unsplash via Canva.com

Bookcrossing (whether the website itself, or the concept in general) is nothing new, but I had never gotten interested in it before the past few months, when I had to reevaluate my owning so many books.

See, I love books, and I love owning them, but when you're moving abroad or throughout the whole country on a regular basis, and most of the money you spend is just to move your books, let's say that owning a lot of them isn't so appealing anymore. Kindle and other ebooks, here I come!

A few months ago, when I retrieved my books out of storage (which cost money, again), I realised how many I had (too many for my new flat), and that I had to let them go. Or some of them, at least. But I didn't want to just throw them away (oh the horror). I wasn't sure the local library would take them all, and I also wanted to know what would happen to my beloved books. 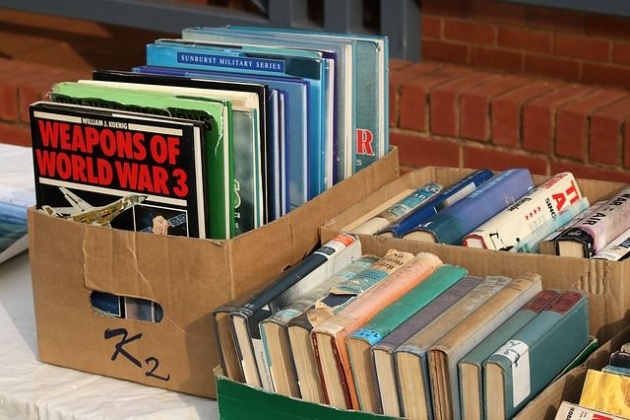 Image credits: Collection of books by Bluesnap via Pixabay.com

This is when I remembered the concept of swapping books by leaving them in unknown places, and I went looking for a website that would allow me to do just that. This is how I came to discover Bookcrossing.com.

BookCrossing (also BC, BCing or BXing) is defined as "the practice of leaving a book in a public place to be picked up and read by others, who then do likewise." The term is derived from bookcrossing.com, a free online book club which was founded to encourage the practice, aiming to "make the whole world a library."
— Bookcrossing, via Wikipedia.org

Bookcrossing consists in letting your books go, by leaving them in public places for other people to pick them up and read them. Of course, you can do this without having to be part of a system, but said system allows people notify you when they found your books, and so you know that the latter have found a new home.

This is done thanks to a label you glue inside the book. First, you need to register the book on Bookcrossing; when it's done, the book is given a code, that you can write down on the label. The next person to pick it up can then go to the website, input the code, and leave a note stating they have found your book. Rinse and repeat.

Label. Share. Follow. Breath new life into books instead of letting your old favorites collect dust - pass them along to another reader. Our online archival and tracking system allows members to connect with other readers, journal and review literature and trade and follow their books as lives are changed through “reading and releasing”.
— From Bookcrossing.com

This is exactly the kind of idea I love. Would my books be better off at the public library? Probably, if the library indeed makes use of them, or at least donates them to a charity shop. Will my books be found? I don't know, and that's part of the appeal: it's all a little mysterious. You have to relinquish control, and while it scared me at first, it then felt very liberating. Sometimes, you have to learn to let go; this is as good a method as another. 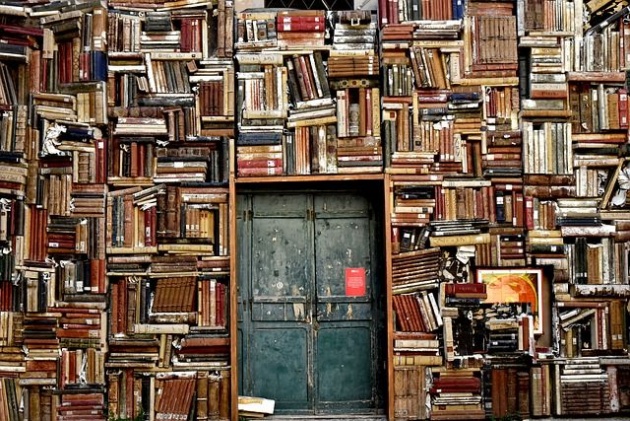 Where can I leave my books?

You can play it safe and leave the books in known places. For instance, one thing I've seen in the United Kingdom, and not in France, are little free libraries (LFLs), which tend to pop up here and there. There's one in a mall close to my place, and due to a city initiative a few years ago, some people have even been allowed to build some in their gardens, for passers-by to take and drop books! LFLs are like an actual library, except just in any place: a shelter in a public park, a repurposed old phone booth, and so on; just check them, see if there's any book you like, take the book, and bring it back later—this book, or another, it doesn't matter. 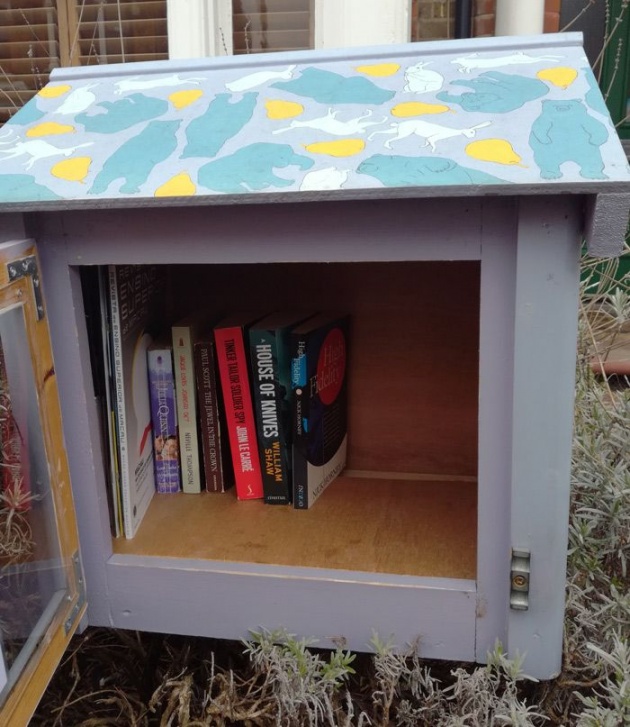 Image credits: A personal LFL in Walthamstow by Naotalba via bitLanders.com

Other places where I've dropped books are pubs: some of them have actual bookshelves that fit the same purpose, and the bartenders will happily let you take books and leave some. A book I left in a local pub even ended up in Italy! 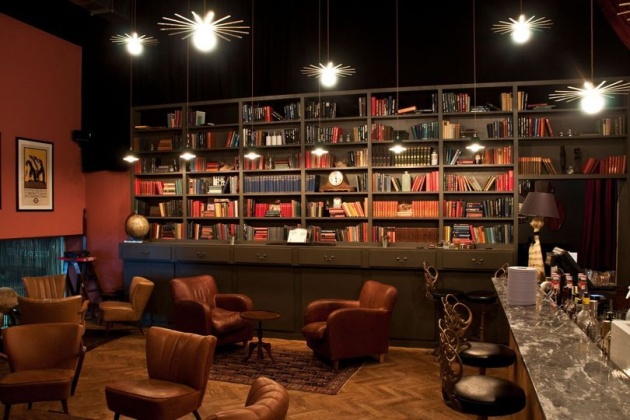 The Bookcrossing wiki also maintains a list of OBCZ (Official BookCrossing Zones), that you can browse to find places that officially partake in the movement.

Sometimes both are combined: there are some OCBZ pubs in my city.

Finally, if you're feeling adventurous, you can wrap your books in airtight zipper storage bags (to protect them from the rain), and leave them on benches, on window sills, suspended to hand rails, and so on. Be creative! 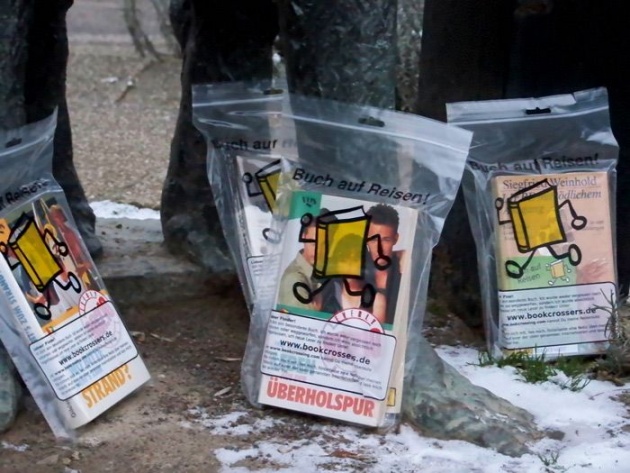 All of those are called wild releases, but the latter kind is of course more random.

Another way is to give your books directly, hand to hand, to someone you know. (Make them promise they'll leave a comment on the Bookcrossing website!)

I've done this at meetings, for instance. It's a surer ways of knowing where your books are going. 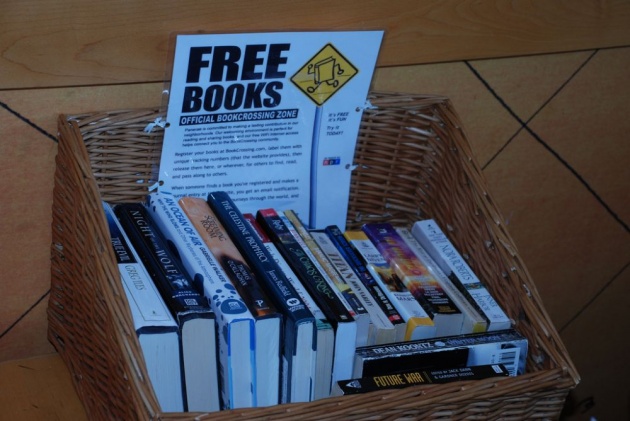 Where shouldn't I leave my books?

Public places with security checks are usually a no-go. Airports and railway stations, for instance, are usually wary about 'abandoned luggage', in case said luggage might contain explosives. People have reported books being picked up by security, and then disposed of a few hours later, even though it was obvious they were just books, because of the place's standard procedure.

Places that are dangerous to go to are also something I can't recommend either, for your own safety as well as for the safety of someone who may see your book and want to pick it up.

The Bookcrossing website isn't just a place to register your book and print labels: it also has forums where you can post and discuss with other Bookcrossers, and even meet some in your own town—or in other towns, if you're willing to travel.

Once a year, a global convention is held (the next one will possibly be in Australia), and local groups also organise their own meetings. I attended one where I live, and even though I didn't have time to go to April's bookcrossing day, I now know that it's a thing, and I can prepare for it next year.

There's a Facebook group as well—more than one, as evidenced by the Irish and Greek groups I found as well, and not just on FB, but that's the one I'm part of at the moment.

Here are the pros and cons I've found about this system. Feel free to let me know about your own experience with Bookcrossing, if you're also a member.

- It's not as heartbreaking as just throwing away your books! (Yes, I've known people who do that.) 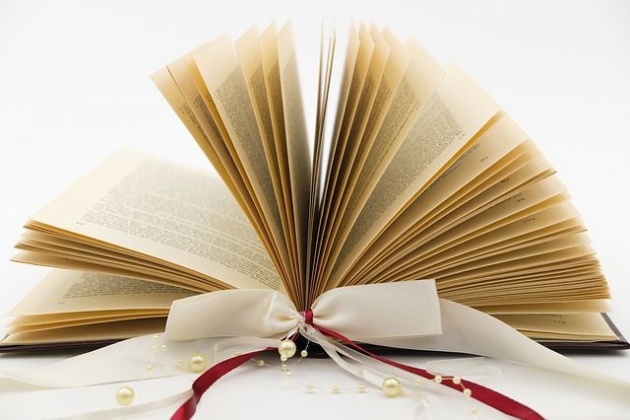 - You don't have to register! Well, you have, if you want to track your own releases, however people who find your books can leave anonymous comments, which is a definite plus: not everyone wants to register to a gazillion websites.

- Books don't sell well. If you have a complete collection of a long series, you can probably sell it on eBay, sure; but just the one volume is more hassle to try and sell, and you probably won't be able to sell it for more than the shipping fees to send it. So you might as well release it.

- You're being part of a community. You don't have to do this in your corner: you can go to official meetings, as well as organise your own, or simply post on the BC forums.

- It takes time. An enjoyable time, in a way, especially if you like making your own labels. Still, when you have more than just a couple of books you want to send to the Great Unknown, you can easily find yourself spending hours on registering and labelling. On the other hand, when it's done, it's done.

- There's no guarantee someone will find your book, or notify you about it. I've been lucky in that regard, in that I got a few 'catches' in my first couple of weeks, yet be ready to be disappointed. 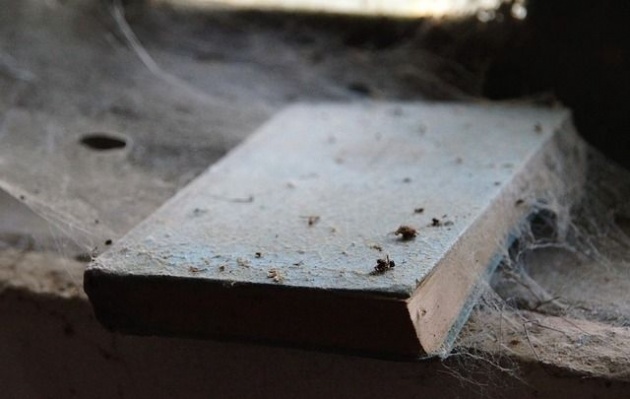 'The ugly' is probably the website itself, which feels very... dated, to say the least. I love the principles of Bookcrossing.com, but I'd really like it to get a revamp, and sooner than later. It doesn't entirely remind me of my first days of discovering internet, when I used Netscape Navigator to go on Altavista... but it's not far from it.

In spite of the website's appearance and the potential mishaps, bookcrossing is nonetheless fun: it gives your books a second chance while decluttering your home; you get to discover places where to leave books; and you get to meet new people, too!

Watch this video for testimonies about Bookcrossing, and examples of releases: