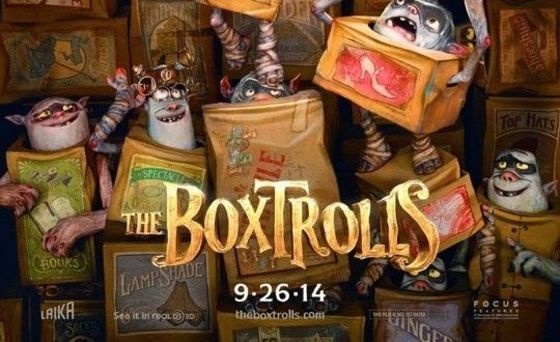 Worlds Collide In New Trailer And Poster For The Boxtrolls

With just two feature films, Laika Studios has become one of the leading animation houses in Hollywood – critically speaking, at least. Coraline and Paranorman didn’t exactly blow up the box office, collectively grossing about $137 million, but they did manage to push the boundaries of stop-motion animation and add a bit of much-needed ingenuity and heart into the world of animated film. They’ve also pushed the envelope from a technical standpoint, as Coraline was the first stop-motion animated film to be shot in 3D, while Paranorman became the first stop-motion film to use a 3D color printer to create its characters.

Luckily for us, Laika is back with a third feature, due out this fall, called The Boxtrolls. The marketing for the film has already shown us the ins and outs of the story, but Moviefone has released a new trailer that introduces us to the various trolls living under Cheesebridge and shows off the film’s quirky visuals and humor.

The story centers around an orphaned human boy named Eggs (voiced by Game of Thrones’ Isaac Hempstead-Wright), who ventures above ground to investigate a plot enacted by Archibald Snatcher (Sir Ben Kingsley) to destroy the Boxtrolls. There, he meets a feisty human girl named Winnie (Elle Fanning) and discovers that he’s not actually a box troll.

Directed by Graham Annable and Anthony Stacchi, The Boxtrolls opens in theaters on September 26th, 2014. Aside from Hempstead-Wright, Fanning, and Kingsley, the film sports a fantastic supporting voice cast that includes Simon Pegg, Nick Frost, Toni Collette, Jared Harris, Richard Ayoade, and Tracy Morgan. You can check out the wonderful new trailer below, followed by a new poster and the film’s synopsis.

LAIKA’s third film is The Boxtrolls, based on Alan Snow’s bestselling novel Here Be Monsters. Introducing audiences to a new breed of family – The Boxtrolls, a community of quirky, mischievous creatures who have lovingly raised an orphaned human boy named Eggs (voiced by Isaac Hempstead-Wright) in the amazing cavernous home they’ve built beneath the streets of Cheesebridge. When the town’s villain, Archibald Snatcher (Academy Award® winner Ben Kingsley), comes up with a plot to get rid of the Boxtrolls, Eggs decides to venture above ground, “into the light,” where he meets and teams up with fabulously feisty Winnie (Elle Fanning). Together, these soft-boiled detectives uncover the hidden connections in Eggs’ past and devise a daring plan to save his unique family

I love this not only because of the aoumd effect or the lyrics... I love this because it represents …

Are you an Urdu, Hindi or Punjabi speaking mediocre? Is your native language not English? God! Reall…