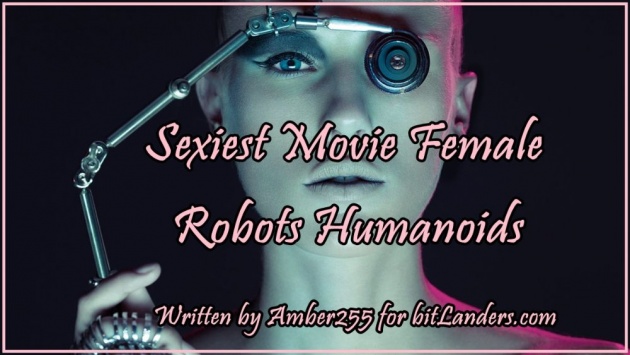 Science fiction, cinema, and popular science journalism now find all kind of actions for humanoid android robots. They perform the duties of a nurse, nanny, housekeeper, astronaut, soldier. Engineers try to make them as prototypes ideologically neutral, similar to astronauts, to Einstein, or to a strict secretary. However, robots androids that we see in the movies look very different, reminding the heroines of our most forbidden dreams.

Female robots: sexy, dangerous, bold. Their possibilities are endless; their enemies are doomed to be defeated; they have practically no flaws.

Robots began to appear in cinema in 1927 when Fritz Lang showed the android Maria in the movie Metropolis. It was the first robot ever depicted in the film.

Can robots/androids/cyborgs be attractive? Hell yes. The debate is not: "Can a robot be sexy?" It's: "Which robot is the sexiest?"

The trend of the cinema of the XXI century - strong heroine. And this is not a curtsey in the direction of feminism - such women really delight and excite. Especially if they are machines - robots. For several decades now Hollywood has convinced us that robots, cyborg, computer programs deserve spectator love, and it does this by entrusting fantastic roles to fantastically sexy actresses. Especially for fans of Sci-Fi and beautiful creatures with artificial intelligence, I created Querlo Chat with the most famous heroines - cyborgs from the world of cinema. Enjoy!

Especially for fans of Sci-Fi and beautiful creatures with artificial intelligence, I created Querlo Chat with the most famous heroines - cyborgs from the world of cinema. Enjoy!

And so, if you decide to chat with me on Querlo chat, you will find some info about these sexy female robots androids:

Persephone from The Matrix Reloaded film - program in the Matrix, the wife of Merovingen, whom she betrayed to help resistance people. For more details, check Querlo Chat.

Cash from the Cyborg 2: Glass Shadow - the American corporation created a cyborg in the form of a beautiful woman, into whose body a powerful liquid explosive was introduced. She got to know that her creators doomed her to die. The girl doesn't mind to let take away her life.

Quorra from the TRON: Legacy  - Quorra is a program, but an unusual program. Helps Sam Flynn, and his father Kevin in the fight against Clu. Fearless Quorra always appears unexpectedly, is at risk. She has a childish enthusiasm.

Simone from the movie S1m0ne - chat with me about Simone - virtual actress - on Querlo chat. Simone is a digital model of man. She is fake! You see the perfect woman and insanely talented actress. In fact - there is no actress or woman. There is a super quality program.

Alice from the Transformers: Revenge of the Fallen - if you are a fan of beautiful Isabel Lucas and transformers, don't hesitate to visit Querlo chat for more details.

T-X from Terminator 3: Rise of the Machines - T-X is the newest model combining the traditional design of the robots with a rigid metal skeleton and later developments: instead of the biological envelope, T-X has the shape-changing liquid metal.

Chat with me on Querlo chat about sexiest female robots androids (the link Sexiest Female Robots Humanoids in Movies opens in full-screen mode:

Hollywood loves to fantasize about the robotization of the future. Androids that cannot be distinguished from humans, revolutionary robots, robots capable of feeling, dreaming, and even falling in love. The most beautiful female androids attract eyes of spectators as the beauty is always appreciated in the movies.

Admit it, each of us since childhood wanted to go on an intergalactic journey in the company of an alien mind to explore the expanses of the universe. And films help us to do it. They fascinate us and make us fear the future because no one knows what from the cinematography's creations can become true and what not. As it is said, in each piece of fantasy always lies a piece of truth.

The smarter the robot, the more it looks like an ordinary person, the more it wants to become a real person, evoking the audience's sympathy, tenderness, compassion.

But the public is not at all opposed - it always wants only emotions, emotions, and more emotions. And if they are shown by an iron sexy woman - so this is even better, such a view does not bother!

Robots do not leave the cinema screens for a long time, but until now just a little what we saw on the screen, we can see in reality. The situation is changing - thanks to technology. We are already close to making many fantastic characters come true.

Perhaps we are not far enough advanced in the field of creating artificial intelligence. Nevertheless, in some other technologies necessary for the manufacture of robots, science has gone far, and now we can do things that we could only dream of in the darkness of a cinema hall.