Part of bitlanders' sharing option is Google+, you might have noticed that (g+) Google+ share button together with Facebook and Twitter. This basically means that when you feel that certain content is worthy to be shared, then just click on one of the buttons and that will open up a new window and possibly share the information to those sites.

Being a bitLanders user, I had always used these buttons to share the blog, photo or video content to other social sites. So if we check my Google+ page, it shows only my bitLanders contents all throughout those years. However, it seems like I am going to be extracting these data before April of this year due to the closure of the said site.

Google+ has been with us for many many years, I had been a user but really didn't have the luxury of time to give it attention. I used other several applications for Google but this one here was used solely for sharing links and contents from different sites such as bitLanders.

Now, Google had announced its closure and has given their users the chance to export their files and other data.

But I have already read from thehackernews about Google's hacking case, the vulnerability of their server making their massive users' profile data to be used by some 400+ developers.

So today's C-Blogging will be about Google+ as a tribute and also as a means for me to answer several questions about this step. Also, I will be dealing as well the steps in exporting our data and other content available from within the site. If you have a Google+ account and had been a user for years like me, it would be worthy to go through the same steps too. Learn more about it in this Querlo Chat about Google+ Closure. 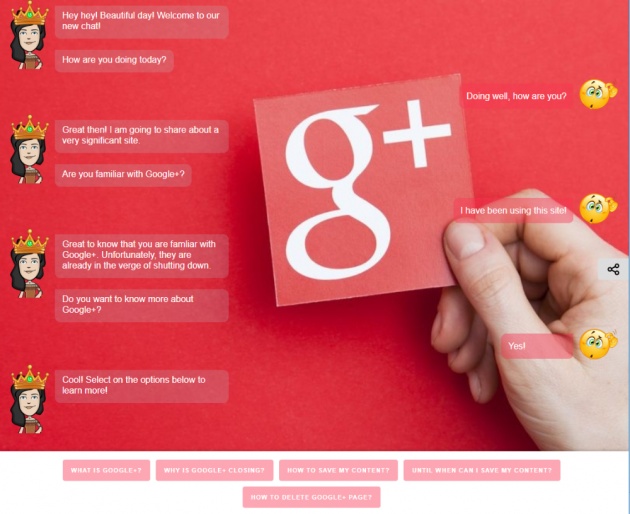 This blog is published in support to bitLanders' C-blogging. Learn more about it in the quoted box below:

The future of blogging - The bitLanders C-blogging

bitLanders, the worldwide blogging platform, introduces the future of blogging "The bitLanders C-blogging", Conversational AI blogging by Querlo powered by IBM Watson and Microsoft Azure with the purpose to provide bloggers the possibility to communicate and establish a conversational relationship with their readers.

Thanks to the world's most prompt technology - Artificial Intelligence, powered by Querlo's conversational AI technology.

Querlo integrates the DeepQA Artificial Intelligence functionality of IBM Watson and Microsoft – a collaboration which sets Querlo apart from other solutions in the market.

Information from: New topics for "The bitLanders C-blogging"!

Thank you for reading and participating in this Querlo Chat!

Querlo Tutorials | 1.5 How to edit a chat