Almost all of the living things almost made up of tiny units called cells. Our bodies consist of millions upon millions of these cells. In fact, a fully grown adult has more than 50,000,000,000,000 of them. Most of these cells are so small, that they cannot be seen without a microscope.

Many tiny forms of life, such as amoebas, bacteria, and yeasts, are made up of only a single self-contained cell. But in man-and in other larger forms of life- all the billions of cells work together. They keep themselves alive and by doing so, keep the body healthy.

Cells vary widely in size, , and activities. They also differ from creature to creature, and plant cells are different from animal cells. Yet, in spite of these differences, nearly all cells have the same basic parts. 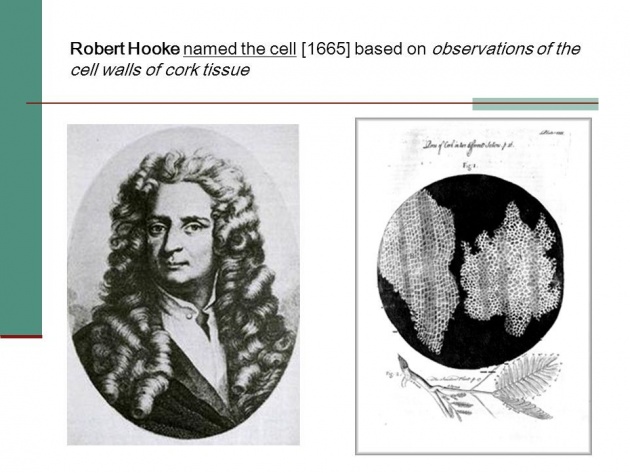 Image © -Slideplayer :The English scientist Robert Hooke was the first person to see cells, which can only be oberved under a microscope. He drew these cork cells in 1665.

PARTS OF A CELL

Despite their many differences, most cells are built the same way. Surrounding the cell, like thin skin, is the cell membrane. Inside this is a soft colorless jelly called the cytoplasm. It contains many smaller objects called cellular organelles. Near the center of the cell is a small dense mass, round in shape called the nucleus, which contains thread-like material called chromatin. The nucleus is separated from the rest of the cell by its own skin, the nuclear membrane. The cell membrane cytoplasm and nucleus are the basic parts off nearly all cells. Together they form what is called protoplasm.

The cell membrane separates the cell from the outside and from the other cells around it. It acts rather like a sieve, allowing some substances to enter the cell and others to escape. Oxygen, food, salts, and water pass into the cell. Water and waste products, including carbon dioxide, leave it.

When food and other materials enter the cytoplasm, they are used in various ways. It is most of the cytoplasm that most of the cell's metabolism- it's a network of chemical change takes place. There, some substances from food are built up into new cell parts; old parts are broken down and discarded as waste. Some food materials are broken down to release the energy stored in them. Some of this energy is used to power the cell's processes and some are released as heat.

The nucleus is the cell's main control system. If the nucleus is removed, the cell will die. There is, however, one group of body cells which never have a nucleus: the red blood cells of mammals. These die after a few weeks, but the body continually produces new ones to replace those who are lost.

If a cell is damaged, it is the nucleus that controls its repair. Even more important, the nucleus controls how a cell grows and reproduces itself to make two new cells. The nucleus can only work together with the cytoplasm. The nucleus issues the chemical 'orders'-- for example, for the manufacture of the new cellular material- which is carried out by structures within the cytoplasm.

The nucleus contains the genes which decide the characteristics of the cell. This is the interesting sets of 'instructions' that give the cell its characteristic shape and function. These instructions are contained of a sort code in slender bent rods called chromosomes. Chromosomes are made up a very complex chemical molecule known as deoxyribonucleic acid, or DNA. DNA belongs to an extremely important class of body chemicals called nucleic acid.

Small, round objects called nucleoli are also found inside the nucleus. These contain a different sort of nucleic acid called ribonucleic acid, or RNA. 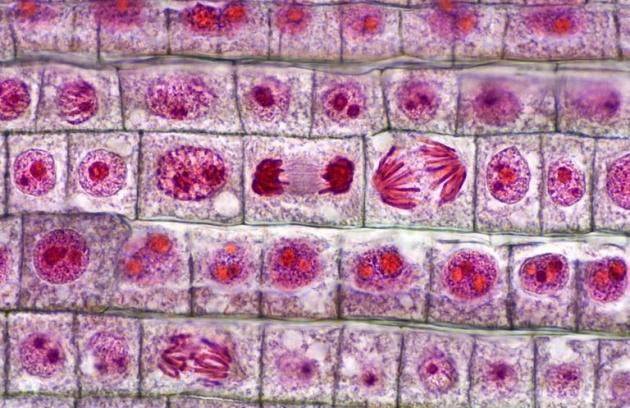 Image © - ThoughtCo: The cells in a tip of onion root, magnified 1,500 times. The cytoplasm is stained blue, the nucleus is pink.

The chemical instruction given by the nucleus is received by the tiny structures in the cytoplasm called ribosomes. These are so small that it can only be seen with a very powerful electron microscope. But they are very important because they make proteins. Proteins are complicated chemical substances which are vital for every form of life. They make up much of a cell's structure, the control chemical changes according to the instructions of the nucleus. The ribosomes are scattered over the surface of a folded double membrane structure in the cytoplasm called the endoplasmic reticulum.

Also very important and very small- though much larger than the ribosomes- are sausage-shaped bodies called mitochondria. These act as the cell's furnaces or power-houses. By breaking down food material, such as sugar, they release from the food a kind of energy. They then repackaged this energy in the form of special high-powered chemical molecules. In other parts of the cell, these molecules which are known by their initials as ATP- release their energy whenever it is needed. This might be to help a muscle contractor to power the manufacture of proteins.

Among the other organelles found in a cell's cytoplasm are Golgi bodies and chloroplasts. (Only plant cells have Chloroplasts.) Golgi bodies are involved in packaging the cell products that are to be secreted. Chloroplasts which contains green pigment called Chlorophyll, carry on the process of photosynthesis, by which the plant cells make their own food. In this process, water is split into hydrogen and oxygen by means of energy from sunlight which is absorbed by the chlorophyll. Then the hydrogen combines with the carbon dioxide to produce sugar. It is because the animal cells cannot produce the carbon-containing substance, such as sugar, that all animals- man included- must obtain foods by eating animals and plants. 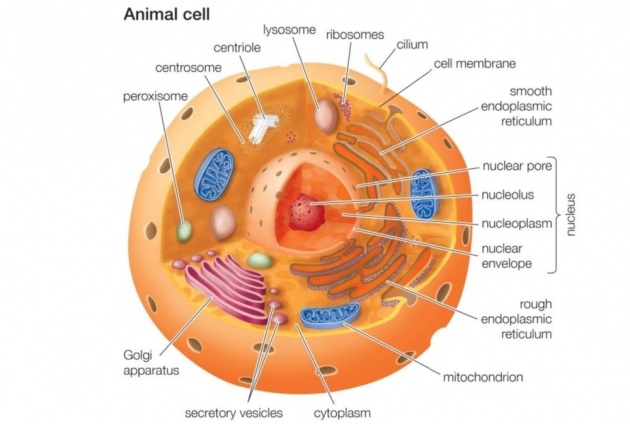 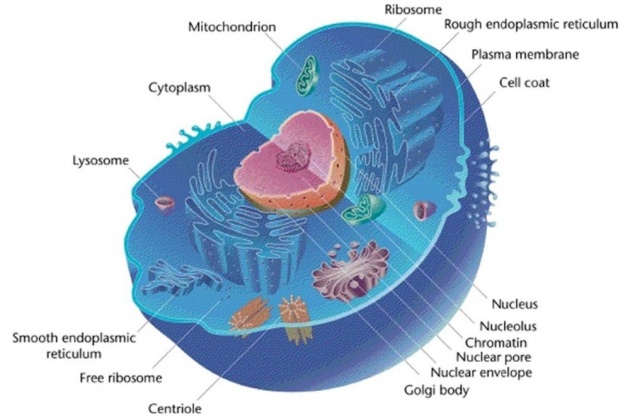 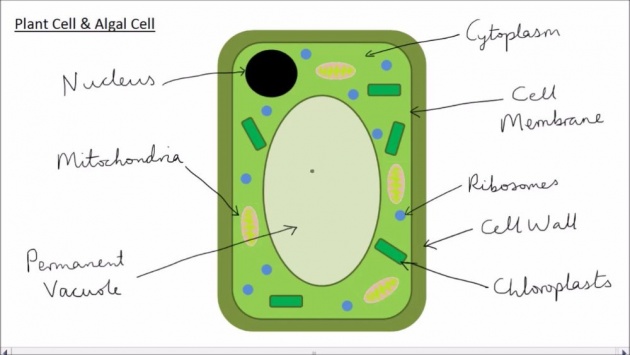 Perhaps the most amazing thing a cell can do is to divide in two, forming two identical cells. The amoeba, a single-celled creature, reproduces in this way: one amoeba splits in half to make two. A similar process of a cell division called mitosis is taking place all the times in most complicated creatures. This is a very important process because it causes dead cells to be continually replaced and wounds to be repaired.

In most animal cells, a pair of small bodies called centrioles, which are near the nucleus, start off the process of mitosis. Fibers, going out in all directions in both centrioles, formed a star-shaped pattern called an aster. When the fibers from each centriole run into each other, they form a sort of bridge called the spindle. As the asters become larger, the two centrioles are pushed apart.

Then, around the middle of the cell, a furrow appears at the surface. As the two furrows deepen, the cell divides in two, as does each centrioles, so that each new cell has two centrioles.

The most important part of cell division is the splitting of the nucleus. In this way, the genetic instructions contained the genetic DNA molecules are copied so that each new cell receives a full set of instructions. It is during this process that the chromatin in the nucleus groups together in the chromosomes. The cells of every creature have a characteristic number of chromosomes and during cell divisions, they are duplicated. They separate lengthways to form a pair and move to the middle of the spindle. There, each pair is pulled apart by special spindle fibers, so that the nucleus exactly like in the original cell is formed in each new one.

But there is one form of a cell division that chromosomes are not duplicated. This is known as reduction-division or meiosis. In meiosis, the number of chromosomes is halved- in man, to 23. Egg cells and sperm cells are formed by meiosis, so they have half a normal amount of DNA. But when a sperm cell joins with an egg, the full number is restored. So it is because 23 of the original chromosomes came from the father's sperm and 23 from the mother's egg, that a human body inherits its characteristics from both its parents.

All rights reserved. No part of this article
may be reproduced without the author's personal experience.

The structural appearances of plant cells and animal cells show great extents of similarities. This …

Image source google.com Unusual situations may arise in the function of the kidney by factors origin…

Vitamins for Skin: A Guide to a Healthier

Real beauty isn't about being picture perfect. You should be able to admire and feel good about your…

The term biology is derived from the Greek word ί, bios, "life" and the suffix -ί, -logia, "study …