Cestitam Svima - Congratulations to All 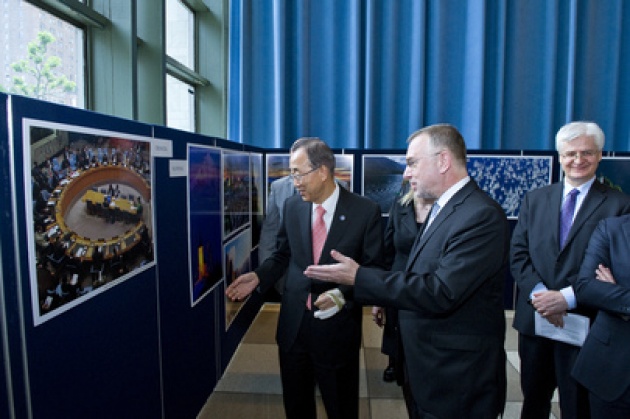 Twenty years to the day, 22 May 1992, Tuesday, 22 May 2012 was much cause of celebration for three United Nations Member States: Bosnia & Herzegovina, Croatia, and Slovenia as they commemorated 20 Years of UN Membership. War is now over, three flags stand proud, and guests to the special evening ceremony toasted the success in moving forward to greater peace, economic prosperity, and integration.

Esteemed guests included Ambassadors, members of the press, business community and academic leaders, diaspora, and most prominently the Secretary-General. BiH’s first Ambassador to the UN, Ambassador Muhamed Sacirbey and myself were also present with dreams realized on this momentous day.

Secretary-General Ban Ki-moon saluted the members in the common native language to all three groups: “Cestitam Svima” (Congratulations to all.)

Secretary-General Ban Ki-moon (left) views photos in an exhibit celebrating the 20 years of UN membership of Bosnia and Herzegovina, Croatia and Slovenia, at UN Headquarters. Pictured with him are Croatia’s Permanent Representative to the UN, Ranko Vilović (centre), and Miloš Vukašinović (right), Acting Permanent Representative of Bosnia and Herzegovina to the UN.

Croatia is a great tourist country

How develop business in Croatia

For develop a business in Croatia just contact me…

Comparison Between League of Nations and United Nations Introduction: In order to know how internati…

Club Aquarius is located at the Zrće beach on the island of Pag. The club works all day as a beach …