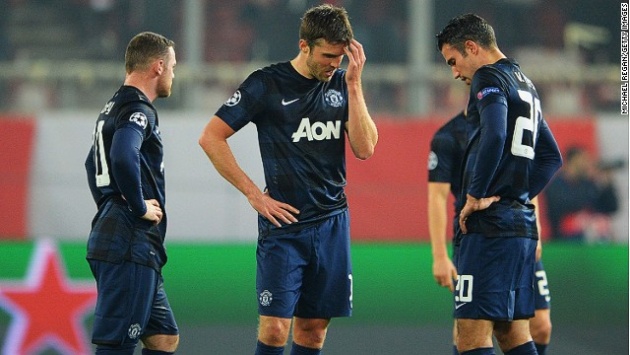 (CNN) -- If Manchester United were hoping to escape their domestic troubles in Europe then the English Premier League champions only found more tragedy in Greece.

Olympiakos swept aside a lacklustre United side 2-0 to see the two-time Champions League winners on the verge of an exit in the last 16.

The hard-working Alejandro Dominguez deflected in the ball with a deft back heel after 38 minutes to cue frenzied excitement among the red-and-white hued home fans.

A brilliant, second goal from Joel Campbell -- on loan to the Greek champions from Arsenal -- sealed United's fate in the second half.

Van Persie's best chance came in the final 10 minutes of the match when the Dutchman found himself clear on goal but skied the ball over the crossbar.

United have already been knocked out of both domestic cup competitions and, in the league, trail 15 points behind leaders Chelsea in eighth position.

Europe offers Moyes his only chance of redemption in a difficult transitional season since Sir Alex Ferguson's retirement.

The Manchester United malaise is uncomfortably setting in and the team have an uphill battle to overturn a tenacious Greek side in the return leg at Old Trafford on March 19th.

Manchester United midfielder Michael Carrick told Sky Sports: "Everyone's having a dig and enjoying it -- we've got to take it on the chin and bounce back."

The German side had strolled to an early 2-0 lead as Henrikh Mkhitaryan and Marco Reus scored within 70 seconds of each other in the opening five minutes.

Zenit, featuring in the last 16 for only the second time, breathed new life into the match when Oleg Shatov made the most of a melee in the Dortmund box to score when the ball bounced back off the post.

The crowd at the Petrovsky Stadium roared but, minutes later, Robert Lewandowski bobbled the ball beyond the Zenit keeper to stretch the scoreline to 3-1.

Zenit were given a second chance when the referee awarded a penalty after Viktor Faizulin clumsily went down inside the area.

The Brazilian Hulk muscled Zenit back into contention as he whipped the ball into the net; a cool strike considering he'd missed his last three penalties.

But the Russian defense buckled once more and Lewandowski, who is joining Borussia's rivals Bayern Munich at the end of the season, stroked in a diagonal cross

Borussia take a 4-2 lead back for the home leg as Jurgen Klopps's team, just like Manchester United, hope to seek solace from a dismal domestic campaign in the glittering realms of the Champions League.