Hello Bitlanders! Time to review a movie that honestly makes me cry every time! This movie was going to be a double  win for me since it stars Die Antwoord members Ninja and Yolandi AND is about A.I a subject I love to explore. It's closer than you think and this movie discusses a lot of real topics while also being very clever and entertaining. Let's get to it!!

This movie is a scifi set in a dystopic future South Africa.

Anderson Cooper- as himself 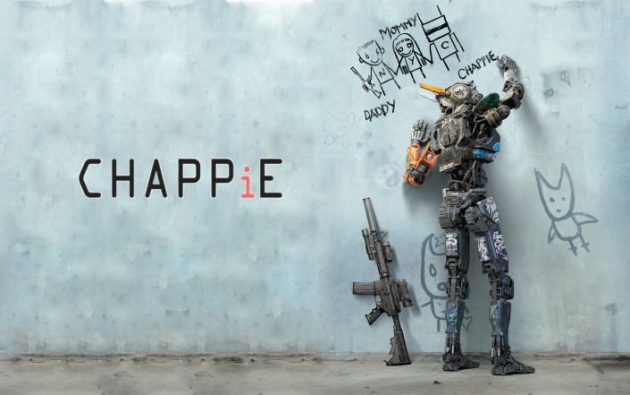 Weapons manufacturer Tetravaal builds a squadron of scouts-advanced attack robots- to deal with rising crime in South Africa, specifically Johannesburg, due to worsening crime rates. The scouts are autonomous androids built by scientist Deon Wilson to help mitigate the lack of police force at large in the city.

Australian engineer Vincent Moore is building a competing project within the same company called MOOSE and is secretly jealous of Wilson as he feels he was not given sufficient attention for his own accomplishments.

Deon in his off time, creates an artificial intelligence that is able to mimic human emotion as well as have it's own opinions.  Deon wants to test his A.I on a scout but his boss, CEO of Tetravaal, Michelle Bradley, denies him access.

Deon and the broken scout

Instead, Deon steals a recently damaged robot right before it's meant to be destroyed and puts it in his van along with his key for updating the A.I software.

On his way home he is kidnapped by a group of gang members, who threaten to kill him unless he fixes up the robot he stole to help them steal. The gangsters are Ninja, Yolandi and Amerika.

Deon proceeds to install his A.I into the damaged robot. The robot boots up and reacts to the world like a terrified child. Yolandi and Deon manage to calm and console the robot, teaching him words and naming him "Chappie".

Eventually Ninja forces Deon away despite his desire to stay with Chappie. 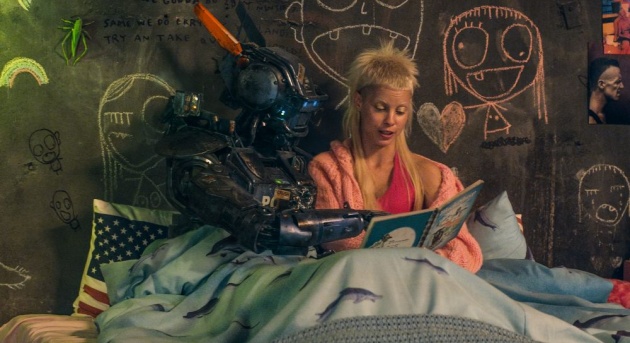 Yolandi wishes to baby Chappie and treat him like a child, but Ninja, under pressure from the 20 million rand debt the gang owes Hippo, another powerful gangster, is impatient with Chappie and wants him to toughen up fast.

He is also aware that being broken, Chappie only has a limited amount of time before his irreplaceable battery runs out [the reason, in fact, that the robot was originally set to be destroyed]

In an effort to smarten Chappie up, Ninja abandons him in a rough neighborhood thinking forcing him to make it home by himself with make him a man. 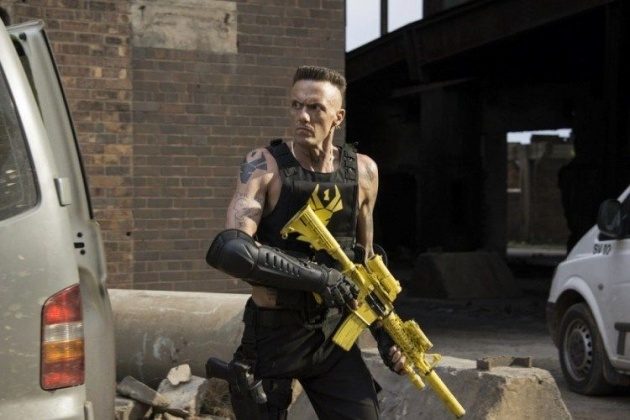 After being attacked and hurt by thugs, Chappie is followed by Vincent Moore, who has a plan to deactivate all the scout robots except for his own, MOOSE. He manages to steal the guard key for his own purposes, but Chappie manages to escape, fleeing back to the hideout.

Chappie manages to forgive Ninja his betrayal after he teaches him some martial arts and weapons handling. Ninja, Yolandi and Amerika then lie to Chappie and get him to steal cars for them under the guise of helping to pay for a new battery for him so that he doesn't have to die. 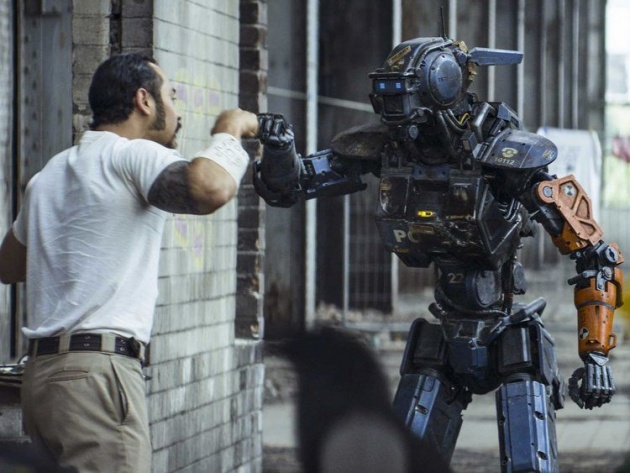 Back at Tetravaal, Vincent uses the key to disable all the scouts citywide- including Chappie. Crime runs wild on the streets, and Deon takes Chappie back to Tetravaal to try and fix him.

After a restart, Chappies notices the helmet that is made to control MOOSE. Back at at he hideout he re-engineers it to allow consciousness transfers so that he can exit his broken body and upload his consciousness into a new one.

The gang use Chappie to rob an armoured car. This event ends up on the news attracting the attention of Tetravaal who begin to pursue them.

Chappie at this point learns that Ninja has been lying to him about acquiring him a new body. Right before he is about to kill Ninja, Deon arrives to tell them that Michelle Bradley has ordered Chappie destroyed. 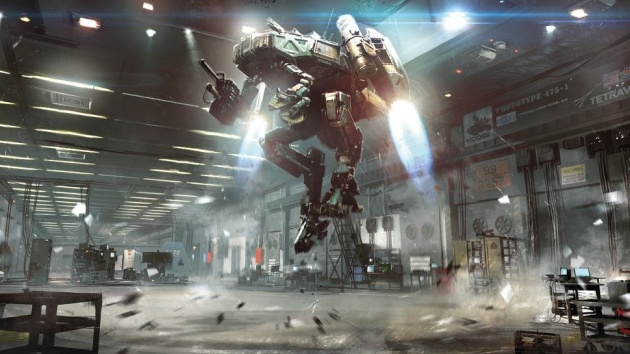 Directly following this, the MOOSE robot [which is remotely controlled by Vincent Moore] is booted up to assassinate Deon and Chappie, as Hippo simultaneously shows up to get the debt he is owned.

In the ensuing bloodbath Amerika, Hippo and Yolandi are killed, and Deon is mortally wounded.

Chappie then destroys MOOSE by detonating a bomb.

Angered by the death of his "mommy" [Yolandi] Chappie drives Deon to the factory, storms in, and beats Vincent to death. 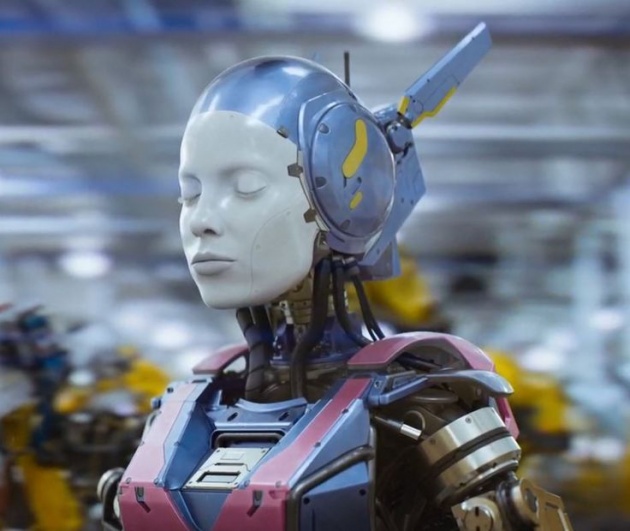 The two go into hiding and while burning memoriabilia of Yolandi, Ninja finds a box containing a mini Yolandi doll and a flash drive labelled "Mommy's Consciousness Test Backup" . Chappie then hacks into Tetravaals manufacturing facility and builds a robot resembling Yolandi that he uploads the drive's contents to.

As I stated in my intro, this movie made me tear up MANY times! I am very fascinated with the concept of A.I and it's implications for us and found this to be a refreshing take on a classical idea: what would an A.I robot be like? 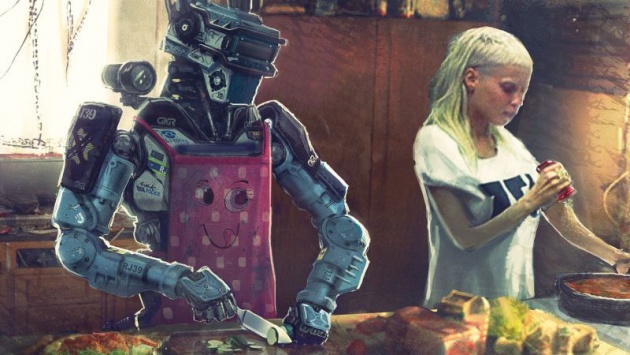 Chappie is portrayed to be very childlike when he first awakens. This makes sense, because even though he is an advanced robot and an advanced from of life, he hasn't experienced anything consciously. I felt that this would be accurate. Most A.I technology we see nowadays is learning machines that learn through trail and error about their surroundings and bodies.

It stands to reason that if we were able to give a computer sentience, awareness, consciousness..that it would act very childish at first. It's lack of knowledge of the world and innocence would be very real. 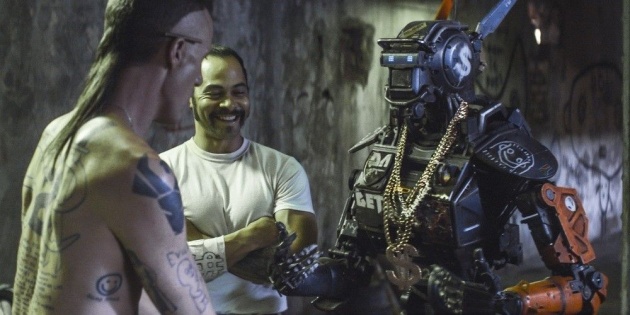 Chappie's awakening into consciousness is kind of beautiful. Learning about the world and the social biases against him, and how people treat each other is very compelling. I really feel for this character and loved how they played with that line of alive vs autonomous, at least as far as the world perceives it. The fact that Ninja can't fathom at first why leaving Chappie in a dangerous neighborhood is equivalent to child abuse is very interesting. After all, this is a robot killing machine, he should be fine .....right?

I'm usually not huge on action movies, but the action in this one I find very acceptable. Since the whole premise of the creation of the scout robots was excessive crime, it makes sense that there is a lot of violence and death in this movie. It doesn't feel like filler to flesh out the movie.

I give this movie at 3/5 rating! I like it a lot, although I suppose it could have been better. Some of the characters were underdeveloped [like Deon and Vincent] But overall I really felt the message. Also, again sucker for scifi!!

TheRollingStone wasn't a huge fan and had this to say of the movie:

Chappie feels played out from the start when a scientist reboots a police droid so that it can think and feel for itself. Kidnapped by thugs the droid is programmed to shoot, steal cars and talk street, muthafuka.

Rotten Tomatoes also found "Chappie" to be tepid and rated them at 32%.

Thanks for reading my review of "Chappie" I hope you found it helpful and enjoyable. I hope if you haven't seen this movie you check it out! Have a great day!