"Voyage and return" is a basic plot type about a journey,  but of a different kind compared to "Plot 3 The Quest". Here the protagonist is transported from their everyday world into another world where everything seems abnormal and dreamlike. Initially the experience seems wonderful but gradually “a shadow” develops, and the protagonist can feel trapped and eventually threatened in this world, and so the story usually ends in a great escape where the protagonist escapes back to their normal world. 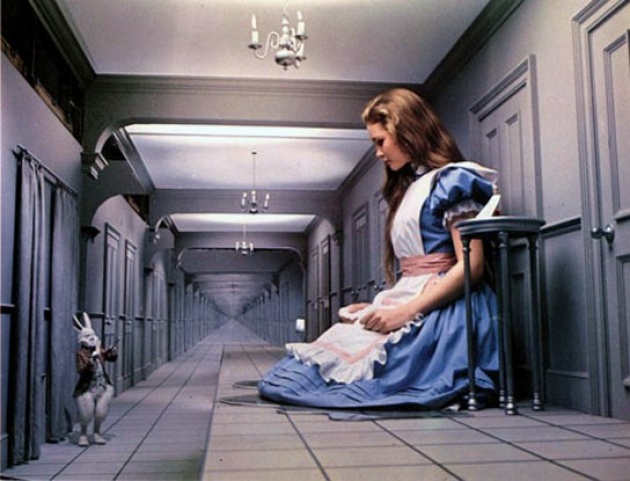 Three classic stories which are the greatest examples of "Voyage and Return" are very much centred on female protagonists. Alice’s Adventures in Wonderland, The Wizard of Oz and Gone With the Wind. In the first story, Alice is bored on a hot summers day, and falls through a hole in the ground where she encounters a wonderland which causes her size to change relative to the surroundings, and she meets a succession of strange animals talking to her in riddles. This wonderland then starts to turn into a nightmare when the Queen of Hearts orders her beheading prompting Alice to walk up and find herself safely in her normal everyday world.

There are a host of other such stories: The Tale of Peter Rabbit, Robinson Crusoe, The Lion, Witch and the Wardrobe, Swift’s Gulliver travels, Journey to The Centre of the Earth, The Lord of the Flies, and Total Recall. There are variations to the extent of the “other world” which need be so overt like Alice’s wonderland, but a more subtle “other world where there has been a change of social circumstances. Like in Brideshead Revisited the central character is plucked out of his tedious world and put into an exotic upper class world. In Gone with The Wind, the world is the destructive one the American Civil war.

The main difference that this plot has from the Quest, is that the protagonist stumbles upon their journey unexpectedly whereas in the Quest the protagonist initially sets out with a purpose and is conscious of their task. The protagonist is violently propelled into this world (such as Alice falling through the hole in the ground) and the other world operates on an entirely different framework. Their goal is often to make sense of this puzzling other world and return back to their normal world.

This plot  reflects the way that sleep and dreams can transport us into another world every night and then we are return to our normal worlds when we wake. The journey in Voyage and return  is often an exploration of the unconscious mind!

Hey guys!! How are you all doing? I hope you are having a great time and had a good start this 2019.…