Earlier this week, I had posted a blog about where our surprise company Christmas party was held. Indeed a surprising one because all of us had no single idea on where to go, we thought of flying out of the island but it was revealed to us that we were just be staying in Mactan however, it was not the average party we had during the past years because this time, we were in for a luxurious one.

Staying in Shangri-la Mactan Resort & Spa was something I planned before but I am sure that it would take a huge amount off our savings if we do so. Gladly, we don't have to spend the amount anymore as the boss already treated us for one. 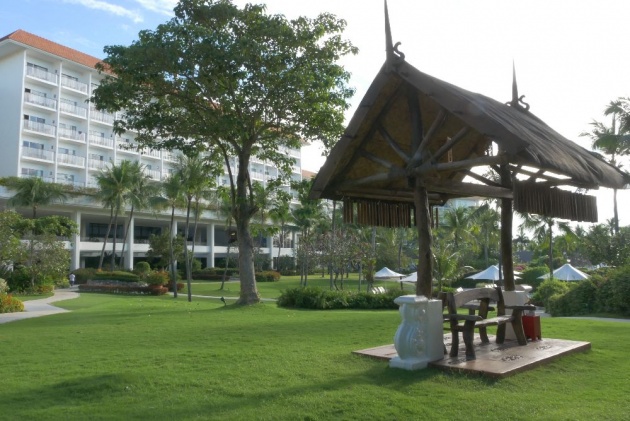 The previous blog contained the details on what happened on the first day of the party. Of course since we stayed in a huge resort, we have lots of options on what to do and where to be. Shangri-la Mactan Resort & Spa has a lot of areas and unlimited activities to do. Our first day was all about getting to know the resort. We went to the shore area, we snorkel, kayak and even played with a foreighner boy who understands three languages, English, French and Spanish.

That night we had a buffet at the expensive in house 5 star restaurant of Shangri-la Mactan Resort & Spa, the Tides. We started at around seven in the evening and ended almost ten in the evening but we had to extend our stay at the restaurant for our exchanging gifts. We also have a lot of drinks that night as our dinner included a flowing supply of drinks.

So, the next day was more of a chill day for everyone. I slept really really late the day before as we had talked the entire evening but I still managed to wake up at around six thirty the next day. My companions were still asleep but they got up enough to have breakfast which was another buffet.

For my case, I went to different areas of the resort. I found their spa area which has a relaxing fountain adjacent to its entrance. I also found the resort chapel next to the spa. There was a little mini garden too. I was totally entertained while walking around until I received a message that the boss was on his way to the Tides for breakfast. 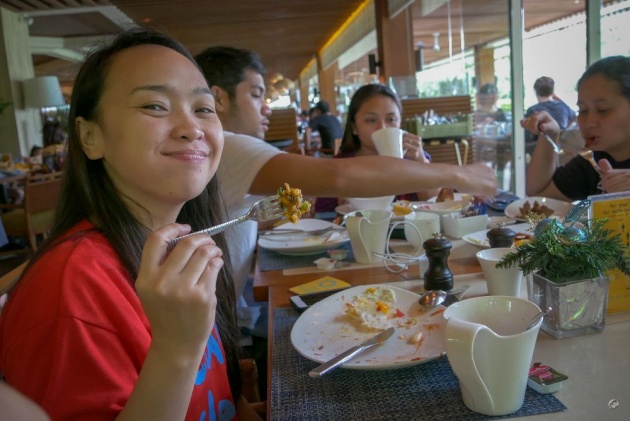 I thought this was my first ever breakfast buffet but I realized that when we went to Boracay last year, we had breakfast buffet at a hotel in Kalibo, I am too lazy to figure out the hotel name though.

The breakfast included still a huge array of food options. There's still Filipno option by the way and yet other countries' favorite breakfast items. I was surprised to see sushi for breakfast but was really delighted to have fresh Wheat Greass shake! I believe it was the most in demand item during breakfast as I can spot Wheat Grass shake glasses in every table. 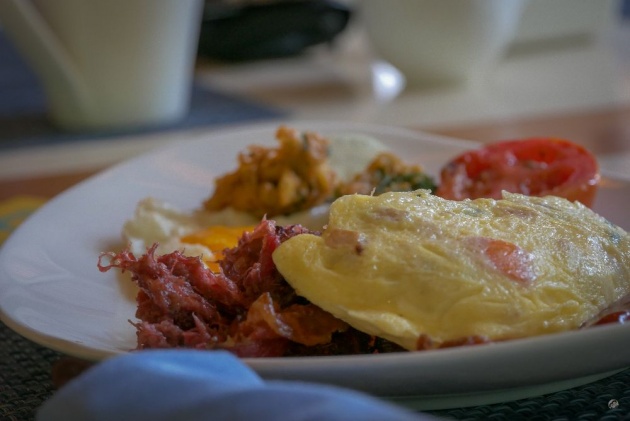 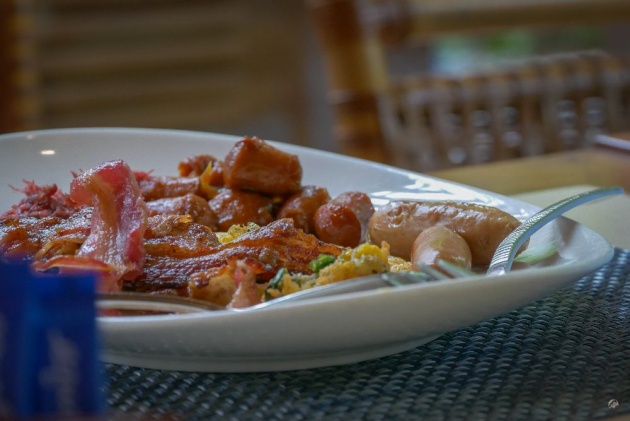 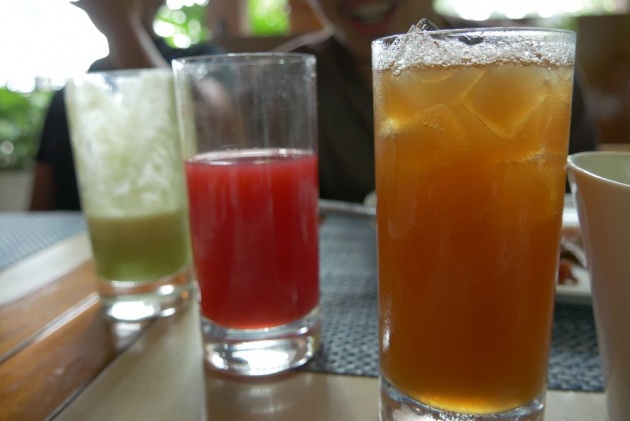 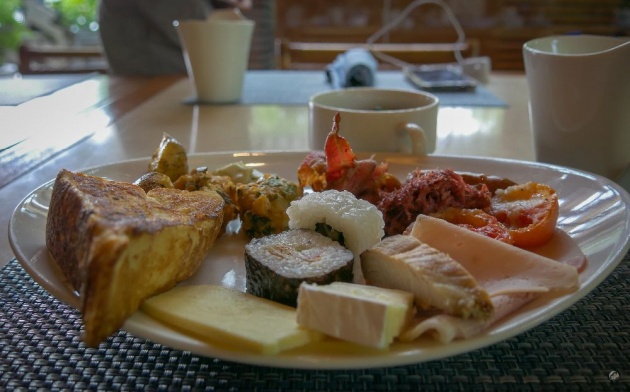 I on the other hand got easily full during the breakfast buffet! I thought I was hungry for breakfast but I guess I am better with dinner buffets, Anyway, we were able to sneak out some fruits too on our way out of the restaurant.

The next few hours were spent taking photos of the entire team. We took photos at the pool side area where the resort building were visible as background. We even brought our tarpaulin with us which we proudly opened up and displayed.

The next spot was at the green lawn filled with tropical coconut trees, tall ones and which had given shade to the properly trimmed bermuda grasses. We were lucky there were no photo bombers while we took our time taking lots and lots of images. I had fun taking candid shots and had even enjoyed the jump shots of the team! Even our boss did the jump shots! 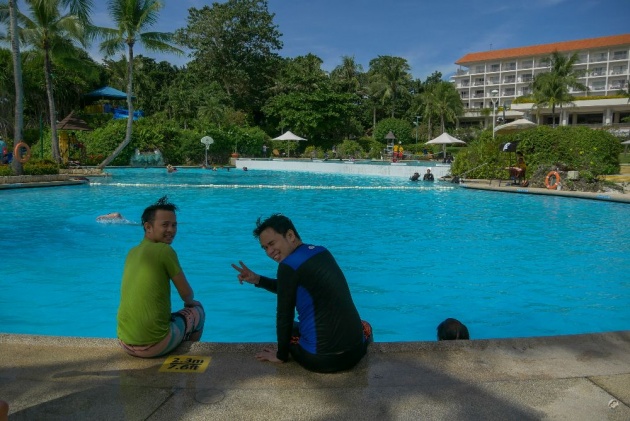 So after this, all of us went away, doing whatever we wanted. Some had gone back to the swimming pool and enjoyed a few more dips and dives while jump dive was not permitted, one of our colleagues still did a front dive which called the attention of the life guards.

The rest had to make the most out of the stay and went to different areas of the resort, I had taken more clips and shots of the spots like their cabana areas as well as the swimming pool. I regret not being able to take a sun rise time lapse though because I woke up late so I had to compensate it with time lapse at the ocean wing view swimming pool as well as the beach area. 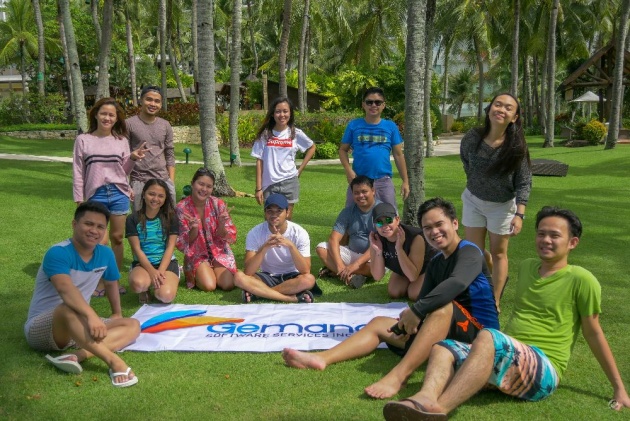 As 11 in the morning was approaching, we decided to get back to our room so we could prepare for check out and get ourselves ready. We rested at our room too and grabbed that opportunity to feel like prince and princesses in the room. We drank tea, had coffee even while wearing our bath robes. While writing this blog, I wished I had also used the bath tub and had a relaxing dip!

Anyways, we also regret not requesting for slippers as well as laundry bags which could have been our souvenir items too from Shangri-la Mactan Resort & Spa. I wish we stayed a bit longer but we still have work in the afternoon. Check out time actually was at 12 noon but we were already ready at the lobby beforehand. 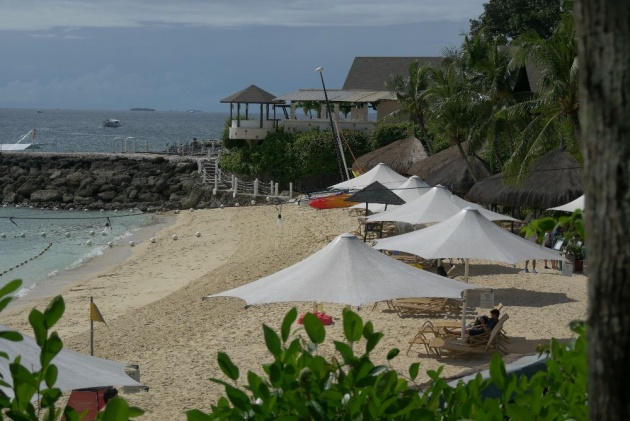 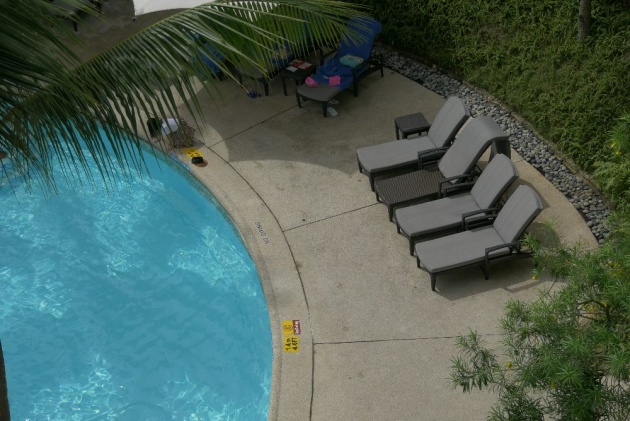 Checking out of the resort however is a bit challenging. They had a lot of guests that everyone were having a hard time getting accommodated. The front desk staff did their best to entertain everyone and also serve us with their drinks and sweets. They gave us their mini icecreams to cool us down as well as cold fresh juices.

Overall, it felt really nice that we had a great Christmas Party this year. We can't believe that the boss had spent hundreds if not thousands of pesoses just so we could enjoy this celebration.

I personally liked this concept but there are still disadvantages to it like us not getting more time together in building rapport with each other because everyone would just be busy roaming around, taking photos and videos and would even be late in such gatherings like for breakfast, some were late that they almost missed breakfast.

But it was a great experience, a luxurious one and I am thankful to our boss for treating and spoiling us with this. It was indeed a Merry Christmas!