Corruption in Afghanistan, it makes the community weaker

Corruption as one of the main factors of backwardness of communities have been challenging for ever. It mostly treats the development of the communities, harms the self- confidence of the society and causes that disqualified people come to power and take control of the affairs corruptly in a community. Therefore, the management cycle of the community will develop the same.  The government as the most significant institution of executive, policy and decision making in a society, if be corrupted, the whole society will be badly impacted. So, a corrupted society could not picture a bright future for itself and is not able to arrange and fulfill a long term improvement plan. Chiefly, corruption harms the fundamental of a society: education, economics, politics, culture, management and qualifications. So, the development competition of the world would be lost by corrupted societies.

When the political arena of a country is corrupted, and the politicians come up by corruption or in an unsound process, then the politics system of the country would not work properly, as it is founded for. The politicians’ efficiency to manage and develop the community, face the challenges, and making appropriate resolutions for the community, severely decreases. The political system which is founded to keep its people’s right inside and outside the country, support justice, and afford to develop the country, would change to an unimpressive and a scofflaw system. It change to a barrier to prevent the society from democracy, a system which people choose their leaders and representatives in sound and true manners, and tries to keep them out of politician and decision making for their countries and future. So, the society is neither managed by the people nor by democratic institution, but by a group of leaders who misuses the democracy to prevent people from democracy.

The countries with corruption in their economics system, the economics projects and plans are performed in non-standard ways which decreases their efficiency, and are not helpful as much as are paid for. Mostly, the government investments are not facing good consequences. So, sometimes the government needs to invest several times in a project to reach to the determined target, which is so costly. Investment by private sector is also so challenging, and investors are not desirous to invest in such a situation. Getting projects and starting a new corporation up is started by corruption that increases the cost of investments highly, and sometimes investment is not beneficial for some potential projects, cause of corruption. So, corruption increases the production costs which compensate by prices in bazaar. High prices decrease the exports and costumer demands that negatively impress the economy and production. 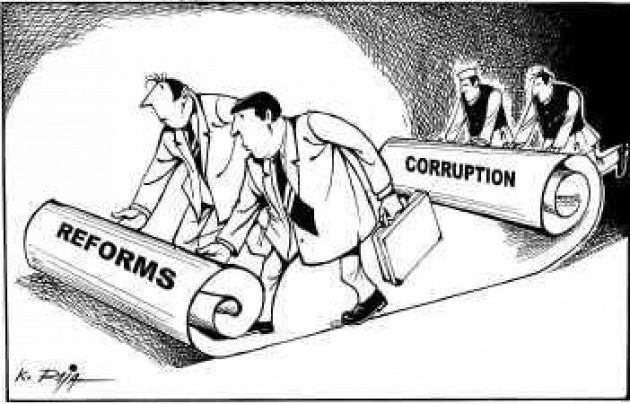 In a corrupted system, specialists and professionals are changed with people who come by money, discrimination, relations and so on. Corruption impress badly the economic, political and management system of the community. The first step to have a durable development is that corruption should be eliminated. A transparent and responsive system takes control of the government in a society.