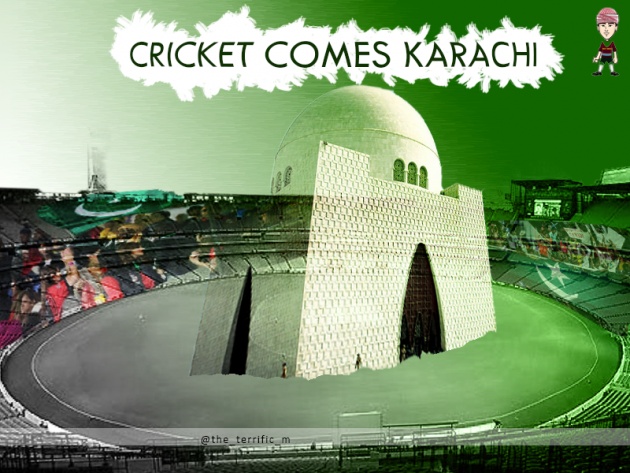 Image credit: Designed by me.

As I wrote in my earlier PSL blog that the biggest things about this event are, it provides a source of healthy entertainment to the viewers in Pakistan, as people belong from different cities support their respective teams under their city names. Second, and the huge thing was, it has become a reason for bringing cricket back to Pakistan. In the last PSL, the final match of Pakistan Super League was played at Gaddafi Stadium, Lahore. That was marked as a huge achievement, as the doors for International Cricket reopened after almost a decade.

So this year, the Pakistan Super League was far better and bigger than the PSL 2017. Unlike the previous editions of PSL, a couple of matches were held in Pakistan. Played from 22nd February to 25th March, Pakistan Super League 2018 group matches were played in Sharjah and Dubai. And as from the qualifiers of the playoffs, this league had shifted to Pakistan. Except for the final match, all the remaining matches were held at Gaddafi Stadium, Lahore (the host of last PSL final). Whereas, the final match between Islamabad United and Peshawar Zalmi was played at the National Stadium, Karachi.

This had been a great event for Karachi. Karachi, by being the largest city and financial hub of Pakistan was desperate to host this kind of events and at last but not least they’ve got as per their wish. The people of Karachi had shown a brilliant response in order to host the final of Pakistan’s biggest cricket festival. It can be easily estimated by this, the ticket of PSL 2018 which comprises of around 34,000 went sold in just the minimum time of 4 hours, although the server of the ticket-selling website got crashed several times.

Believe me, there was no pressure of playing the final. The pressure was all about the ticket requests.

That is how the website got crashed due to the heavy traffic of PSL Final ticket buyers.

More than anything, I too was among those lucky persons, who got their ticket of PSL final from the official website despite being waited for around 3 hours. It was going to be an emotional moment for me because the last time I went to the National Stadium, was approximately in my childhood to see the local tournament. Since then, unfortunately, the International Cricket has gone away from Pakistan so the lights and charm of this stadium. 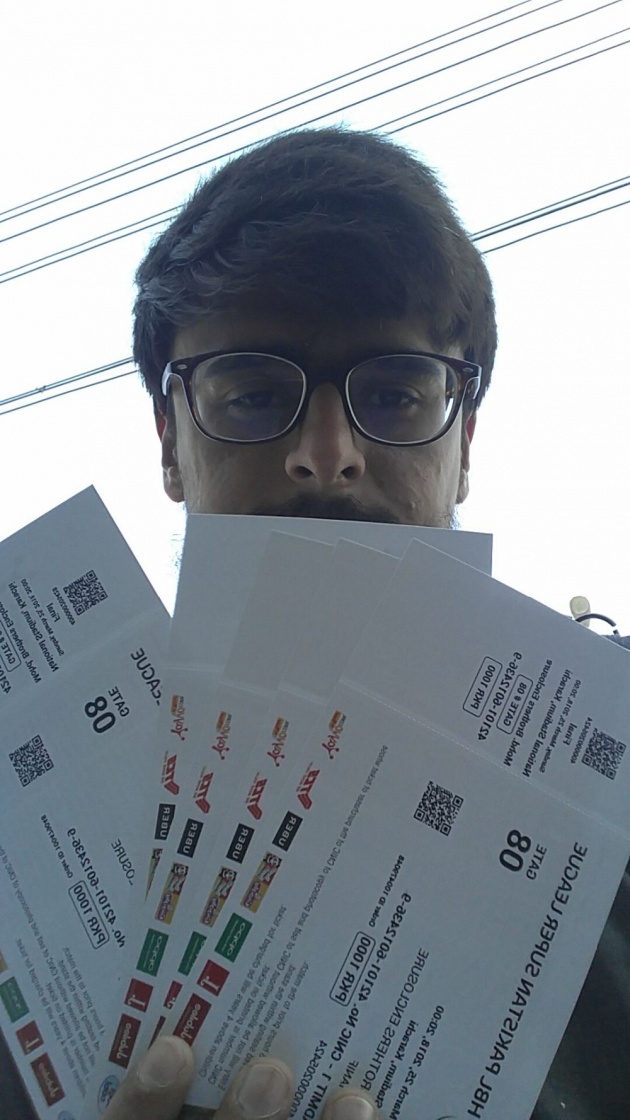 A selfie with my tickets of PSL Final.

But better late than never, I was finally going to witness a historic moment in my city. Together, I was pretty much excited too, and the coverage of our national media and preparations by the government had surely lifted up excitement to another level. The fever of PSL final also took the government of our province under its arms, the government did a wonderful job in terms of preparations, security arrangements, audience plan which proved to be an icing on the cake.

The gigantic signboards all over the city welcoming the cricket teams, the beautifully designed poster of star players on the streets and installing cardboards of players on the footpath, these were the activities which made this a distinguished event.

As I was supposed to be, I reached the National Stadium, Karachi to witness the historic final match of Pakistan Super League. To reach there at the stadium wasn’t as easy as it seems to be. I left home at 3:00 pm and reached the parking just after by 15 minutes. The entrance was like the sea of people that when I entered the stadium it was 5:30 pm in the evening. In fact, it took me approximately 2 hours only to enter the stadium from the parking area. This is how the Karachites emerged out to witness the historic PSL Final.

Queue outside the National Stadium Karachi to watch the PSL 2018 Final.

Despite the 37 degree Celsius temperature, the people of Karachi turned up in the huge amount at the National Stadium and made it fully jammed pack. For your information, the National Stadium, Karachi is the biggest stadium of Pakistan with a capacity of around 34,000 people in it. As mentioned before, the tickets have been sold out so it was going to be heartwarming to see the match. 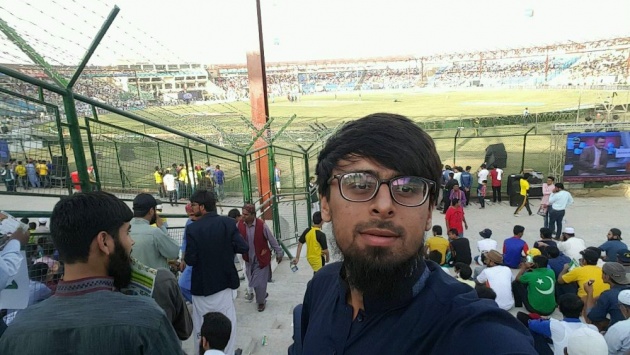 A Selfie at the National Stadium, Karachi.

The whole crowd was so passionate that it kept roaring from the beginning, chanting slogans of “Pakistan Zindabad”, cheering for their favorite teams and turned the atmosphere of the whole stadium lit. Time to time the DJ in the hosting box was also warming our blood. Plus a concert in the name of ‘closing ceremony’ was also organized by the Pakistan Cricket Board at which the Star singers of our country include the renowned musical band “Strings”, Aima Baig, Farhan Saeed and the singer of Pakistan Super League's official anthem Ali Zafar. 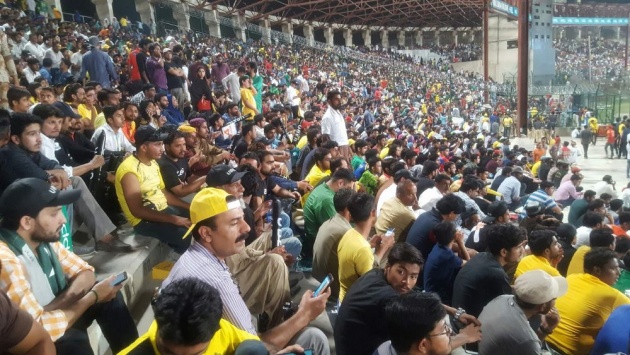 Image credit: captured by me.

A glimpse of crowd at the National Stadium, Karachi.

Goosebumps - Just before the start of the match, a National Anthem ceremony was held, in which both the team along with the thousands of crowd together sang the national anthem of Pakistan. After the final between Peshawar Zalmi and Islamabad United, both the champions of the previous editions of PSL was started and ended on the victorious note for Islamabad United as they became the champions for the second time in the Pakistan Super League.

The winner of PSL 2018 Islamabad United celebtrating their victory.

Can’t get better than this… 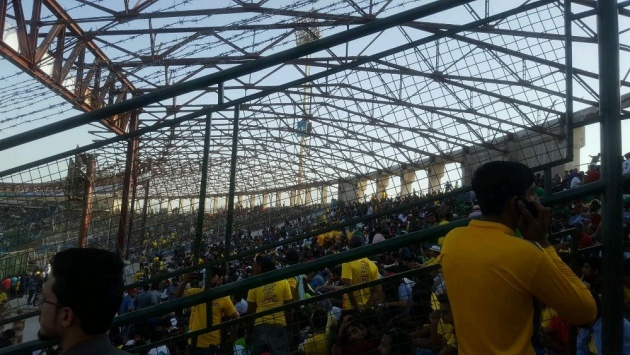 Image credit: Captured by me.

The mighty shot of National Stadium.

It can’t get better than this, and especially for a city who has remained a victim of terrorism badly for over a decade and suffered the most as a city of Pakistan. It was breathtaking to see the smiles on the face of thousands of people of our city, sharing their joyful moments safely on the occasion of Pakistan Super League final at the National Stadium.

It is delightful to see that my city is reviving again. And remember, it is still the city that never sleeps as well as the city of lights. The people of Karachi had shown the world through the PSL final that not only Karachi but the whole Pakistan is safe and peaceful and we are sports-loving nation too. You can come and play with us without being scared. On this wish that my country remains always peaceful, I would end this blog. Hope you’ve enjoyed reading it. Thanks for reading it.