Cruise and the coop 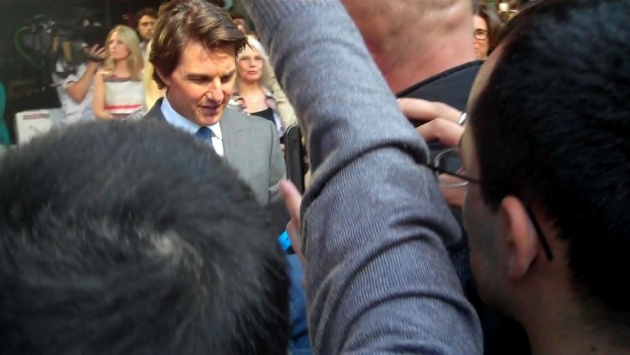 Our Saturday afternoon pastime, should the weather hold is to stand in wait, squared by so-called crash barriers, for the modern movie phenomenon that is Tom Cruise. We are like battery chickens – battery chickens with i-phones. Our grain of hope is the promise of merch. Much merch? Merch isn’t worth the turn to mush. Oh, at the opportunity for 20 of 200 blue wristband holders to enter the palace that is the BFI IMAX Cinema in London’s Waterloo (‘Sarf of the river – not going there, mate!’) to watch the UK premiere of Mission Impossible: Rogue Nation. There is a colon missing in the title, I am sure. Some of us may need a colonoscopy by the end.

Of course, we want to pose for a photograph with Mr Cruise, get him to autograph a photo, book, VHS video cover or six. Fans have the latter mounted on cards for ease of signing. Personal treasure or eBay sale item - you don’t want to ask.

The process begins at an earlier hour. Overnight celebrity spotters wait until 9am to collect the aforementioned blue wristband (numbered 1 to a 200) for admittance to a VIP crowd holding area at 1:30pm that day. VIP is a relative term. You don’t get water and snacks and easy access to the rest room. You get the assurance of a viewing position; protection from other members of the public, who are bigger, burlier and later than you. You have the chance to form a community of lonely souls addicted to the flash buzz of giveaway fever. You want it – you know you do.

Your purpose: to make those who arrive feel like their work matters. Is this true? No, rather you are part of the film’s advertising. You want to see the film, separated from the cinema only by crash barriers, security and the legitimacy of an invitation. That must make others want to see the film. This isn’t true either. You are there in a controlled environment to have your fandom managed. Your assumed desire to have a close personal moment with a celebrity is limited to a few seconds of impersonal contact. Will Mr Cruise remember your name or your wristband number? Will he compliment your badly drawn artwork which you ask him to legitimise with a signature? Will he have seen you before and greet you like an old retainer, the doorman at the Dorchester who didn’t scratch his car and otherwise performed no valuable service but was just there standing, in all weathers?

There is a code of conduct for us coop-crazy hens (one of us did indeed like Bradley Cooper). Once you have a place, you keep it. Please do not graze me with your backpack or assume a familiarity that I did not invite.

Conversations bubble. Will the weather hold? Are you a fan of Arrow? Some are nervous of how to behave amongst strangers. Images on mobile phones are shown to one another. This is me with – Where is this? Birmingham. These are trophies. We look at the dead animals, the metaphorical spread-eagled tiger rug next to a kid in a T-Shirt. Is that really what Ralph Macchio looks like now?

There is the late comer who disturbs the picnic, barging others, wanting a better position. She, a woman of Asian extraction (strange word ‘extraction’ to be applied to a person), succeeds in putting others backs up. ‘She’s care in the community,’ moans a younger woman far from the commotion as a Chinese gentleman snaps at the agitator for having no respect. ‘Go back to Tenko!’ Is anyone laughing at her racism, worse in the final analysis that this well-dressed but possibly lost soul who just wants to know what the Rogue Nation is? The absence of a blue wristband counts against her. She is coaxed out of the coop by security. The younger woman at the front is grateful. It’s the rules.

We have been standing for two hours when it is feeding time. A smartly dressed TV presenter, accompanied by the silent Sophie (why have you introduced her and not yourself) walks the circumference around the IMAX cinema with a microphone and the promise of a golden wristband (allowing admittance to the cinema) and the aforementioned merch. Merch is an interesting term for the T-Shirts, mono-graphed tablet covers and speakers that we’re offered. You cannot buy it so the mercantile process doesn’t apply. Perhaps you can trade.

We are excited. Our blue wristbands go in the air. One of us gets the early prize of asking a question to director Christopher McQuarrie to be broadcast at a later date. There is music blaring as the take proceeds – isn’t this a problem? At any rate, the giveaway begins. Blue wristband numbers are called. 137! Mine is 138. Enthusiasm and arm-chancing stimulates those with the wrong number to put themselves forward. Some of these win a T-Shirt. ‘It’s my birthday today – I’m 38.’ Well, everybody join in for a chorus of happy birthday. The crowd isn’t in the mood for singing. They want the movie tickets!  They want merch. You want the giveaway to last as long as possible, even as you count down the available tickets. You are, of course (given the odds) not selected.

A French woman wins a wristband and gives it to her son. Both go to a separate holding area and she gets one too. She makes a telephone call to convey her excitement. There is another boy, parentless, from a South Asian family, who isn’t shown the same day-making courtesy.

Security counts the people in the pen. There are more re-counts than the majority of elections. Then he arrives. Mr Cruise. Early, smiling, waving – gestures practiced and honed. There is an expression: working the crowd. Cruise doesn’t work them. He dances between groups with balletic solidity; a quick snap here, a signature there. He gives them his time. It is part of the process, polished but impersonal.

What does he say about the old woman’s drawing? From where I stand, it is mission impossible to hear anything.

At 6:15, an hour and a quarter before show time, Mr Cruise disappearing to the next group, I leave. Rebecca Ferguson has been interviewed, her answers less polished, nerves and a sense of the crowd resisted with a smile. I and hundreds of others are told that Simon Pegg has arrived as I make way onto Waterloo Bridge, a seat on a bus and to visit a cinema (Picturehouse Central) that will actually let me in.