I discovered Death Note some twelve years ago or so. I got sold on the manga immediately, and shortly after on the anime series, though the latter was slightly less satisfying (it is very close to the manga, which is both a strength and a weakness, since there isn't that many different things to discover in it).

Death Note tells the story of YAGAMI Light, a gifted youth, slightly bored in life, who one day finds a strange diary in the schoolyard. Filled with rules about how to kill people by just writing their names and thinking of their faces, this diary looks like a well-made prank, until Light tries it... and realises it really works. From there, he meets the shinigami (death god) Ryuk, who follows the notebook, and decides to use this newfound power to punish criminals and usher in a new era of well-behaved citizens. 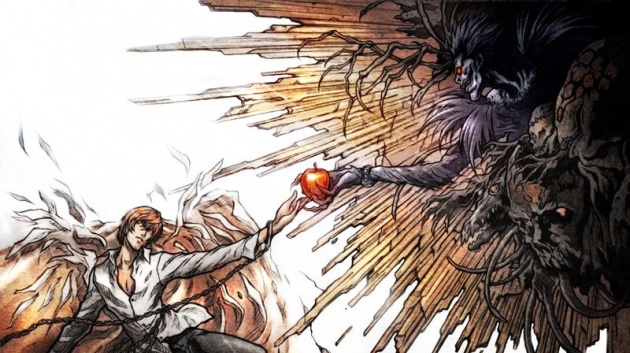 Image credits: Light and Ryuk by RobDuenas via deviantART

Death Note is full of themes that fascinate me. Good versus Evil. The road to hell being paved with good intentions. Scheming young people too clever for their own good, engaged in a game of cat and mouse: Light and L, the mysterious and quirky investigator who's sworn to bring down 'Kira' (Light's nickname as the 'God' of the new world he wants to build—and the Japanese pronunciation of killer). Ethics and morality: is Light really better than the criminals he swiftly kills? Do the ends justify his means? Treachery, foiled plans and Xanatos gambits abound in this series, and I have a soft spot for those, as well as for manipulative protagonists who also don't hesitate to get their hands dirty, rather than always play the Chessmaster. And let's be honest: only Death Note could turn writing with a mechanical pen into something epic.


So after reading the manga (several times), and watching the anime series as well as the live-action films, the next logical step, when I learnt there was a movie on Netflix, was to watch it as well.

[Death Note] follows the story of an American high school student named Light Turner, who finds a mysterious supernatural notebook known as the "Death Note". After being visited by a demonic Japanese god of death named Ryuk, who relays him that the book causes the death of anyone whose name is written within its pages, Light eventually begins to kill people whom he deems unworthy of life, under the alias of a serial-killer named "Kira", in a bid to change the world into a utopian society without crime.
— From the Death Note movie page on Wikipedia

The obvious: A change of setting

At first sight, there aren't many differences, except that the story isn't set in Japan, but in the United States, and that Light as well as the other characters are now American. This was a can of worms in and of itself when the movie came out—still is—and as of now, I remain unsure where I stand regarding this. On the one hand, a complete copy of the original wouldn't be very interesting, and whether the story happens in Tokyo or Seattle is not the essential part for me; also, let's not forget that L is a clear counter-example here, since the actor playing him, Lakeith Stanfield, is definitely not white. On the other hand, there was no real justification or need to erase the franchise's Japanese origins—whitewashing happens way too often both in movies and in literature (I've stopped counting the amount of book covers that show a white character, when the protagonist actually isn't).

In my opinion, it's not what breaks the movie, but it definitely doesn't help. Because the differences keep piling up after that, and not for the best.


Too similar, or not enough?

The movie constantly comes and goes in its attempts to differentiate itself from the original. Some are bold and daring; others just fall flat, or plain silly.

Not the most shining Light ever

Light's family is reduced to its simplest expression here: he lives alone with his father, a cop, since his mother was killed in a hit-and-run. So no Mum or sister here to provide a familial backdrop to be used against Light later. This is a storyline choice that may or may not work depending on the viewers. In my opinion, it was a valid choice: it provided Light with a reason to try the 'death note' that was less superficial than just 'must be a joke, but let's see if it works.' At the root of Light Turner's descent into becoming Kira is a desire for revenge, which from the onset makes us realise that his motives are both pure and tainted at the same time. He still does pursue the same goals as Light Yagami, to rid the world of crime, but his flame definitely burns darker.

Another important difference is that Light Turner, while still gifted and slightly bored in life, is not the popular and charismatic persona that Light Yagami is. Those latter traits were important for me in the manga and anime series: they're part of what makes Light Kira, they justify his arrogance and the feelings of superiority that pervade his reasoning and make him both brilliant and liable to commit mistakes. By contrast, Light Turner is more on the emo and bullied side, a friendless character not by choice but by circumstances, who finds shelter in his own inner world. And in a way, this isn't a bad idea—this Light is reminiscent of those people who fly under the radar, then suddenly go on a rampage—but it still robs him of a certain kind of presence that would've worked well with the dramatic angle worked from the beginning into the Death Note series. 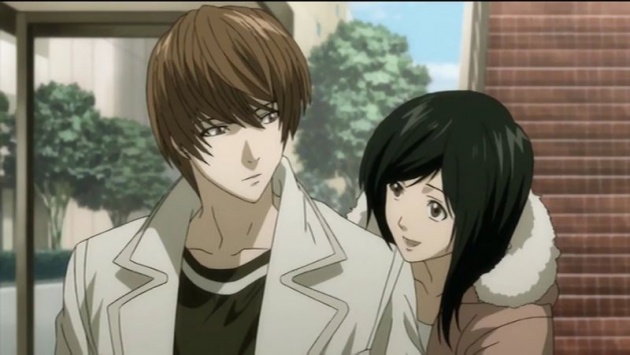 Image source: A more charismatic Light on a date in the anime, via Fandom/Wikia

One thing to be said about Death Note in general is that it relies on strong imagery, resting on the use of dramatic poses, goth clothing, music filled with ominous Latin chants, and themes closely related to Christianity—the fact that Ryuk loves eating apples is clearly a wink at Genesis and the fruit of the Tree of (forbidden) knowledge. It may be a little far-fetched and too heavy at times, but as an artist myself, I can't deny that it's also a fountain of inspiration.

The movie pursues this as well, through strong contrasts, gloomy scenes of Seattle under the rain, and a sort of ironical undercurrent. While it loses the goth aesthetics (which were especially prevalent as far as AMANE Misa, Light's girlfriend, was concerned), it plays on a different kind of darkness, which gives the movie an intriguing atmosphere.

Nevertheless, there seems to be a lack of decision about what genre exactly this movie is meant to fit in. It has moments bordering on dark comedy (willingly or not—Light's scream when he first meets Ryuk is particularly ridiculous), but also turns at times into gore fests taken much too seriously. And I won't even mention the ending, whose predictability only disputed it to the feeling of boredom it elicited in me.

Too much in too little time

The major flaw for me is that the movie tried to cram too much into a condensed form (contrast this with the 12-volume long manga). Heavy shortcuts had to be taken, which left no room to properly develop character relationships. One of the bigger strengths of the original Death Note were how its main characters interacted in a blend of manipulation and plot twists. Even Misa, whose smarts can't compete with Light's or L's (in the way no one can compete with, say, Sherlock Holmes), also builds schemes of her own: she tries to make the police believe that she is Kira, when in fact her true aim is to get Kira's attention and work along with him. In this way, her relationship with Light Yagami, as twisted and unhealthy as it is, was built over time, through more than a meeting.

However, in the movie, the time constraints make it so that there's not enough room left for this, for the gambits and plot twists that made Light's relationship with L, and later with Near and Mello, so exciting to see unfold: every new chapter was an occasion to wonder what their next move would be, and who would be able to finally outsmart the other. Just as bad, Ryuk is completely sidelined, relegated to a few comments and sneers (albeit with excellent voice acting) and to lurking in the background, which is a shame.

In the same vein, in the 2017 movie, the romance between Light Turner and Mia Sutton (Misa's equivalent in the movie... or not really?) happens almost at once, and with no chemistry. Granted, there is another aspect to that relationship, in that Mia is mostly interested in the death note, whereas Misa only lives for Light, with the notebook being just a means to that end. One can argue that this choice empowers her character, as someone who decides for herself instead of blindly following Light—even if her decisions are morally wrong. Alas, this isn't enough to make her character arc work, and so the upcoming betrayal has a lukewarm impact at best.

In the end, what I liked most about Death Note: The 2017 Movie was Lakeith Stanfield's performance (if you except the fact that the scenario makes him reach for a gun at some point, something L would never do). Somewhat forced into the quirks and mannerisms of his role, I believe he still managed to shine through. I can't say that much about the other actors, or the story as a whole. 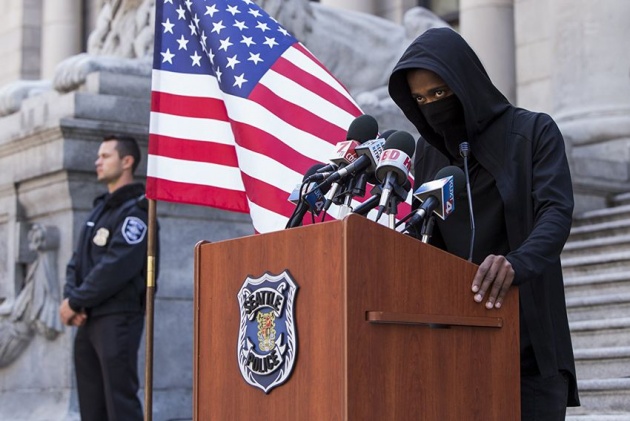